ONEOK (NYSE:OKE) reported its third-quarter earnings on Tuesday. The midstream operator's earnings rose both sequentially and year over year, driven by strong natural gas liquids volumes and lower costs. While the company's operational performance has improved significantly compared to the second quarter, the same can't be said about its balance sheet. Let's dive deeper into ONEOK's results to understand where the company and its stock could be headed.

The first thing that stands out in ONEOK's Q3 results are its natural gas liquids (NGL) volumes, which rose above pre-pandemic levels. NGL throughput volumes increased 7% compared to the year-ago quarter. The growth was driven by new plants connected to the company's systems, including its Demicks Lake II plant. While ONEOK's NGL volumes rose, its gas gathering and processing volumes fell year over year, partly due to production cuts in the Williston Basin in North Dakota.

ONEOK also did a great job in cutting its operational costs. It managed to reduce its costs by 16% compared to the third quarter of 2019. Examples of ONEOK's cost reduction efforts include idling plants temporarily where possible and reduced contract labor costs, as the company could manage the lower volumes with permanent employees. 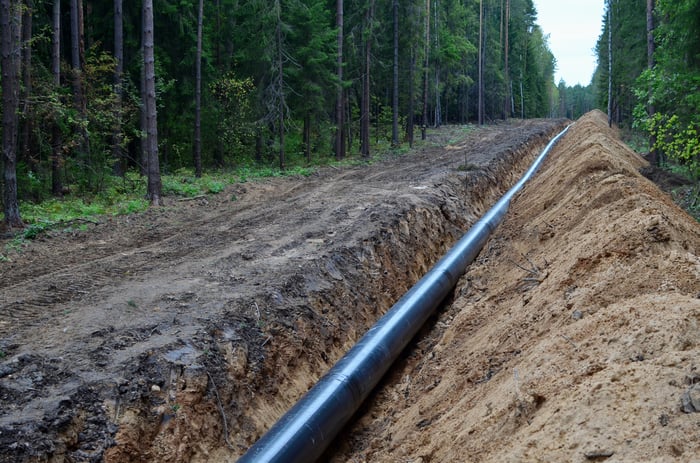 Higher NGL volumes and reduced costs helped drive earnings higher across all three of ONEOK's segments. Overall, ONEOK's adjusted EBITDA rose 15% year over year and 40% sequentially. As long as demand doesn't fall back to Q2 levels, strong NGL volumes may continue to support ONEOK's earnings. Indeed, ONEOK expects to achieve double-digit earnings growth in 2021 based on its conversations with producers so far.

On the positive side, as ONEOK's ongoing capital projects are largely completed, it anticipates only $300 million to $400 million in annual capital expenditures going forward. The company will raise its spending in the future only when the demand for infrastructure rises again. That should allow it to slowly repay its debt over time with the cash left after dividend payments. However, if earnings fall short of expectations, ONEOK may need to cut back on dividends to avoid increasing leverage further.

ONEOK generated distributable cash flow (DCF) of $540.9 million during the quarter, which covered its dividends for the quarter by 1.3 times. That was a welcome development from the previous quarter, when the coverage fell below one.

As anticipated, ONEOK is benefiting from improved NGL volumes, though deleveraging remains slow. The company's capital discipline and cost reduction efforts, combined with improved earnings, positions it well for reducing its debt load over time. However, any disruption in earnings, as happened during the pandemic, may put ONEOK in a tough spot due to its high debt levels.

Nonetheless, with enough earnings to cover dividends, ONEOK can now look forward to its planned debt reduction. I don't see any major hurdles for the company to achieve that. This makes the stock's yield enticing for long-term investors with a medium risk appetite.