Many of us want to forget this year, but investors in these three companies will be especially eager to put 2020 in the rearview mirror.

A 2019 paper in the journal Neuron evaluating the connection between memory and intelligence arrived at a welcome conclusion for many of us. Forgetting information isn't a malfunction of the brain. Instead, it's a healthy tool for better understanding information or getting rid of information deemed unimportant.

While 2020 has been a year many would like to forget for various reasons, stocks are back near record levels, and the precipitous drops in the darkest days of March are, for the most part, a memory. Share prices aside, some companies and their investors will be happy to turn the calendar to a new year as soon as possible. Eastman Kodak (KODK 0.75%), BioMarin Pharmaceutical (BMRN -0.57%), and Livongo Health (LVGO) are three companies eager to put 2020 behind them. 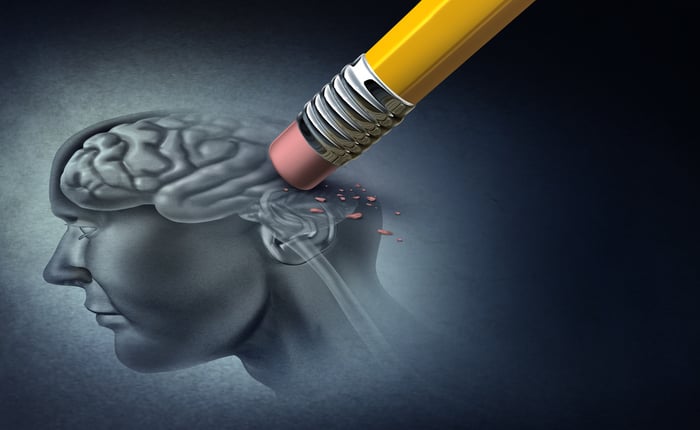 Kodak, founded in 1880, got its start manufacturing dry photographic plates. By 1981, the company was generating $10 billion in revenue making cameras. Last year, Kodak had only $1.2 billion in sales and had not produced positive free cash flow -- cash generated by the company after accounting for all cash outflows -- since emerging from bankruptcy in 2013. All of that negativity seemed to turn around in late July, when President Trump announced a $765 million loan to the company to create key chemical ingredients for COVID-19 treatments. Unfortunately for Kodak, it was only a letter of intent, but the news sent its stock soaring from $2.62 to $60 per share.

As it turns out, executives had been hurriedly granted stock options, insiders sold shares, and a board member donated nearly $100 million in stock to a charity he founded. Despite an internal investigation that eventually absolved executives, the loan remains on hold as the U.S. International Development Finance Corporation -- the agency responsible for arranging the deal -- has their inspector general investigate.

Although the stock sits 300% above where it was before the agreement was announced, the loan seems unlikely to come through. As the Securities and Exchange Commission (SEC) continues to investigate allegations of insider trading, Kodak has been left wishing that certain bits and pieces of 2020 never happened.

BioMarin makes therapies for patients with very rare disorders. Because the diseases its products treat are rare, there isn't a huge addressable market. Often, the total number of potential patients is only 1,000 people across the globe, most of whom are children. Because there isn't a lot of volume but drug development is expensive, the company is able to charge extremely high prices for its life-saving treatments. For example, it was rumored that BioMarin's drug Roctavian -- which eliminates the need for many hemophilia patients to undergo expensive, frequent infusions of blood-clotting therapy -- would cost $3 million per patient.

The clinical trial of Roctavian are what BioMarin investors will certainly want to leave behind in 2020, after the company received the thumbs-down from the U.S. Food and Drug Administration (FDA) in August. Despite an earlier agreement between the two parties about data collection, the FDA asked management to finish its phase 3 clinical trial and provide two years of follow-up data. This new requirement promises to take the study into November 2021. Upon the news, the stock dropped from $118 in August to $75, where it still sits today.

Roctavian would be the first gene therapy approved for adults with hemophilia A. The therapy relies on an infusion of an inactivated virus to deliver a necessary gene to the liver. After receiving this gene, patients' own bodies are able to make a missing clotting protein. Despite the extreme drop in the stock price, the treatment is merely delayed, not rejected. Even with the headache of a deflated stock price and the wait for additional data, it seems that 2021 may be a year BioMarin investors can look forward to, once the extra year of follow up data is collected. Investors with more patience than the market should consider adding this drug maker in anticipation of the first gene therapy for hemophilia. 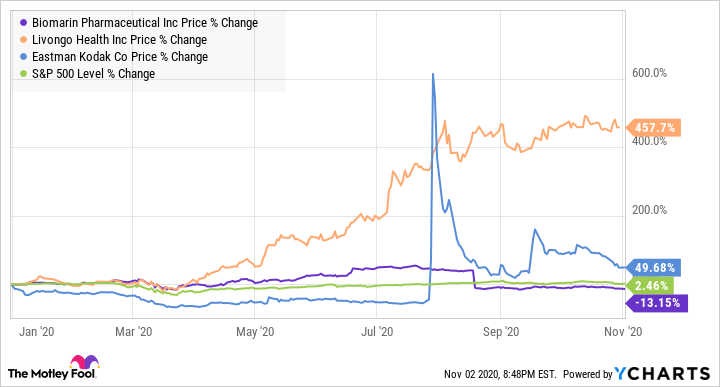 Livongo has consistently delivered eye-popping revenue in its short history as a public company. In its July 2019 initial public offering (IPO), shares surged 62% on the first day. Its chronic disease management and coaching services connect to wearable devices, and are a perfect fit for an industry just learning how to leverage technology to produce better outcomes. The company's focus on diabetes -- a disease with healthcare costs averaging 2.3 times more for those diagnosed -- was another detail that excited investors.

After following up 122% sales growth in 2018 with 149% in 2019, the company was on its way to the hyper-growth hall of fame. Although the pandemic has cost many lives, the company's remote monitoring solutions played a pivotal role in allowing many patients with chronic diseases maintain contact with caregivers and manage their health. Despite the circumstances, investors anticipated more growth. The stock skyrocketed once it became clear that even diabetes patients who had been hesitant to adopt the technology would now need to embrace remote care.

All of that positivity is what made it seem so odd when Teladoc (TDOC -5.33%) agreed in August to buy Livongo for $18.5 billion at a 10% premium. Both stocks reacted negatively, and while opinions are split, many investors still scratch their heads at management's decision to sell out just when things were going great. Profitability also seemed within reach, as the six months ended June 30, 2020 showed operating margins of -4.4%, compared to -40% for the same period in 2019. This was confirmed in management's third-quarter earnings report this week. The business produced positive adjusted earnings on 126% sales growth.

The combined entity may go on to dominate telehealth for decades, but a company doubling sales every year, focused on one of the biggest drivers of costs in healthcare, and using data and remote monitoring seems like a can't-miss prospect. I can't help but think that Livongo's investors will want to forget 2020 -- not because of what happened, but because of what might have been.