Let's face it, medical insurance companies aren't all that exciting. Sure, they have predictable cash flows, but to the average investor, they are about as fun as an actuarial table.

Maybe that explains why the share prices of CVS Health (NYSE:CVS), Cigna (NYSE:CI), and Anthem (NYSE:ANTM) are all down for the year, despite the fact that they're all still making a nice profit and have fared relatively well during the pandemic.

All three are underpriced in my opinion, as they trade for 14 times earnings or less. On top of that, each pays dividends and sports a return on equity (ROE) of 11% or more. 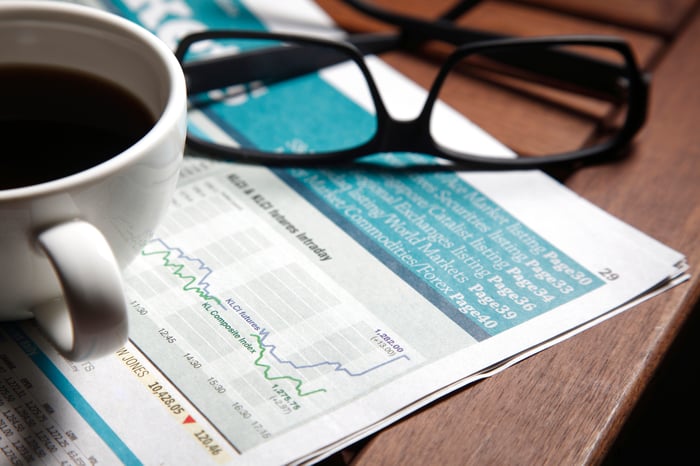 CVS may be misunderstood

The problem with CVS Health is that people think of it merely as a pharmacy company. That's just one facet of its business and, increasingly, its least profitable segment. In the first six months of 2020, the company's total revenues were $132 billion, up 5% year over year. While CVS said its pharmacy services segment saw a growth of 2% in revenues compared to the first six months of 2019, the company's retail segment revenues grew a reported 3% in the same period. The segment that grew the most was its healthcare benefits division, which had a reported rise in revenues of 6% year over year. Through the first six months, CVS added 134,000 people to its medical memberships, which include various Medicare and Medicaid insurance products.

On top of that, CVS said it had administered nearly 2 million COVID-19 tests through July, and that number will only continue to grow. The company has also invested heavily in telehealth operations. It said in the second quarter that it has seen a 15% increase in HealthHUB visits for chronic services and Aetna members. CVS said it expects to boost its telehealth and digital capabilities in 2021, including the addition of behavioral health support.

The focus on saving costs in healthcare benefits is paying off. The company reported $4.9 billion in net income through July 31, up an incredible 48%, prompting the company to raise its guidance for earnings and cash from operations through the year.

Despite all of that, it remains a bit unpopular, with a price-to-earnings (P/E) ratio of around 9.2. A typical healthcare stock has a P/E of 24. This provides a good buying opportunity for investors. 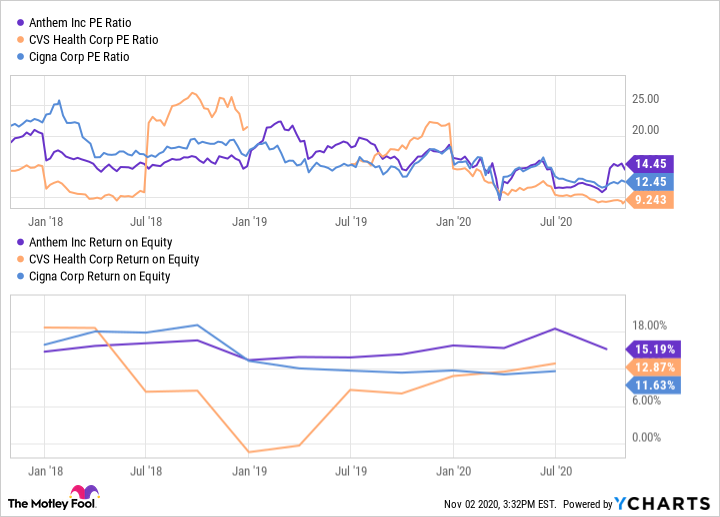 An Anthem worth standing for, or waiting on

Anthem's shares are down more than 5% for the year -- an almost comical dip when put in the context of the company's year-to-date performance. Last Wednesday, the medical insurer released its third-quarter report, reporting revenue of $30.6 billion in the third quarter of 2020, a rise of 15.9% year over year, attributed mostly to higher premiums in Medicaid and Medicare.

In response to those numbers, the company's share prices dropped nearly $14.

To be fair, Wednesday was a really bad day for the market overall, and not every aspect of Anthem's report was rosy. The company's total operating margin was 6.4%, identical to last year's margins at this point. Another negative is that a lot of an insurance company's money comes from investments, and Anthem said it had $591 million in investment revenue in the first nine months, down 19.8% from the same period in 2019.

Despite that, the company is on track for its 10th consecutive year of revenue growth. Make no mistake, this company is still growing. Anthem added 1.6 million people to its medical enrollment in the third quarter, up 4% year over year, because of its growing national and Medicare/Medicaid business.

Anthem offers a quarterly dividend with a yield of 1.37%. This year, the company raised its dividend 18.8% to $0.90 per share, the 10th consecutive year the company has raised its payout to investors.

Cigna is carrying plenty of momentum

Cigna's stock is down more than 19% year to date despite positive financials. The company has increased revenue for nine consecutive years. It had a phenomenal year last year, with $153.7 billion in revenue, more than three times what it posted in 2018, and $5.1 billion in net income, up more than 28% over 2018.

This year, the company said it's on track for between $154 billion and $156 billion in earnings and $5.8 billion in net income. Considering some pandemic headwinds, those numbers make Cigna's business look strong.

In the second quarter, revenues in all of the company's divisions were better than reports from the same periods in 2019. Cigna's pharmacy services segment, which includes benefits management, specialty pharmacy services, clinical solutions, home delivery, and health management services, was up 22%. Its integrated medical segment, which includes Medicare Advantage, Medicare Supplement, and Medicare Part D plans, Medicaid plans, and individual health insurance coverage, was up 3%. The international markets segment was also up 3%, and group disability was up 1.5%.

About the only thing Cigna doesn't have that the two previous stocks have is a decent dividend. It pays out $0.04 per share annually, a tiny yield of 0.02%.

It's buying season for savvy investors

All three of these stocks offer nice buying opportunities at their current prices. They fit the textbook definition of value stocks-- stocks that are undervalued considering the amount of earnings they bring in.

All three present good long-term options to investors. Cigna's recent growth makes it the easy winner for me among the trio, even with its relatively penurious dividend. Next, I like CVS because of its growth opportunities and consistent dividend. Anthem should also shoot up soon. I think the timing of its third-quarter report, on a day the Dow was dropping, was unfortunate, but once investors and analysts have time to thoroughly comb through the report, Anthem should rebound.