While stocks can be grouped in a variety of ways, such as by industry, one of the most common methods of categorizing various companies is by market capitalization. Small-cap stocks are companies that have a market capitalization of at least $300 million, but no higher than $2 billion. The thing investors like most about small-cap companies is simple -- sometimes, these stocks don't stay so small.

Case in point: Clinical-stage biotech Novavax had a market capitalization of less than $200 million one year ago. Fast forward to today, and high hopes about the company's COVID-19 vaccine candidate and potential flu vaccine have driven its market cap to more than $5.6 billion.

Online pet pharmacy PetMed Express (NASDAQ:PETS) and grocery company B&G Foods (NYSE:BGS) are small-cap stocks that have weathered the volatility of this year's stock market particularly well. Both businesses serve sectors of the consumer public that are far less likely to be affected during times of economic downturn and have reported excellent sales growth throughout the pandemic. At the time of this writing, PetMed Express boasts a market capitalization of $623 million while B&G Foods has a $1.88 billion market cap. Let's take a closer look at both. 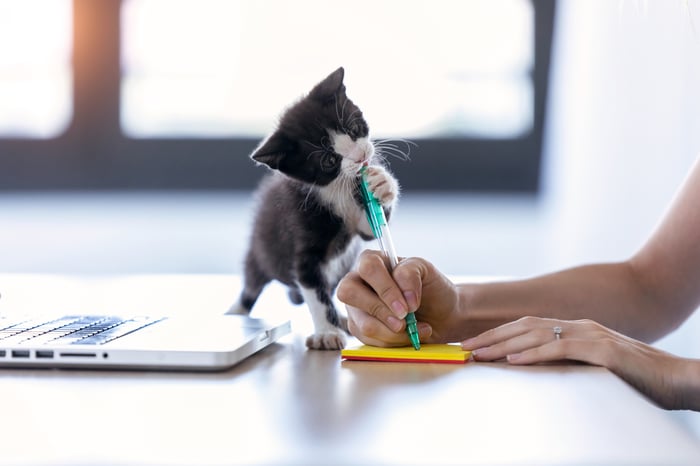 Founded in 1996 and headquartered in Delray Beach, Florida, PetMed Express sells supplements and medicines for pets. The company reported a 20% boost in its overall sales during the first fiscal quarter of this year (which ended on June 30), along with a 47% increase in diluted earnings per share. The company finished out Q1 with $96.2 million in net sales and gained 186,000 new clients during the three-month period. New order sales in the first quarter rose by 29% on a year-over-year basis, while reorder sales were up 19% from Q1 2019.

Shares of PetMed Express have fluctuated this year, and are currently up about 30% from January. The stock trades at just around $30 and pays a dividend that yields a little under 4%, far above the average S&P 500 stock's yield of 1.8%. Analysts project that the company will grow its earnings by more than 11% per year over the next five years.

Founded in 1889, New Jersey-based B&G Foods boasts a wide range of over 50 consumer staple brands in its toolkit, including Cream of Wheat, Dash, Green Giant, and Ortega. On Oct. 26, the company announced it would be acquiring shortening and oils brand Crisco in a $550 million cash deal.

B&G Foods reported positive net sales growth in both the first and second quarters of this year. During the first quarter, which ended on March 28, sales were up 9% year over year, and the company boosted its net income by close to 70%.

B&G Foods' second-quarter results for the three-month period ending on June 27 blew its first-quarter earnings out of the water. The company increased its net sales by 38% year over year during the second quarter of 2020 and grew its diluted earnings per share by an impressive 150%. In its Q2 earnings release, B&G reported a 146.1% year-over-year increase in its net income and a solid net cash position of $246.4 million, although the company had $2 billion in long-term debt at the end of the second quarter.

Out of the B&G Foods' $512.5 million in Q2 net sales, it reported excellent gross profits of $134.1 million, which comprised roughly 26% of its net sales for the three-month period. The company's second-quarter profit margin was also up slightly from the previous quarter, in which the company reported gross profits that comprised 23% of its net sales. B&G Foods closed the second quarter with $181.2 million in cash and cash equivalents. The company reported its third-quarter results on Nov. 5 following the close of business.

Shares of B&G Foods have risen 63% since January, although the stock currently trades well under $50 at just 16.5 times reported earnings. The company's price-to-earnings (P/E) ratio is comparable to that of well-known competitor General Mills (NYSE:GIS), which trades at about $60 at 16.3 times earnings. B&G Foods is an especially attractive buy for long-term investors due to its high-yield dividend, which sits at 7%. If you're looking to add a winning dividend stock to your portfolio before the next market crash that won't break the bank, B&G Foods is a company you can buy and hold for decades to come.

While PetMed Express has a ways to go before hitting the mid-cap mark of $2 billion, B&G Food's market cap is sitting just below that point. Small-cap stocks are generally accompanied by a higher element of risk than those with larger market capitalizations. However, it's important to emphasize the fact that both of these companies experienced strong growth during a period of intense economic distress that has been more than a pain in the side for many mid to large-cap companies across the stock market.

Over the next five years, analysts project that B&G Foods and PetMed Express will grow their respective earnings by 6% and 11% on an annual basis. But based on what we now know about these two relatively inexpensive small-caps, those analysts' projections aren't the only reasons why you might consider adding these two recession-proof stocks to your portfolio.