Last week's stock market sell-off means investors can now buy great companies at cheaper prices. Industrial stocks that ebb and flow with the economy can be a great way to grow your savings and support the backbone of American business.

If you happen to have $10,000 burning a hole in your pocket -- or even some other amount -- Lockheed Martin (NYSE:LMT), Southwest Airlines (NYSE:LUV), and United Parcel Service (NYSE:UPS) are three excellent industrial stocks to buy for the long term. 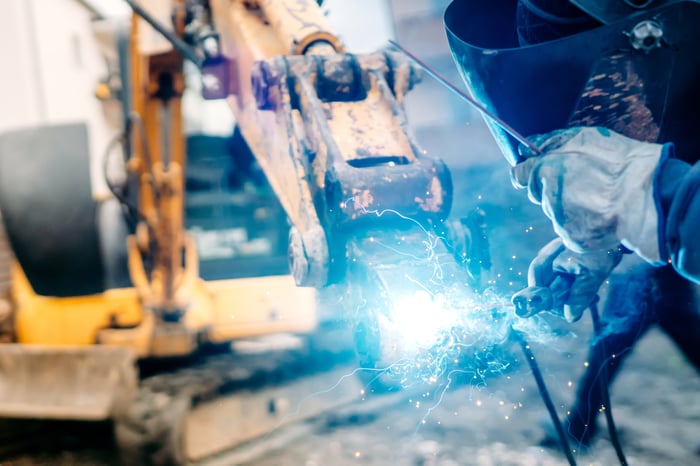 For short-term investors, aerospace and defense giant Lockheed Martin is a risky proposition in an election year. U.S. defense policy is a heavily debated topic between America's two largest political parties, which is one of the reasons why Lockheed and its peers have underperformed the market so far this year.

For long-term investors, Lockheed Martin remains a solid industrial option. Despite growing revenue and net income, the company's P/E ratio is near a five-year low. 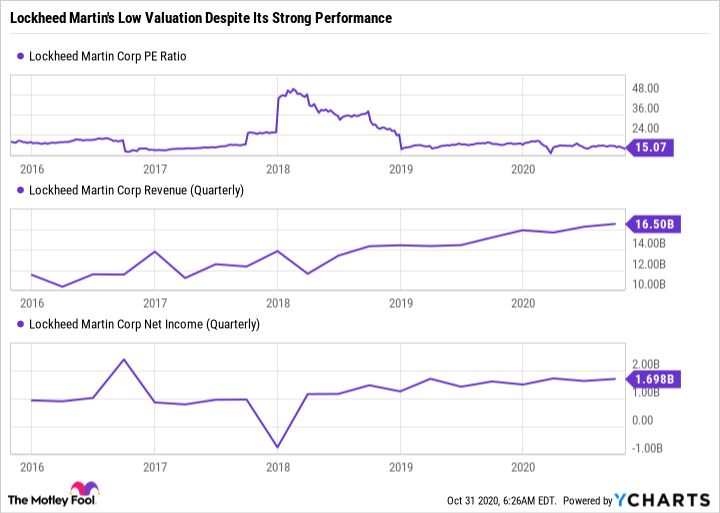 One of Lockheed's most attractive features is its backlog, which provides a level of certainty for future earnings. In its third-quarter announcement last month, Lockheed reported its ninth consecutive quarter of backlog growth, achieving a record $150.4 billion backlog.

To compensate investors for holding the stock over the long term, Lockheed Martin has done an excellent job of raising its dividend, which has grown an astounding seven-fold over the last 15 years. The company yields 3% at the time of this writing.

Airlines have been one of the hardest-hit industries during the pandemic as flight schedules and bookings went from predictable to completely up in the air. Given that airline stocks are trading at a discount, but are unlikely to fully recover anytime soon, whether you feel comfortable buying or selling airline stocks right now will largely depend on your time horizon.

Despite its pandemic-induced struggles, Southwest Airlines remains an excellent stock to own over the long term. The company just reported better-than-feared earnings as its daily cash burn rate declined from an average of $23 million in the second quarter to an average of $16 million in the third quarter.

Aside from improving its cash burn, Southwest continues to have the best balance sheet of the major U.S. airlines. 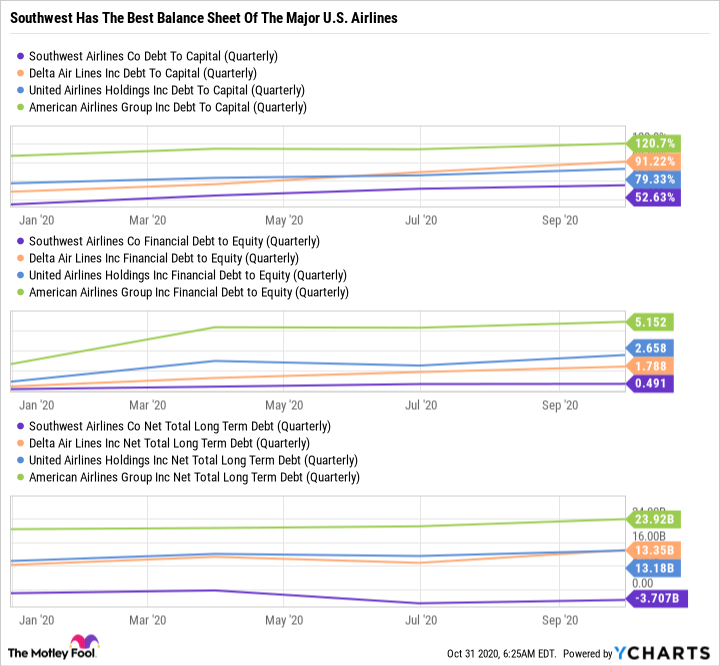 After raising a substantial amount of cash, management thinks that Southwest has enough cash to get through at least the next three years, giving the company an ample cushion in case air traffic remains down. Luckily for Southwest, air traffic is improving.

According to average TSA throughput, number of screened passengers, traffic has picked up every month since April. Although air traffic remains 65% lower than where it was a year ago, month-over-month improvements indicate that passengers are feeling safer about flying as airlines have implemented safety measures.

When most folks think about investing in e-commerce, big names like PayPal, Shopify, and Amazon come to mind. Yet a more general way to play this trend is through a transportation giant like UPS.

Few industrials stocks have had a better 2020 than UPS. The stock is up 35% because the company is generating record revenue and record net income thanks to surging residential deliveries and sales by small and medium-sized businesses (SMB). 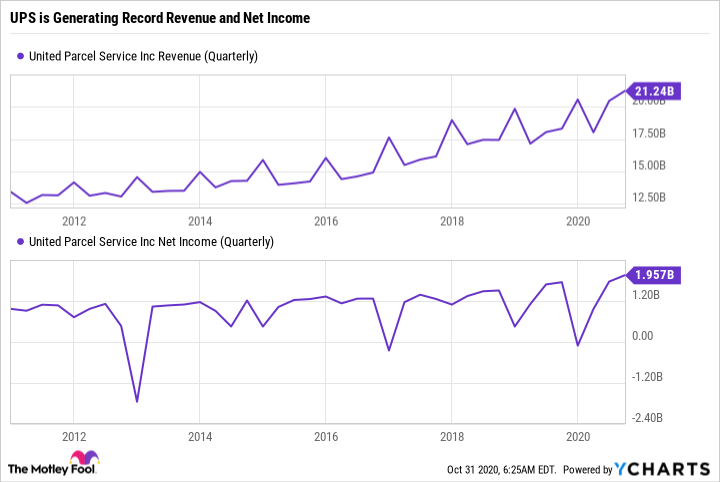 UPS' e-commerce business is thriving like never before, helping to alleviate some pressure from lower business-to-business (B2B) sales.

In its third-quarter conference call, UPS CEO Carol Tome noted that "revenue growth in our international and supply chain and freight segments was the highest quarterly growth we've seen in nearly three years," largely thanks to growth out in Asia and Europe. If UPS can retain most of its strides in SMB growth as B2B business returns to normal, and a 20% or so international operating profit margin, then the company could very well outperform the stock market after the pandemic. UPS yields 2.5% at the time of this writing.

Stock market sell-offs shouldn't be disappointing if you're a long-term investor who expects to accumulate stocks and grow your savings for several years to come. Combining the consistency of Lockheed Martin, the potential rebound in Southwest Airlines, and the growing success of UPS offers a balanced and thoughtful approach to investing in industrial stocks.