If you're looking for a company that's delivering solid growth and trading at an attractive valuation at a time when tech stocks tend to be richly valued, then you may not need to look beyond Fortinet (NASDAQ:FTNT), as it checks all of those boxes.

The cybersecurity specialist recently delivered a solid set of earnings results last week for the third quarter of 2020, but the stock dropped thanks to a broader market dip. This could be a nice opening for those investors who are on the lookout for growth stocks trading at a reasonable valuation right now. Let's see why. Fortinet currently has a trailing price-to-earnings (P/E) ratio of 41 and trades at 31 times forward earnings. The stock's trailing P/E multiple is much lower than its five-year average of over 330 and is approaching the levels seen in March this year. 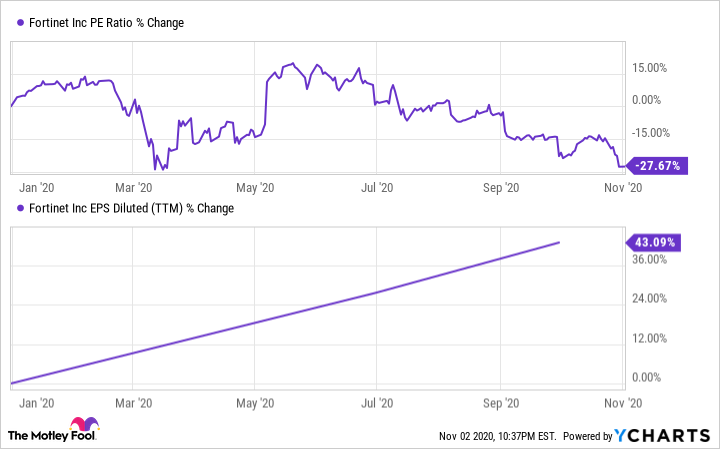 The good news is that Fortinet's earnings have been heading north over the past year, as the chart above shows. In the third quarter, Fortinet's revenue jumped 19% year over year to $651.1 million. The company's non-GAAP net income increased at a faster pace of nearly 24% over the prior-year period to $145.4 million.

Fortinet's bottom line grew at a faster pace than its top line thanks to improved margins. Its non-GAAP operating margin increased 90 basis points year-over-year to 27.4% during the quarter, driven by the faster pace of growth of its service business.

Fortinet recorded 22% year-over-year revenue growth in the service business, compared to a 14% increase in product revenue over the prior-year period. The service business generated $427.3 million in revenue, accounting for nearly two-thirds of the company's revenue. However, it only incurred $54.9 million in cost of revenue in the service segment, which was just over 39% of the company's total cost of revenue.

Signs that things are about to get better

Fortinet's fourth-quarter guidance was better than Wall Street's expectations. The company anticipates 16.5% year-over-year revenue growth at the mid-point of its guidance range of $710 million to $730 million. Additionally, Fortinet sees its gross margin increase to a range of 78% to 80%, compared to 78.1% in the prior-year period.

Its earnings are expected to land between $0.95 and $0.97 per share, compared to $0.77 per share a year ago. More importantly, Fortinet investors can expect the company to keep up its impressive pace of growth. The company's deferred revenue increased 24.4% year over year in the third quarter to $2.39 billion, exceeding the growth of its actual revenue.

Deferred revenue is the money collected in advance by a company in exchange for services that will be provided at a later date. It is recognized on the income statement once the actual delivery of services happens. So the growth in this metric indicates that more customers are signing up for Fortinet's services, or are spending more money on its offerings.

Thanks to the uptick in transaction sizes and volumes, Fortinet's deferred revenue is now almost equal to its trailing-12-month revenue of $2.46 billion. And as Fortinet goes about winning more business, investors can expect the metric to increase further and pave the way for future growth.

Another impressive thing to note about Fortinet is its solid balance sheet. The company exited the quarter with $1.77 billion in cash and investments and no debt. All of this makes Fortinet a great growth stock to buy at its current valuation, as it seems capable of regaining its mojo once again.