The U.S. Department of Justice hit Visa (NYSE:V) with an antitrust lawsuit on Thursday over the payment processor's planned acquisition of Plaid.

In January, Visa announced plans to acquire the fintech company for $5.3 billion. Plaid develops technology that helps consumers securely connect their financial accounts to their apps. The deal had been pending reviews, but last week, the Justice Department sued Visa and its consultant, Bain, to enforce Bain's compliance with its investigation of the proposed acquisition. 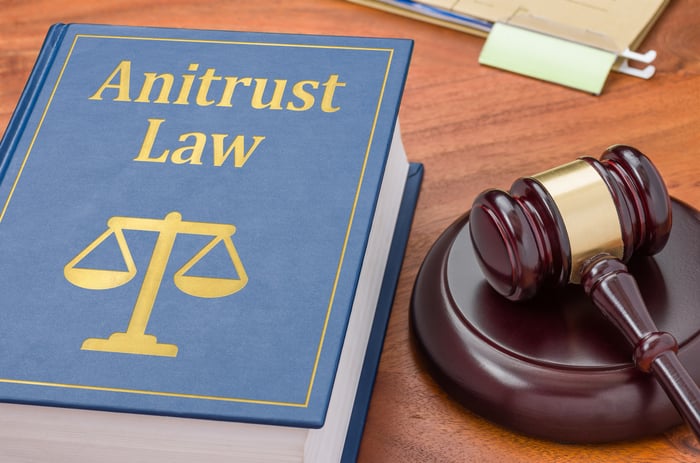 That was the precursor to the suit filed Thursday in U.S. District Court in San Francisco, which seeks to block Visa's acquisition of Plaid. The complaint, posted on Bloomberg Law, said the deal violates antitrust laws, alleging that Visa is buying Plaid to "neutralize" a threat to its debit business. The complaint said:

Visa is a monopolist in online debit transactions, extracting billions of dollars in fees annually from merchants and consumers. Plaid, a financial technology firm with access to important financial data from over 11,000 U.S. banks, is a threat to this monopoly: It has been developing an innovative new solution that would be a substitute for Visa's online debit services. By acquiring Plaid, Visa would eliminate a nascent competitive threat that would likely result in substantial savings and more innovative online debit services for merchants and consumers.

Visa issued a statement saying it "strongly disagrees" with the department's action and called the suit "legally flawed and contradicted by the facts."

Company officials said: "This action reflects a lack of understanding of Plaid's business and the highly competitive payments landscape in which Visa operates. The combination of Visa and Plaid will deliver substantial benefits for consumers seeking access to a broader range of financial-related services, and Visa intends to defend the transaction vigorously."

Visa officials said Plaid is not a payments company and that Visa faces "intense competition" from many companies:

Plaid is a data network that enables individuals to connect their financial accounts to the apps and services they use to manage their financial lives, and its capabilities complement Visa's. Together, Visa and Plaid will deliver better digital experiences and more choice for consumers in managing their money and financial data. Visa is confident that this transaction is good for consumers and good for competition.

Maybe the market liked its defense: Visa's stock was up 2% in trading on Thursday.