If you're a Vertex Pharmaceuticals (NASDAQ:VRTX) shareholder, you're surely not too happy about the stock's recent performance. The biotech giant discontinued development of VX-814, a candidate for alpha-1 antitrypsin deficiency (AATD, an inherited condition that can increase risk for lung or liver disease), and the stock sank 20% in one trading session in the middle of October.

The losses didn't end there; Vertex shares continued to slip, posting a 24% total decline for October. They are now at about the same level they reached during the March market crash. At the same time, sales and net income in the most recent quarter soared, and the company raised annual revenue guidance. It's clear that -- regardless of short-term share performance -- Vertex's growth story can fill many pages well into the future. Let's take a closer look. 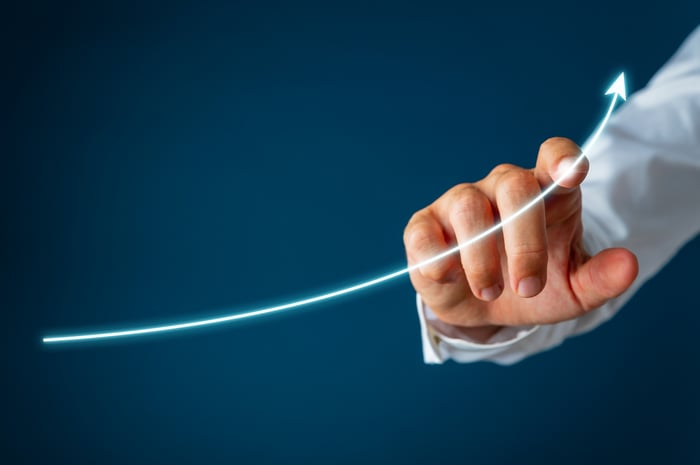 Vertex reported a 62% year-over-year increase in third-quarter product revenue, to $1.5 billion, led by cystic fibrosis (CF) drug Trikafta. The U.S. Food and Drug Administration (FDA) approved the treatment a year ago, adding to Vertex's portfolio of three other CF drugs. In the quarter, Trikafta generated $960 million.

What makes Trikafta such an exciting opportunity for the company? The FDA approved the drug for patients 12 and older who have at least one F508del genetic mutation -- that's about 90% of the CF patient population. More than 30,000 people in the U.S. -- and more than 70,000 worldwide -- are living with cystic fibrosis, according to the Cystic Fibrosis Foundation.

In August, Trikafta (under the name "Kaftrio") won marketing authorization in Europe.

While the coronavirus outbreak dealt a blow to some biotech and pharmaceutical companies, it didn't affect Vertex's product sales or earnings. Adjusted net income rose 117% to $697 million in the third quarter. The months ahead also look bright: Vertex lifted 2020 guidance for total product revenue to the range of $6 billion to $6.2 billion. That's up from the previous estimate of $5.7 billion to $5.9 billion.

And there's more growth to come. Through labeling expansions, approvals in different geographies, and reimbursement agreements, Vertex has the potential to sign on at least 20,000 new patients. The company will seek approvals in younger age groups and in patients with additional genetic mutations. Vertex is also exploring treatments for the 10% of the CF population who can't be helped by Vertex's approved medicines.

Can the strength last?

Now, you might wonder how long Trikafta can continue to dominate in CF. Based on Trikafta's patents and the drug's benefit to patients, Vertex CEO Reshma Kewalramani forecasts that Vertex's leadership in the CF market will continue until "at least" the late 2030s. Analysts are also optimistic about Vertex's market position. Morningstar predicts the cystic fibrosis portfolio will generate more than $10 billion in annual sales by 2028. Vertex holds a 46% share of the global CF drug market, according to Reports and Data research published last year. And that was prior to the Trikafta approval.

Talk of pipeline brings us back to the failed phase 2 trial of VX-814 for AATD, the genetic disorder that may lead to lung and liver disease. Many investors may be worried about Vertex's prospects beyond CF.

Here are two reasons why I'm not bothered. First, with a decade or more of CF leadership ahead, Vertex has time to develop other potential products while generating plenty of revenue. Second, Vertex's strategy involves advancing more than one candidate within a program -- knowing that some will fail. And we as investors should understand that failures are a normal part of the process. Drug discovery is risky business. Even strong companies like Vertex will face these setbacks from time to time.

I didn't buy Vertex shares for an overnight gain. I bought them for the biotech company's CF market leadership and earnings and revenue growth. And I bought them for a potential long-term gain. So I won't be selling any time soon. If you want to open a Vertex position or add to your position, you're in luck. At 26 times trailing 12-month earnings, the company is trading at its lowest valuation this year. Considering this level and Vertex's unstoppable growth, we're looking at a great buying opportunity for the long-term investor.