Marijuana stocks are once again at the top of investors' watchlists, after several catalysts recently propelled shares of a slew of industry players. First of all, sales of legalized cannabis surpassed black market revenue for the first time in Canada during Q3 2020 this summer. The growing competitiveness of legal producers means they will be able to convert consumers from an illicit market that is worth up to CA$7 billion.

Second, on Tuesday, Arizona, Montana, New Jersey, and South Dakota became the newest states to legalization recreational cannabis. Mississippi also approved the drug for medical use.  As the cannabis sector begins to boom in the U.S. and Canada, there might never have been a better time to start investing in pot stocks. Today, let's look at two top businesses to consider adding to your marijuana portfolio in case the upswing continues. 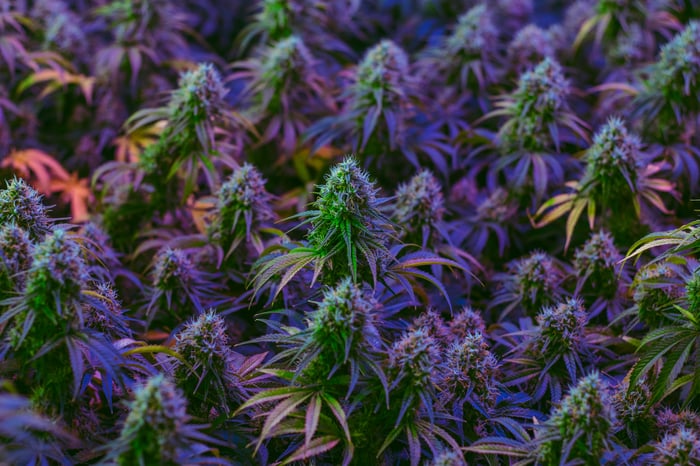 Trading at merely 3.5 times sales and 1.1 times book value, it may be surprising that to see that Aphria's (NASDAQ:APHA) valuation is at rock bottom despite being the biggest marijuana company in Canada in terms of gross revenue. The company controls 14% of Canada's cannabis market share, which is 20% more than competitor Canopy Growth Corp (NASDAQ:CGC). All combined, Aphria's recreational cannabis, medical cannabis, vape, edibles, and distribution revenue totaled CA$145.7 million during the first quarter of 2021, which ended Aug. 31,  representing an increase of 16% year over year.

Its operating income excluding non-cash items (EBITDA) also improved to CA$10 million from CA$8.6 million in the fourth quarter of 2020. With a net income of CA$5.1 million, or CA$0.02 per share, the company is getting closer to breaking even.

The biggest bullish signal for Aphria, however, comes from its market dynamics. Right now, the company is on track to sell more than 83,000 kg of cannabis per year based on its annualized Q1 2021 sales figures. That is not too far off from its production capacity of 110,000 kg per year. The discrepancy is strikingly small compared to many of Aphria's peers, who are attempting to strike the tricky balance between cannabis supply and demand.

When a marijuana company can sell as much inventory as it can produce, it does not need to take impairments to the value of its facilities nor write off goods it cannot sell due to lackluster consumer demand. If its efforts to attain profitability continue to pay off, investors might reignite their hope that Aphria will put an end to its stock dilutions. Over the past three years, the company's shares outstanding have increased by nearly 41% to 287.5 million.

Recently, however, Aphria has not tapped into its $100 million share issuance program. The company is sitting tight with close to CA$400 million in cash compared to approximately CA$140 million in long term debt and CA$270 million in convertible notes. Overall, with its strong sales growth, great valuation, and superb liquidity, Aphria is a top choice for investors looking to buy marijuana stocks at a bargain. On Nov. 5, Aphria made another exciting move in acquiring American beer producer SW Brewing Company for $300 million, putting potential synergies on the table for cannabis infused beverages as part of its expanding product offerings.

While Aphria stock is known for its cheap valuation, U.S. cannabis company Curaleaf Holdings (OTC:CURLF) has garnered investor attention for its recent triple-digit-percentage revenue growth. During the second quarter of 2020 ended June 30, Curaleaf's sales increased by a stunning 142% year over year to $117.5 million. When the company's revenue grew, thankfully, its earnings did as well. The company managed to increase its adjusted-EBITDA by more than sixfold to $28 million in the same period.

Curaleaf currently operates 93 cannabis retail shops across 23 states and distributes its products to more than 1,150 stores. The company has No. 1 market share across key states such as New York, New Jersey, Pennsylvania, and Massachusetts. Voters approved of the legalization of recreational marijuana in New Jersey on Tuesday, which might just place enough pressure on neighboring states to do the same.

At first glance, Curaleaf may seem expensive at 14.1 times sales and 7.9 times book value. However, investors are arguably getting their money's worth, considering the company more than doubled its revenue over the past year. Curaleaf is a fantastic pick for investors who are passionate about growth stocks in the marijuana industry.

Why not pick both?

Aphria is clearly the better value pick while Curaleaf is the better growth pick of this duo. However, investors who are looking for multiple stocks to choose from might consider adding both to their portfolio. That move would spread bets more safely across the two stocks and help investors stomach the ups and downs of both the U.S. and Canadian markets.