Investors may be eyeing the company's 7.7% dividend yield and reduced share price as a good way to play a recovery in the downstream sector. Let's break down the company's business to determine if things are as bad as they seem, and ultimately, if Phillips 66, trading near a five-year low, is worth buying now. 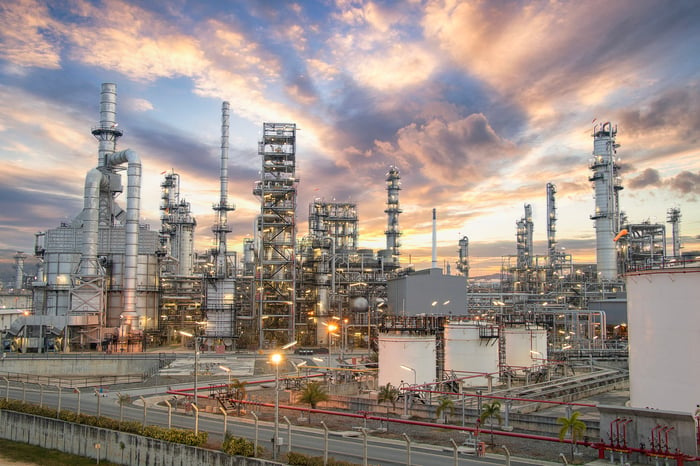 Phillips 66 had another rough quarter, losing $799 million. The loss was largely due to a $798 million impairment related to the company's Rodeo Renewed project -- the main driver behind its push toward renewable fuels. Even on an adjusted basis, the company has only earned $125 million so far this year compared to $2.97 billion for the nine months ended Sept. 30, 2019.

The good news is that three out of the company's four segments earned more profit than they did in the second quarter. The company's marketing segment is actually performing better this year than last year. Phillips 66 noted on its third-quarter conference call that U.S. marketing margins were up 40% and volumes were up 16%. International margins were up 23%. However, heavy losses in the refining business outweighed the positives from other business lines. In sum, Phillips 66 lost less money this quarter than last, but it's still struggling mightily.

Refining has gone from being the company's competitive edge to its biggest problem. The segment is struggling due to lower refining margins and lower crude utilization rates -- meaning it's generating less output relative to the total capacity of its refineries.

Although the input cost of crude oil remains low, Phillips 66 experienced even lower margins this quarter than the last quarter due to poor demand for its refined products. Because of this lower demand, Phillips 66 continues to have a lower crude utilization rate than normal. It finished the quarter with a crude utilization rate of 77%, a slight improvement from last quarter but a far cry from an average of 94% in 2019.

It's now highly unlikely the company's refining segment will be profitable for the year considering margin per barrel was worse in the third quarter than the second quarter and utilization rates are showing no signs of improvement.

A stable and high-yielding dividend

A reduced share price has ballooned Phillips 66's dividend yield, which is now an impressive 7.7%. Earlier this year, the company announced it would be suspending dividend raises, but income investors can take comfort in the fact that the dividend still remains a priority for the company. 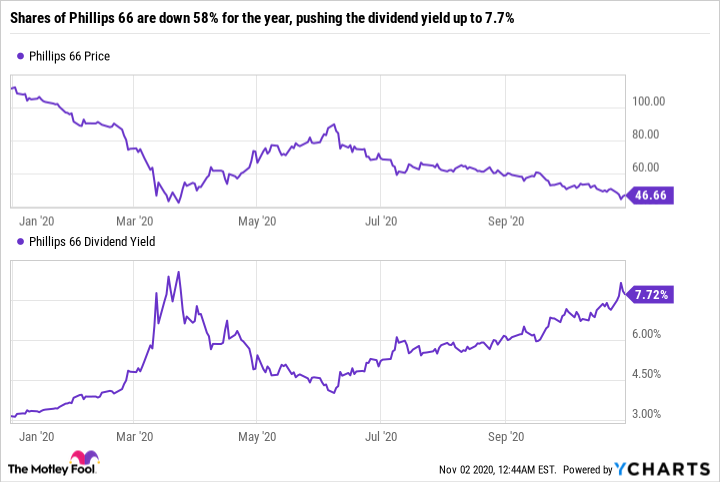 Management noted that Phillips 66 increased its liquidity and cut spending in an effort to defend the dividend. Thanks to lower costs, the company was able to cover over half of its third-quarter dividend obligation with cash flow from operations, excluding working capital. After depleting its cash position by about $400 million in the quarter, Phillips 66 still has $1.5 billion in cash to cover shortfalls in cash flow from operations in the coming quarters.Considering the challenges the company is facing -- and that Philips 66 yields significantly more than the market average -- it's probably best that the company plays it safe by preserving its existing dividend instead of straining its balance sheet further by raising the dividend.

Despite decent results from its other business lines, Phillips 66's refining business is showing no signs of improvement. The company continues to lose money as its refining margins are now just a fraction of where they were in 2019. However, the company's dividend obligation and capital expenditures can continue to be supported by cash flow from operations and cash on the balance sheet, meaning the company shouldn't need to take on more debt.

Management is also committed to preserving the dividend. Phillips 66 has a lot of problems, but its stock is also trading at bargain prices compared to the beginning of the year. Given the strength of the dividend and the reduced stock price, Phillips 66 looks to be a good value right now. Income investors could do well to buy a little bit of the stock now and then add to the position if refining margins and crude utilization rates improve.