In conjunction with its third-quarter financial results, Virgin Galactic (NYSE:SPCE) confirmed plans on Thursday for its first suborbital test flight later this month. The space tourism company said it is completing the final steps for the VSS Unity's rocket-powered test flight from Spaceport America.

CEO Michael Colglazier said: "This will be the first-ever human spaceflight conducted from New Mexico," with a follow-up planned for the first quarter of 2021. The company is continuing plans for its first commercial launch, with plans to reopen ticket sales after founder Richard Branson's flight sometime in 2021." 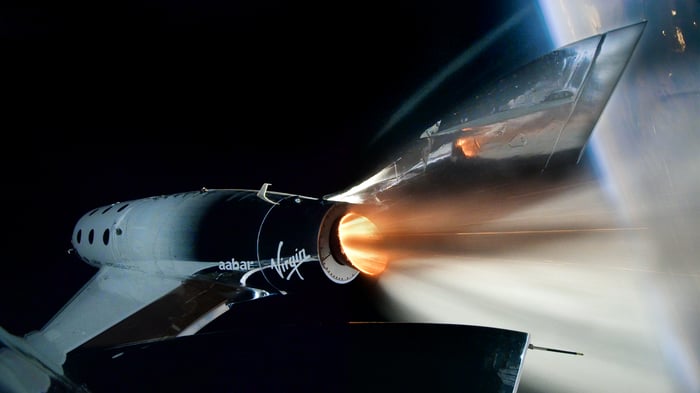 Space tourism is expected to be enormously popular with the jet set, and Virgin Galactic is planning as many as 400 space flights per year from each spaceport, according to Colglazier, which could bring in as much as $1 billion per year in annual revenue.

"The next chapter of Virgin Galactic is to use this system to bring thousands and thousands of people to space and deliver our purpose of opening space to change the world for good. To reach this objective, we are embarking on a multi-year effort that will lead to flights not once a month, or even once a week -- but targets flying 400 flights per year per spaceport."

This lofty goal is still years away, as Virgin Galactic has thus far completed just two test flights, the first in December 2018, and the second in February 2019. The company has two additional trips planned to complete the necessary testing of its SpaceShipTwo spacecraft system before Branson's maiden flight.

UBS analyst Myles Walton estimated that 400 flights per year and $1 billion in annual revenue would imply a ticket price of about $400,000. Previous reservation pre-sales have cost between $200,000 and $250,000 per ticket, but Virgin Galactic has yet to disclose what the ticket price will be once sales resume.