Energy stocks have had a rough 2020 as the oil and gas downturn continues. Although most companies are struggling, Phillips 66 (NYSE:PSX) and Kinder Morgan (NYSE:KMI)appear to have fallen more than these quality businesses should. 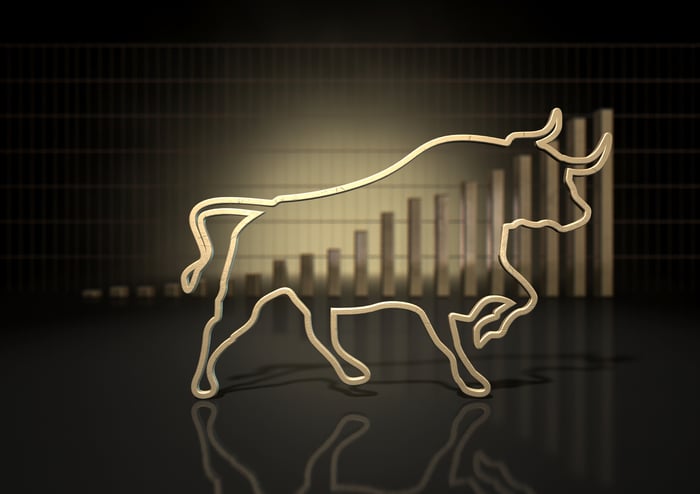 Shares of Phillips 66 have been clobbered this year, plunging 57% as one of America's largest independent refining and marketing companies continues to struggle.

Like other major refining and marketing companies, Phillips 66 has taken on debt to bolster liquidity. However, it has retained its investment-grade ratings -- A3 from Moody's and BBB+ at Standard & Poor's.

During the most recent earnings call, Phillips 66's CFO mentioned that its goal is to get its debt-to-capital (D/C) ratio back down to 30%. It finished 2019 with a D/C ratio of 32.1%, and currently has its highest debt to capital, financial debt to equity, and net debt position in its history. 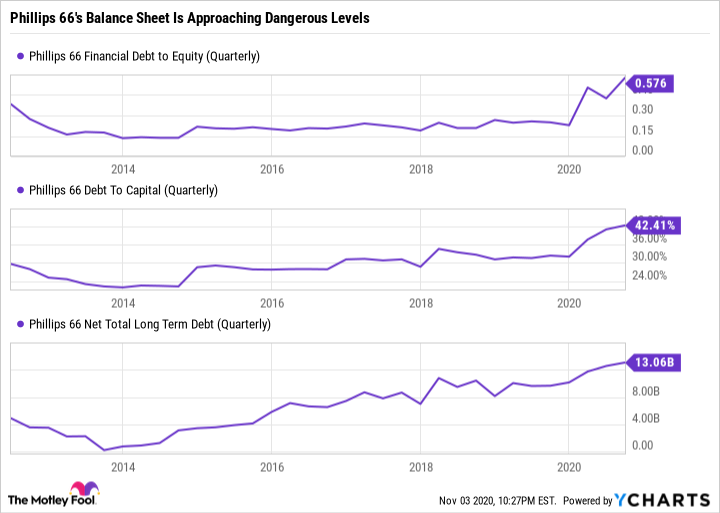 Generally speaking, the lower the D/C ratio, the healthier the financial structure. Oil and gas companies are notorious for overusing debt, which at its extreme can lead to insolvency. Since spinning off from ConocoPhillips in 2012, Phillips 66 has utilized debt to buy back shares, particularly in 2018 when its stock price was much higher. Although the company's cash flow from operating activities has consistently exceeded capital expenditures and dividend obligations, the company's debt has continued to rise, increasing itsD/C ratio. It will be important to see if Phillips 66 can navigate the rest of the oil downturn without taking on too much more debt and then work toward reversing the trend and get its balance sheet back to a healthier level.

In the meantime, the company has and expects to continue generating close to enough operating cash flow to cover its dividend and capital expenditures. Although Phillips 66 suspended dividend raises earlier this year, management made it clear that it is committed to sustaining the current payout, which yields a hearty 7.7% at the time of this writing.

Shares of SolarEdge, a leader in power optimizers and solar panel power inverters for the commercial and residential solar industry, fell over 22% on Tuesday after the company reported weak third-quarter earnings and disappointing Q4 guidance.

Even with the sell-off, SolarEdge's stock has more than doubled this year, and that's after a monster 170% gain in 2019. 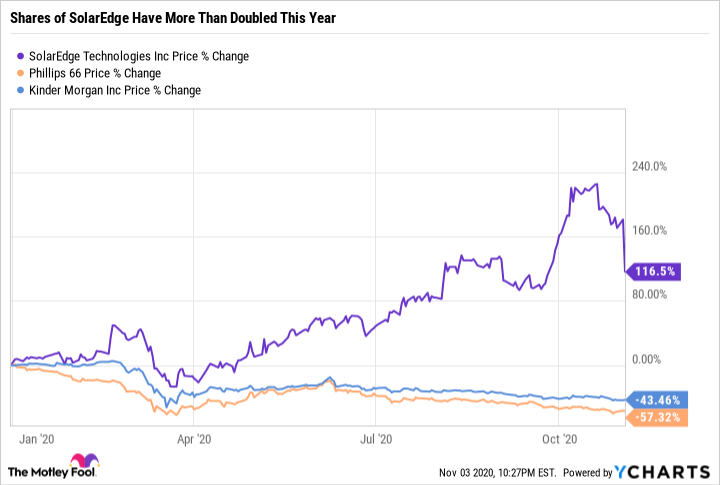 Although the overall results weren't pretty, SolarEdge reported record solar revenue in Europe and expects North American residential revenue, one of its highest-margin segments, to be 50% higher in the fourth quarter than in Q3.

Most importantly, the company has a treasure trove of $1.2 billion in cash and a net cash position of $554 million. SolarEdge entered the year sporting the best balance sheet in the industry and has since grown its cash position despite increasing spending. 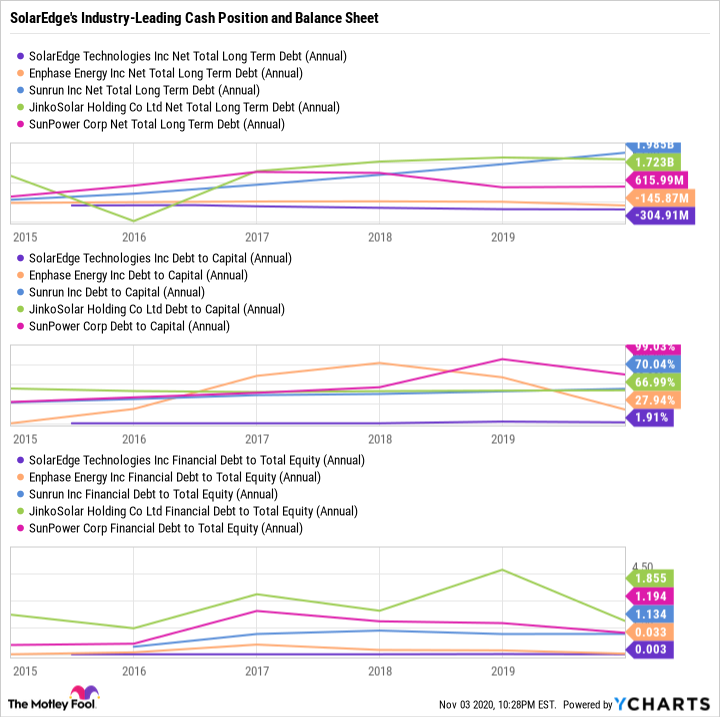 Due to SolarEdge's expensive valuation and poor results, shares of the company could be volatile over the next couple of quarters. The risk seems worth it to pick up an established solar stock at a discount.

For much of the oil and gas industry, 2020 has been the year of dividend cuts. ExxonMobil failed to raise its dividend for the first time in 38 years. Other majors like Royal Dutch Shell, BP, and Equinor have cut their dividends by over 50%. As far as pipeline companies go, Energy Transfer just sliced its distribution in half. Oil services leaders Schlumberger and Halliburton each cut their dividends by 75%, and several exploration and production (E&P) companies like Occidental Petroleum and Apache have essentially eliminated their dividends. 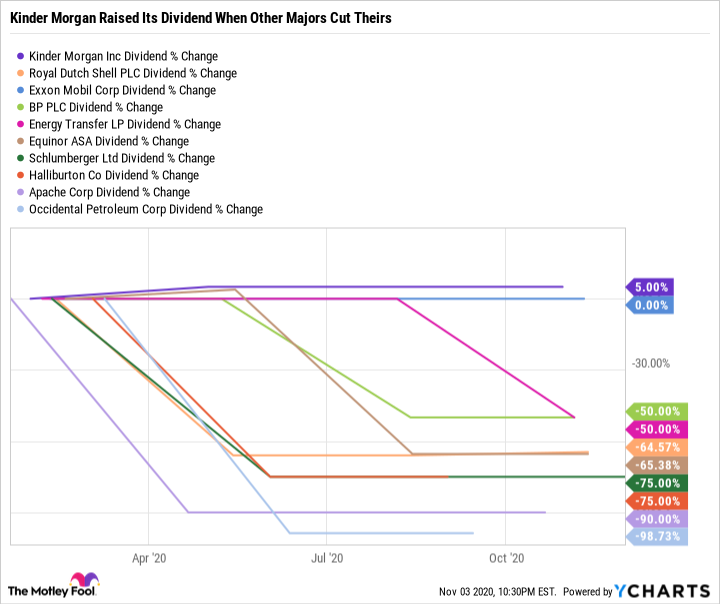 Not only is natural gas pipeline giant Kinder Morgan not cutting its dividend, it actually raised it by 5% this year. Better yet, the company's predictable fee-based pricing model is insulating its earnings from much of the downturn. According to Kinder Morgan's third-quarter earnings report, the company expects only minor decreases in earnings for the year, but its distributable cash flow is on track to be double its dividend distribution -- meaning that Kinder Morgan can pay its dividend with cash, not debt. The company's strong results, reduced stock price, and 8.8% dividend yield make it an attractive dividend stock to buy right now.

Energy has been the worst-performing sector so far this year, but that doesn't mean that all energy stocks are bad. Down over 50%, shares of Phillips 66 could be a good value now. SolarEdge has been one of the premier growth stories over the past few years, a trend that could continue if the company can improve its commercial business in the coming quarters. Kinder Morgan's dividend appears to be one of the most stable in the sector, and its 8.8% yield is more than most investors expect to earn in the stock market in a given year. Each company represents a different way to invest in the energy sector, but all look to be good buys here.