Shares of movie theater operator AMC Entertainment (NYSE:AMC) rose as much as 76% at the open of the trading day on Monday, Nov. 9. Following close behind was Cinemark Holdings (NYSE:CNK), with a gain of nearly 70% out of the gate. National CineMedia (NASDAQ:NCMI) was a relative laggard, posting a jump of only 45% in the first few minutes of trading.

None of these early advances held, however, which probably isn't surprising given the massive increases they represented. That said, the stocks hardly fell back down to Earth. By roughly 10:30 a.m. EST, AMC Entertainment was still up 47%, Cinemark was up 39%, and CineMedia rose 34%. The big news was clearly the positive update on a potential COVID-19 vaccine out of Pfizer and partner BioNTech. 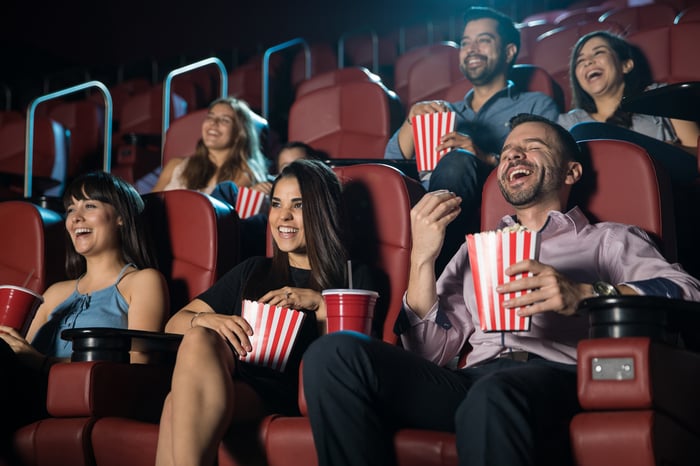 Early on in the pandemic, when governments around the world were using forced business closures to slow the spread of the pandemic, movies were deemed non-essential. That makes complete sense, given that seeing a movie in a crowded theater was not considered essential. However, there are other complicating factors here that deserve mention.

Sitting in close proximity to other people for long periods of time appears to increase the likelihood of transmitting the illness. So the very nature of the movie theater business is problematic when it comes to COVID-19. That's why many states, like New York and California, were slow to allow theaters to reopen. But even reopened theaters are operating at reduced capacity (which means lower revenue) and with enhanced cleaning efforts (which increases operating costs). Worse, many movie companies are delaying releases or shifting them to streaming platforms, which means there's not much to lure consumers back to the movies.

So ultimately, the vaccine news is great for AMC, Cinemark, and National CineMedia. It could very well allow the movie chains to welcome back customers at pre-COVID-19 levels and entice moviemakers to start releasing new movies again. But that view of things looks a bit overly positive right now. That's not to suggest that a vaccine won't improve the situation, only that there's no vaccine yet, and it will take time to roll out. So the return to "normal" will likely be an extended affair. The stock gains today are likely more about stock traders pricing in more good news than is really likely in the days and months ahead. 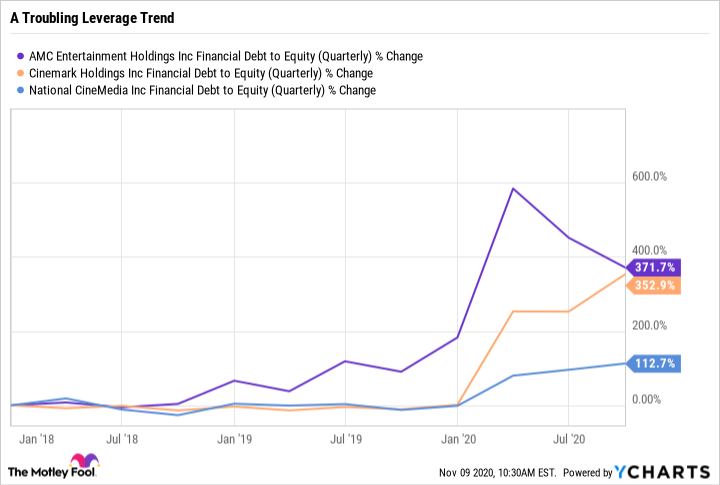 That brings into focus another big problem this trio faces: debt. AMC recently filed a report with the SEC showing that it could run short of cash before the end of 2020 or in early 2021. A company wouldn't make that statement unless things were really bad. And all three chains reported significant losses in the third quarter, which materially increases the risks of leverage. The financial debt-to-equity ratio for National CineMedia, for example, has more than doubled so far in 2020, with over 350% debt increases at both AMC and Cinemark. Clearly there are very big financial problems facing these movie chains right now as they try to muddle through the impacts of the pandemic.

But getting customers back into theaters is going to be a process, and it will likely take months (if not longer) to achieve. First, a vaccine has to be both effective and widely available. Meanwhile, government regulators have to allow movie chains to reopen without restrictions. And, still vital in the equation, consumers have to be convinced that going to a movie is both safe and worthwhile, given the increasing use of streaming services. No wonder the stocks cooled off after the swift, enthusiasm-driven advance.

One trading day will not change much in the business background at AMC, Cinemark, or National CineMedia. And there are still a lot of things that need to go right from here for them to turn their businesses around -- including a vaccine actually getting government approval for widespread use. And with so much up in the air, and all three of the companies dealing with the leverage they've taken on, long-term investors should probably tread with caution here. In fact, it might even be advisable to wait for actual proof that the underlying businesses here are improving before jumping aboard.