Shares of Taubman Centers (NYSE:TCO) surged earlier this year after the mall owner announced a deal to sell all of its publicly traded stock to Simon Property Group (NYSE:SPG) at a big premium. However, since March, the COVID-19 pandemic has decimated the mall sector, leading Simon to attempt to cancel the deal. The two sides are now embroiled in litigation about whether Simon Property Group has the right to back out. A trial might begin as soon as next week.

In this context, Taubman's weak third-quarter earnings report released Monday afternoon was awful news for the mall REIT's shareholders. The poor results highlight how far Taubman stock might plunge if the buyout deal falls through and increase the risk that Simon will prevail.

The sharp drop in NOI caused adjusted funds from operations (FFO) to plummet to $0.41 per share, down from $0.94 per share a year earlier. The Q2 2019 result did include a $0.05 one-time benefit from a business-interruption insurance claim, but the year-over-year drop in adjusted FFO was still quite severe. 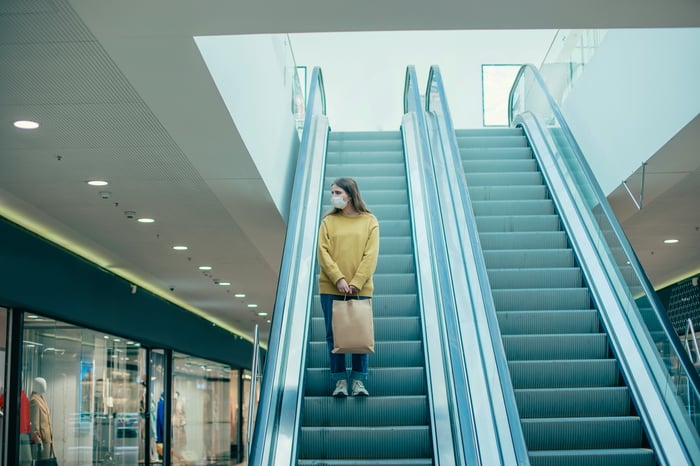 Adjusted FFO per share only fell 30% year over year in Q3, from $0.86 to $0.60. However, Taubman benefited from a big jump in lease termination revenue, which totaled $19.3 million last quarter and boosted adjusted FFO per share by $0.22. The underlying FFO trend was consistent with the prior quarter. Furthermore, the high number of lease terminations will lead to lower rental income in future quarters. Indeed, leased occupancy for Taubman's U.S. malls fell to 91.1% at the end of Q3 from 94.7% a year ago.

The COVID-19 pandemic has hurt all mall REITs, but it hasn't hurt them all equally. Simon Property Group also released its third-quarter results on Monday afternoon, and it reported a 24.4% decline in comparable NOI and a 22.4% drop in total NOI, along with a 33% decline in FFO.

Given that Taubman somewhat arbitrarily excludes several of its worst-performing malls from its comparable property base, the total NOI figures are a better comparison marker. By that metric, Taubman's NOI decline was more than 10 percentage points worse than Simon's.

That will make it harder for Taubman to win in court. One of Simon's primary legal arguments is that Taubman has been disproportionately hurt by the COVID-19 pandemic, which would be grounds for termination. Five months ago, it wasn't obvious that Taubman would suffer more than other mall owners; today, Simon's legal claim seems far more plausible.

To be fair, Macerich -- another high-end mall owner -- reported a nearly 30% NOI decline (excluding lease termination income) for the third quarter. Still, that was nearly 5 percentage points better than Taubman's result. Moreover, Macerich was particularly hard-hit by long-running mall closures in New York and California, as it gets half of its NOI from those two states.

Too much risk for the potential reward

Taubman Centers stock closed at $36.02 on Monday after coronavirus vaccine hopes spurred a big rally. The $52.50 per share that Simon offered back in February represents a 46% premium to that price. 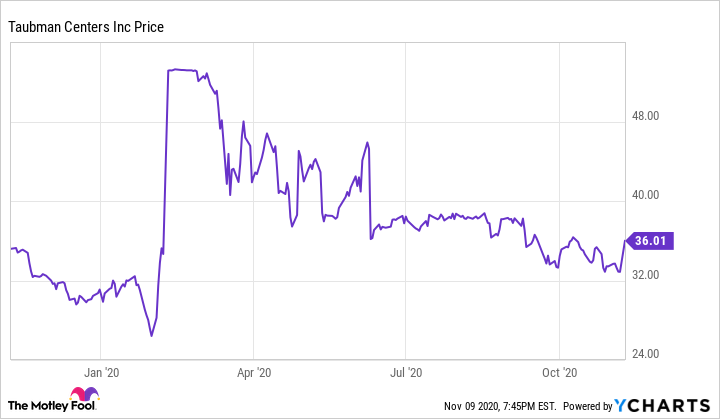 However, investors shouldn't be tempted by that potential windfall. There's a significant risk that Simon could prevail in court, or that the two sides will negotiate a settlement (potentially including a breakup fee) to avoid the uncertainty and cost of going to trial. Taubman's weak Q3 earnings report increases these risks by weakening its legal case.

If the Simon deal is terminated, Taubman stock would have a long way to fall, even if it received a meaningful breakup fee. After all, Taubman shares have increased slightly over the past year, whereas Macerich stock has lost two-thirds of its value due to the dual threats of the pandemic and the so-called retail apocalypse. Investors looking to bet on a retail recovery can find far better investment opportunities than Taubman Centers.