Airline stocks soared higher on Monday on news of a big development in the race for a COVID-19 vaccine, but the stocks were split between modest winners and a handful of losers on Tuesday.

It was the airlines under pressure that were covering the most ground, with shares of Hawaiian Holdings (NASDAQ:HA) down 9% as of 2:15 p.m. EST, shares of Spirit Airlines (NYSE:SAVE) off by 6%, and American Airlines Group (NASDAQ:AAL) down 4.5%.

The airline sector has been devastated by the pandemic, and it's hard to come up with a bull case for the stocks absent a vaccine and a return to normalcy. So, it made sense for the stocks to soar higher on the positive developments out of Pfizer released Monday. 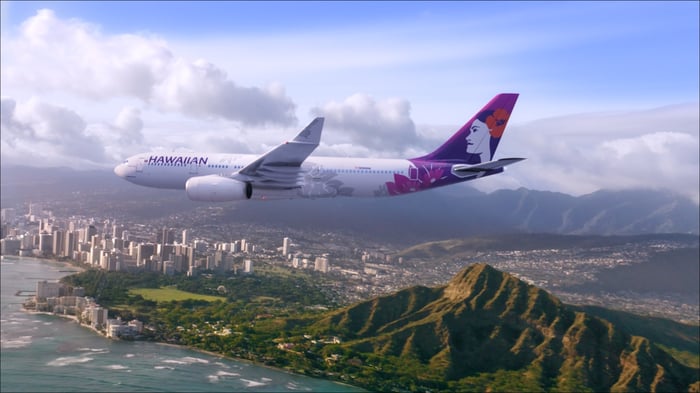 Hawaiian was the biggest winner on Monday, with its shares up more than 50% for the day, and that jump caused Deutsche Bank analyst Michael Linenberg on Tuesday to downgrade the shares to hold from buy. Linenberg in a note called the vaccine good news, but said Hawaiian shares after the run up have now priced in most of the good news.

Shares of American, meanwhile, are likely under pressure after the airline on Tuesday morning filed to raise $500 million in a secondary offering. While the cash is much-needed with the airline burning through $44 million per day in the third quarter, and expecting to burn through upwards of $30 million per day in the fourth, the 38.5 million shares to be issued will dilute current holders and secondary offerings often cause the share price to decline.

There's no company-specific news on Spirit today, but the airline is smaller and the shares more volatile than most. Given the higher risk-reward ratio that comes with a smaller airline, there are likely short-term holders looking to book gains after yesterday's jump higher.

I said yesterday investors should be cautious about getting overly excited, given the tough journey these companies still face. At best the vaccine could be widespread enough for summer vacation travel to return in 2021, but even in the best-case scenario it will likely be 2024 before more lucrative business and international travel fully return.

Of the three airlines falling today, Spirit is the one most worthy of adding to a watch list. Thanks to its industry-low costs, the airline is well positioned to win fare wars that often mark the beginning of a travel turnaround, and assuming it makes it to next summer should be among the early winners in a leisure-driven recovery.

Hawaiian has some inherent disadvantages given its reliance on international vacationers from Asia, a segment of the market not likely to return quickly. And domestic rivals including United Airlines Holdings (NASDAQ:UAL) and Southwest Airlines (NYSE:LUV) appear to be targeting travel between the U.S. West Coast and Hawaii as vacation demand returns, which could make Hawaiian's core routes even more competitive.

American has enough cash to make it through the crisis, thanks in part to the secondary offering announced today, but the airline also has an industry-high debt load that will weigh heavily on it even after the recovery begins to accelerate.

Even with the vaccine news, airlines remain high-risk, volatile stocks. Investors should expect more turbulence in the weeks and months to come.