Apparel sales came swinging back in September after precipitous drops for months at the beginning of the pandemic. The retail-sales plunge wiped out iconic brands like Brooks Brothers and Neiman Marcus, both of which filed for Chapter 11 bankruptcy protection.

But as stores reopened and customers were anxious to get back to spending on clothing, apparel sales in September climbed 11% over August spending. Gap (NYSE:GPS) and Nordstrom (NYSE:JWN) both report quarterly results this month, and they need to see critical improvement.

The  largest company in apparel retail, with $16 billion in annual sales, Gap lost its touch as fashions changed and its styles didn't keep up. Even its reliable Old Navy brand began to feel less relevant; during the worst months of the pandemic, the company's finances were in a precarious situation. 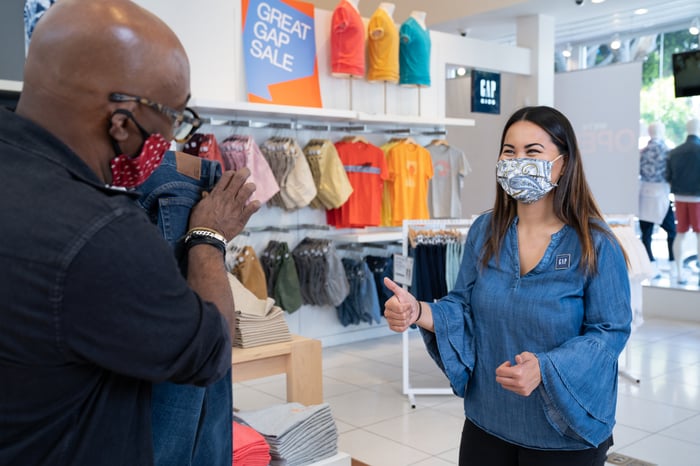 But after CEO Sonia Syngal announced that the retail chain would not pay rent on some of its stores, sales began to even out. Gap has been a leader in digital shopping, and its broad array of omnichannel shopping options -- including store pickup and free delivery -- gave it a leg up while customers stayed home. Its focus on basics and activewear were also a hit in the new COVID-19 era. The Athleta women's activewear brand has been its only growing brand for several seasons as athleisure has become an important trend, and sales rose 6% in the second quarter despite an 18% decline in sales for the company as a whole.

Syngal and her teams announced their three-year "Power Plan 2023" in October to reach 80% of its addressable market through the company's diversified omnichannel program. It intends to grow Old Navy to a $10 billion brand, reinvent Banana Republic, double Athleta sales, and "transform Gap" by employing a variety of measures:

Having lost its identity over the years, Gap has been trying to figure out a way forward for the Gap brand. It plans to reduce North American stores by 35% and have 80% of remaining stores in off-mall locations. Management seems to feel that success during the pandemic means that the brand is once again relevant -- "right product, right time" --and is going forward with technical changes instead of revamping the actual brand.I think that's ignoring the problem, but we'll find out soon enough.

While we won't see the impact of the plan immediately, investors should watch for general improvement in the third quarter.

Nordstrom is one of the country's most-valued department stores thanks to its focus on customer service and its wide range of quality fashions. But while it may have outperformed other department stores chains over the past few years, it was still battered by COVID-19. 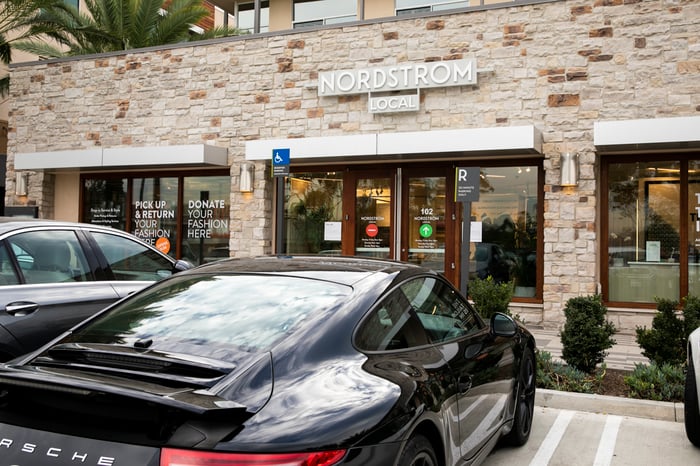 Sales fell 53% in the second quarter ended July 30, and there was a $1.62 loss per share. Nordstrom's expensive collection wasn't important while people stayed home, and stocked on food and basics. And customers have been leaning toward small, boutique-style shops at the expense of large department stores. Nordstrom had been a leader in omnichannel shopping over the past few years, but even digital didn't do well in the second quarter, declining 5%.

That said management is still optimistic. Nordstrom ended the second quarter with $1.3 billion in cash, and it launched several initiatives over the past few months to stay competitive and improve its position. This is how it's going about a strategic recovery:

Nordstrom stock tumbled in March and hasn't recovered. It's now down almost 70% year to date. Any stock movement will hinge on how well sales have recovered since stores have reopened, but even an improvement won't erase large declines.

With the retail sales jump in September, and consumers out to spend money again, Nordstrom should be the recipient of some of that spending. But it will still have miles to go to get back to high growth, as the pandemic highlighted some of the issues of department stores in general--too big stores with too little atmosphere. The company will release results on Nov. 24.