Are you looking for work? If so, it's probably best not to consider the airline industry. According to Airlines for America, a major trade group in the sector, in the fourth quarter of this year, employee rolls at U.S. carriers will drop to roughly 370,000 people. This is a steep drop from the approximately 460,000 in March, and would represent numbers that haven't been as low since the mid-1980s.

The culprit, of course, is the coronavirus pandemic. Although Airlines for America eagerly disseminates research indicating that it's generally safe to fly under such conditions, many would-be travelers continue to avoid the activity. 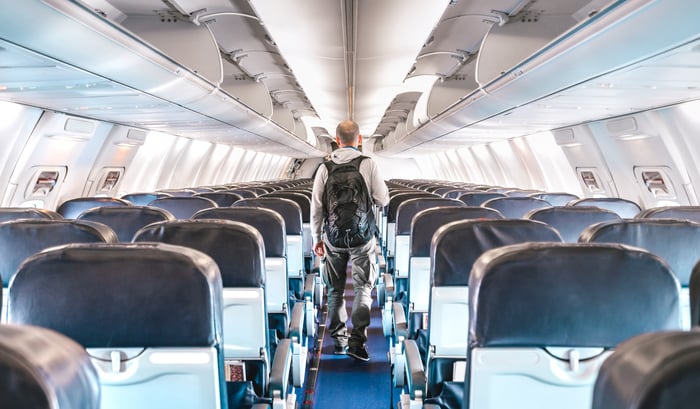 One major concern is the prospect of being confined in the tight space of a plane for several hours with potentially coronavirus-carrying strangers; another is the risk of infection in an unfamiliar environment at the destination.

While some demand is returning to the industry, it's still well down from 2019 levels. In an article published Thursday on the apparent upcoming slump in employment, CNBC quoted Transportation Security Administration figures showing a 65% decline in the number of passengers screened at U.S. airports. According to Airlines for America's forecast, the typically robust Thanksgiving holiday will provide only a temporary bump in activity.

Meanwhile, CNBC cited a statement from Southwest Airlines (NYSE:LUV), a popular carrier before the pandemic hit, predicting that any rebound in revenue would likely recede for the rest of this year. Southwest added, though, that it was unclear whether this is due to the recent surge in COVID-19 cases throughout the country.

Airline investors seem to be feeling this gloom. Southwest's stock, for one, was down by 3% on Thursday, exceeding the decline of the S&P 500 index.