Walt Disney (NYSE:DIS) was a stock on the rise in post-market trading on Thursday, following the after-hours release of its fourth quarter of fiscal 2020 results.

For the quarter, the entertainment giant suffered a 23% drop in revenue, to $14.7 billion. The bottom line plunged violently into the red, with a loss from continuing operations of $710 million against the year-ago profit of $777 million. When adjusted for certain items, the former shook out to a $0.20 per share deficit. 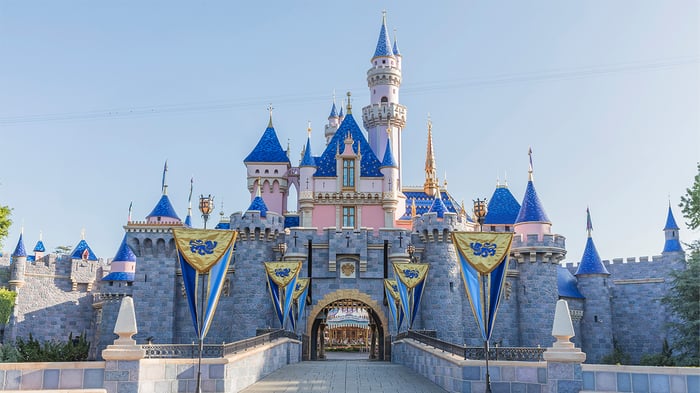 Analysts were expecting far worse from Disney, however. On average, they forecast only $14.2 billion on the top line, and a much deeper per-share, adjusted net loss of $0.71.

What helped lift the company was the Disney+ video streaming service, which has grown its paid subscriber count to 73.7 million. This means the service -- launched only last year -- continues to grow robustly, as that number was over 60.5 million in early August.

As a result, Disney's direct-to-consumer and international segment -- under which Disney+ falls -- enjoyed 41% growth in revenue, to $4.85 billion for the quarter. That was the best of the four segments. Media networks was the only other one reporting a gain (11%, to $7.21 billion).

Meanwhile parks, experiences, and products, and studio entertainment (i.e., films) -- both badly wounded by the coronavirus pandemic -- fell precipitously, by a respective 61% and 52%.

Disney's struggles prompted the company to suspend its semi-annual dividend. The company said this is being done "in light of the ongoing impact of COVID-19 and the Company's decision to prioritize investment in its direct-to-consumer initiatives."

But investors seem to be finding comfort in the better-than-expected results and the Disney+ figures. In after-market action on Thursday, the stock was up by over 3%.