During the coronavirus pandemic, the financial sector has been one of the worst performing parts of the stock market, down by about 12% year to date versus an 11% gain in the S&P 500. And there are good reasons for this: Investors are worried about what elevated unemployment and low interest rates could mean to banks' bottom lines.

Wells Fargo (NYSE:WFC) has been one of the major laggards in this beaten-down sector, dramatically underperforming its big-bank peers. Because it doesn't have a substantial investment-banking business to help offset consumer banking losses (investment banking tends to do better in turbulent markets), Wells Fargo is more susceptible to the effects of the pandemic than the other big banks.

And remember: This comes on the heels of several years of underperformance before the pandemic, as Wells Fargo's numerous scandals have tarnished its reputation and caused many investors to abandon the stock.

In fact, Wells Fargo stock is down by 55% in 2020, and over the past five years has underperformed the financial sector by a staggering 93 percentage points. Shares now trade for just 63% of their book, a valuation only seen very briefly during the financial crisis. Could now finally be the right time to buy Wells Fargo? 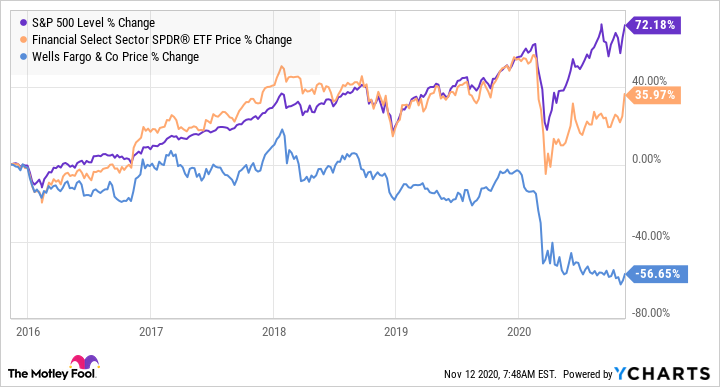 As I mentioned, Wells Fargo is a stock that is cheap for a reason. Prior to the pandemic, it was plagued by several high-profile scandals. First, it was revealed in September 2016 that employees fraudulently opened millions of accounts under customers' names in order to meet sales targets. Separately in 2017, the bank said that 570,000 customers may have been improperly charged for auto insurance.

And there were several others. Wells ended up paying some hefty fines, was prohibited from growing by the Federal Reserve, and had serious damage done to its reputation.

During the pandemic, the underperformance is more of a function of how Wells Fargo's business is set up. When markets are turbulent, mergers and acquisitions, trading, equity and debt underwriting, and other investment-banking activities tend to be very strong. Wells doesn't really do any of that to a large extent. So the bank has an expected wave of loan defaults and record low interest rates weighing on its profitability, with few investment-banking activities to offset it.

This bank isn't going away

On the other hand, it's not all bad news. For one thing, it's important to realize that Wells Fargo is still quite profitable. Net charge-offs ticked up in the third quarter, but the bank still produced earnings of $0.42 per share.

Second, Wells Fargo has a long history of responsible lending and strong credit quality in its lending operations. It is this disciplined lending that allowed it to make it through the financial crisis largely unscathed and to pick up rival Wachovia for a fire-sale price.

Wells Fargo's annualized net charge-off ratio ticked up by two basis points to 0.29% in the third quarter, but compare this to 0.82% for Bank of America's (NYSE:BAC) consumer banking division and just under 1% for JPMorgan Chase (NYSE:JPM).

Third, Wells Fargo's new CEO, Charlie Scharf, is prioritizing expense reductions, an area that has been sadly neglected by the bank in recent history. Scharf plans to cut $10 billion in annual expenses, and if successful, this could be a big boost to profitability.

Expect some volatility, but...

The bottom line is that Wells Fargo's stock has been beaten down for a reason, but at the end of the day, this is an institution with a long track record of responsible lending, and it is still quite profitable. And since it's essentially a pure savings and loan, unlike the rest of the big banks, it stands to benefit more than most when the economy returns to normalcy.

With a new CEO who is just getting started on the path to expense controls, now could be a smart time for patient long-term investors to take a closer look at Wells Fargo. In full disclosure, I recently added it to my own stock portfolio, and although I expect quite a roller coaster ride as the effects of the pandemic play out, I'm optimistic that the bank can turn things around.