Investors have understandably bid up shares of companies that deliver software as a service this year as those companies continue to benefit from a work-from-home world. For an example, we need only to look at the initial public offering of cloud-based data and analytics company Snowflake (NYSE:SNOW) -- its shares more than doubled on its first day of trading in September.

But there are other industries where growth is just as impressive -- and it's predicted to last for decades. For instance, of the 463 million people with diabetes worldwide, only 25% are receiving care for the disease. A 2017 study from the U.S. Centers for Disease Control and Prevention showed the annual cost of healthcare for the 30 million Americans with diabetes had grown to almost $17,000 per person, a 43% increase from a decade earlier. Reducing these costs requires patients to better manage the disease and make changes to their lifestyle -- an effort that has been aided by the introduction of continuous glucose monitoring (CGM) in the past two decades.

In 2004, Medtronic (NYSE:MDT) introduced a real-time monitoring system that could alert patients to dangerous blood glucose levels. DexCom (NASDAQ:DXCM) and Abbott (NYSE:ABT) introduced versions in 2006 and 2008, respectively. Although each company has innovated, DexCom's technological advances have stood out, driving consistently high sales growth and facilitating each aspect of managing diabetes: drugs, drug delivery, analytics, and care. 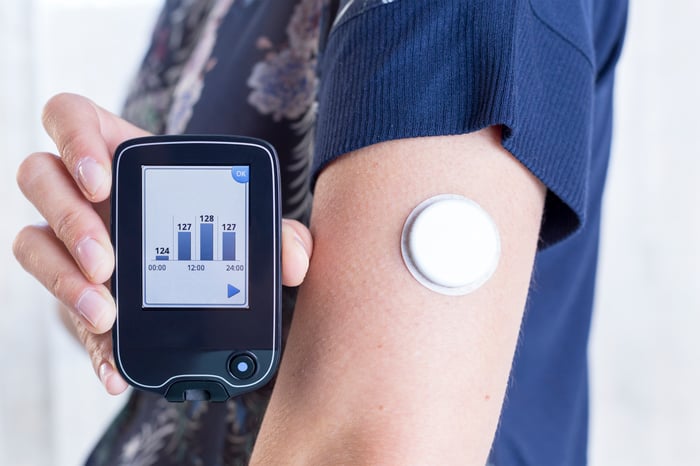 Selling a lot, pocketing even more

With so many people with diabetes across the globe, so few receiving treatment, and the increasing costs of managing the disease, the market for CGM devices is red-hot. The global diabetes management market is estimated at $6.3 billion, and it's expected to grow by 19% annually through 2026.

DexCom's trailing-12-month sales of $1.8 billion have continued to grow despite the pandemic's disruption of the healthcare system. Third-quarter growth for DexCom was 26% higher than the same period in 2019. That is less than the 44% revenue growth for all of 2019, but still impressive. And revenue growth is something DexCom investors have gotten used to: 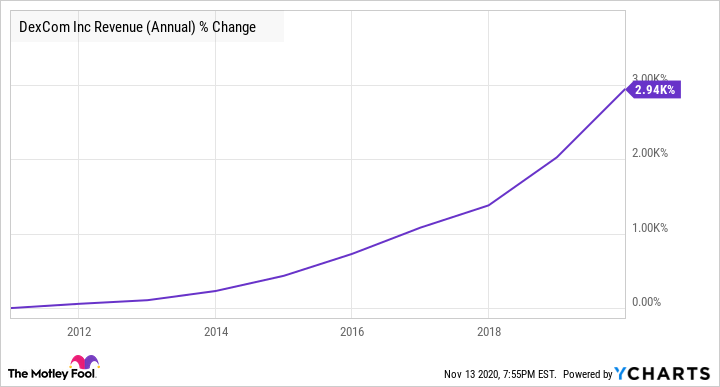 Not only is revenue growing at a healthy clip, but cash flow is following. In fact, as revenue grows, more of the sales are making it to the bottom line. Free cash flow as a percent of sales grew 50% in 2018, 67% in 2019, and is on pace to grow another 59% this year. Free cash flow for the past 12 months now stands at $264 million.

In September, competitor Abbott Labs introduced its Freestyle Libre 3 device, touting it as the smallest sensor available. It is widely considered more affordable than DexCom's option, but analysts think the market is so underpenetrated that both companies will continue to realize plenty of growth. Furthermore, in June, Abbott's Libre 2 device received a designation in the U.S. allowing it to be paired with devices such as an insulin pump. As an indication of DexCom's advanced technology, its device has had this designation since 2018.

DexCom's next technological leap is a joint project with Alphabet's Verily. The DexCom G7 monitor is expected to launch in several markets in the second half of 2021 after being delayed due to the coronavirus pandemic. Management expects it will be rolled out to all core markets by 2022; the company wants to be sure it can produce enough new monitors to transition all patients from the previous version of the device before introducing the updated version.

The lack of a next-gen device doesn't mean the company is on hold. Last month, management announced a partnership with Eli Lilly (NYSE:LLY) to help healthcare providers identify patients who struggle to manage their glucose levels after meals. These patients are prime candidates for Lilly's rapid-acting insulin product.

This isn't the first time the companies have teamed up. In 2019, Lilly announced it would integrate the DexCom devices into its own personalized diabetes management system, which includes pens, pumps, and software.

The need for better diabetes management is global and growing. As the number of patients needing care increases, so do the costs of managing the disease. Although the industry is competitive, the U.S. continues to be a key region thanks to its private health insurance market, which allows insurers to raise prices to cover the expensive glucose monitoring devices and provide an incentive for the companies to continue innovating. DexCom consistently sees nearly 80% of its revenue generated in the U.S.

Abbott has made gains in device design and interoperability, but DexCom remains the technology leader. With a focus on diabetes and a history of industry-leading innovations, it is a growth stock that should be on every investor's radar. The past few years have proved that the company is making the transition from spending for sales growth to accelerating free cash flow. This is the perfect recipe to turn DexCom into a multibagger over the long term.