With a dedication to research and development, strong profit margins, and solid balance sheets, blue-chip pharma stocks are among the best investment choices during a volatile year. Their risk-reward profiles become even better when one can get them at a solid valuation, especially after a steep sell-off.

We all love to buy pharma stocks when they release positive clinical data, but they can also be solid choices for investors looking for businesses to buy on the dip. Here's why a company developing neuroscience drugs and another that's developing therapies for genetic diseases have the most bang for investors' bucks right now. 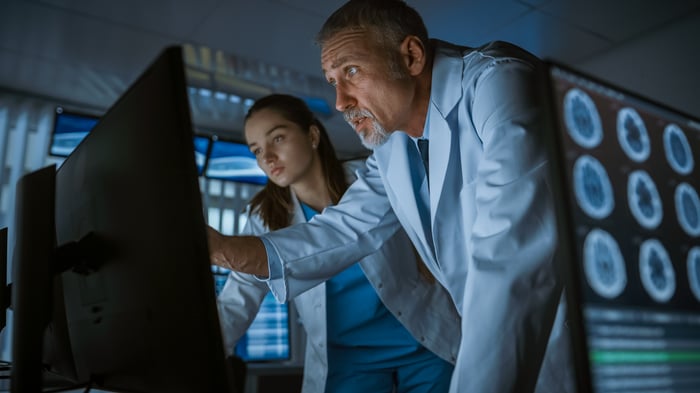 Biogen (NASDAQ:BIIB) encountered an enormous setback recently when a team of panelists from the U.S. Food and Drug Administration (FDA) voted overwhelmingly that the company's aducanumab, which targets Alzheimer's disease, did not demonstrate efficacy in a pivotal phase 3 study. Shares plunged as much as 35% from recent highs after the announcement.

While the FDA will make a final decision of whether or not to approve aducanumab by March 7, the odds are not looking good for Biogen. In a previous article, I warned investors about betting on such binary outcomes, especially since the study already had hallmarks of failure at the time.

At this point, shareholders should not get their hopes up even if the FDA requires Biogen to start a new trial. Clinical studies investigating Alzheimer's disease could involve tens of thousands of patients and cost as much as $1.8 billion over four years. Since FDA panelists did not believe the results from one phase 3 study and aducanumab is already failing another, the prospects for the drug don't appear to be very good.

If that's not enough, Biogen lost a patent litigation case surrounding its multiple sclerosis drug Tecfidera, which would open the door for numerous generic entrants in the U.S. by next year. Biogen expects to bring in $13.4 billion in sales this year, with Tecfidera's U.S. sales accounting for approximately $3 billion. The pandemic has also hurt Biogen's growth, with the company's revenue and earnings per share declining to $3.376 billion and $8.84 in the third quarter of 2020 from $3.6 billion and $9.17 in last year's Q3.

After these material developments, investors are arguably very anxious about Biogen's potential, which creates a value opportunity. Even with its Tecfidera U.S. patent loss priced in, the company is trading for about 3.7 times sales and 16 times earnings (assuming 25% of Biogen's revenue and 50% of earnings are lost from a Tecfidera patent invalidation).

In addition, Biogen is prime to return to growth. The neuroscience company currently has 30 clinical programs in its pipeline, including eight candidates in phase 3 studies and six candidates up for mid- to late-stage data readout by the end of 2021. All things considered, Biogen is likely a rock-bottom value stock at this point and is just waiting to be bought on the cheap.

In October, Vertex Pharmaceuticals (NASDAQ:VRTX) plunged as much as 30% from all-time highs after discontinuing a phase 2 development program to treat liver disease. That leaves Vertex with just four clinical programs in its pipeline. Luckily, the company has ample product revenue to make up for this pitfall.

Vertex's flagship drug is Trikafta, a triple-combination therapy designed to treat cystic fibrosis. During Q3 2020, the company's revenue grew to $1.54 billion from $950 million during the same period last year on Trikafta's prescription growth strength. Simultaneously, Vertex's margins expanded significantly, with its operating margin up 12 percentage points to 56%. The company more than doubled its earnings per share year over year to $2.64.

Vertex's goal is to expand Trikafta's label to treat 90% of cystic fibrosis patients across the U.S. and E.U. For the full 2020 fiscal year, the company expects to generate $6.2 billion in sales, a substantial increase from the $4.16 billion it brought in last year.

After the dip, Vertex is trading for about 9.5 times price-to-sales and 21 times price-to-earnings, which isn't a high price to pay considering the company is growing its revenue more than 50% year over year. Moreover, the company has no debt whatsoever and $6.2 billion in cash and equivalents. I'd strongly recommend adding Vertex to one's watchlist for pharma investors interested in growth at a bargain price.