For the past five months, Simon Property Group (NYSE:SPG) and Taubman Centers (NYSE:TCO) have been embroiled in litigation, after Simon attempted to terminate its planned takeover of Taubman in June. The COVID-19 pandemic has crushed U.S. malls in 2020, giving Simon a strong incentive to try to back out. The top U.S. mall owner believed it had found loopholes in the merger contract enabling it to do just that.

The legal battle was set to be decided in a trial this month. Unsurprisingly, though, neither side was eager to risk losing in court. On Sunday, the two companies announced a settlement in which Simon will go ahead with its purchase of a controlling stake in Taubman, but at a lower price.

Back in February, Simon agreed to buy an 80% stake in Taubman -- including all of its publicly traded stock -- for $52.50 per share. That gave Taubman an equity valuation of a little more than $4.5 billion (or $3.6 billion for Simon's 80% stake). Including its $5.3 billion of debt and preferred stock, the deal valued Taubman at nearly $10 billion.

Considering the level of upheaval the mall sector was facing even before the pandemic, this deal was a no-brainer for Taubman. The high-end mall REIT fought hard to prevent Simon from backing out, and it had a good case -- but it wasn't bulletproof.

Taubman's weak third-quarter results and the struggles of several of its malls demonstrated that Taubman had far more to lose than Simon in their legal battle. As a result, Simon Property Group was eventually able to negotiate a lower price in return for abandoning its quest to back out of the takeover.

Under the revised terms announced on Sunday, Simon Property Group is now set to pay $43/share for its 80% stake in Taubman. While that's 18% less than the original deal price, the implied change in Taubman's enterprise value is much smaller, because the REIT is carrying more debt than it was in February.

The new cash cost to Simon is right around $3 billion. For reference, the company had over $9.7 billion of liquidity as of Sept. 30. Thus, even after buying an 80% stake in Taubman, Simon will have plenty of flexibility to withstand any incremental earnings pressure related to the pandemic or tenant bankruptcies and to reinvest in its properties.

The transaction is now on track to close in late 2020 or early 2021. Taubman is prohibited from paying dividends on its common stock until at least next March.

A promising long-term investment for Simon

If it were starting from scratch, Simon Property Group probably wouldn't agree to pay even $43 per share for Taubman Centers. After all, mall valuations have plunged this year due to the pandemic. Indeed, Simon's own stock price has fallen by nearly 50% year to date. 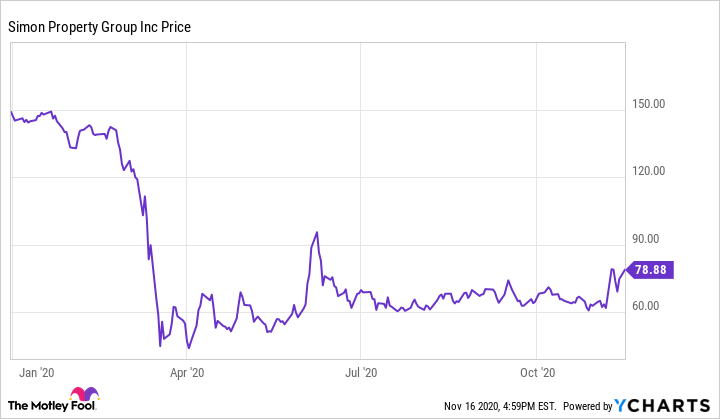 However, if Simon hadn't reached a settlement with Taubman, it would have risked losing in court and being forced to complete the transaction at the original, higher price. Moreover, while it is probably overpaying by a bit, it is undoubtedly getting some very good assets in return. Taubman owns a focused portfolio of about two dozen malls, including two of the most valuable malls in the U.S.: Miami's Dolphin Mall and the New York metro area's Mall at Short Hills. It also owns numerous other regionally dominant malls.

Simon's broad relationships with potential tenants and ample liquidity should enable it to fix up Taubman's more problematic assets over time. Meanwhile, the top-tier malls it is acquiring should naturally recover any lost value over the next few years. In the long run, Simon going ahead with the Taubman buyout at a discounted price is likely to be good for shareholders of both REITs.