It's natural for investors to search for bargains when hunting for suitable companies to invest in. After all, this practice is widespread when we go grocery shopping, as there is a tendency to look for discounts that allow us to save some money. However, in the stock market, cheap does not always equate value. Penny stocks may look cheap at first glance, but they may stay cheap for a good reason. Some companies may have lost their competitive edge and be on the road to terminal decline, while others simply cannot muster the strength to outwit the competition and grab more market share.

If you were thinking of purchasing some penny stocks, stop and have a look at these three larger, and more stable, businesses first. 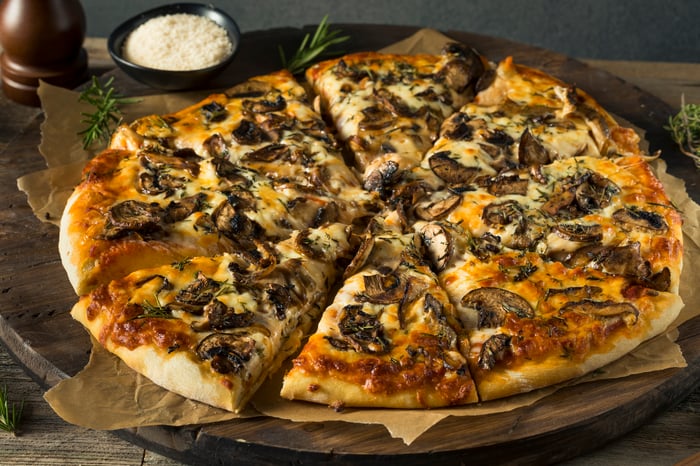 Domino's Pizza (NYSE:DPZ) has the lion's share of the pizza delivery industry at 36%, and has a market capitalization of around $15.4 billion. The company's total store count stood at 17,256 as of Sept. 6, 2020, and the business saw net store growth every single year from 2012 to 2019. Domino's saw sustained growth when it reported its third-quarter earnings, with total revenue rising 18% year over year to $968 million and net income rising nearly 15% year over year to $99.1 million. The COVID-19 pandemic has accelerated the company's growth as more people stayed home and ordered food in to avoid catching the virus.

Domino's looks poised for further success as it continues to push on with its international expansion. The company believes it can open an additional 8,000 stores in the U.S. alone, while there is a potential to open another 5,200 in the top 15 markets such as Australia, India, Japan, and the U.K.

Singles who are using dating apps in their search for a suitable partner have probably heard of Match Group (NASDAQ:MTCH) and its portfolio of dating apps. Tinder, the company's most successful app, has grown over the last eight years to become the highest-grossing app in the lifestyle category in more than 100 countries.  The company has demonstrated consistent growth over the last five years, with revenue rising at a compound annual growth rate of 23% from the third quarter of 2015 to its current quarter.

CEO Shar Dubey has reported growth across all aspects of the company's business in its latest conference call, as well as a 23% year-over-year increase in non-Tinder revenue. Hinge, an app that emphasizes long-term relationships, has demonstrated explosive growth since it was acquired by Match last year. Match is continuing with its three-pronged approach to grow its business further: Growing Tinder, helping some of its legacy apps to turn around, and making new forays into apps that can contribute to the company's overall growth within a short time frame.

Tractor Supply Company (NASDAQ:TSCO), a dominant rural lifestyle retailer with a $15 billion market capitalization, is still witnessing strong growth for its wide assortment of products. In its recent third-quarter earnings report, the company announced that net sales increased 31.4% year over year, while comparable store sales improved by 26.8%. Net income soared 56% year over year to $190.6 million as the company acquired more customers and people continued to patronize its stores for essential gardening, farming, and pet products.

Tractor Supply has enjoyed more than a decade of positive traffic growth and continues to believe that it has great potential for further growth. It estimates that it has just a 10% market share in a highly fragmented market that is worth around $110 billion, and that it has the opportunity to increase its total store count to 2,500 from its current 1,904.

Larger, more established companies usually trade at more expensive valuations. Investors, however, are paying up for their quality, track record, and perceived future growth prospects, such as the above three companies. No rule says large companies cannot continue growing, and time and history have shown that even billion-dollar companies have gone on to post impressive long-term growth rates.