Free discount coupons for prescription medicines allowed GoodRx (NASDAQ:GDRX) to make a name for itself and pull off a successful initial public offering in September. That success hasn't gone unnoticed by other companies that already have access to lots of consumers, including Amazon (NASDAQ:AMZN). 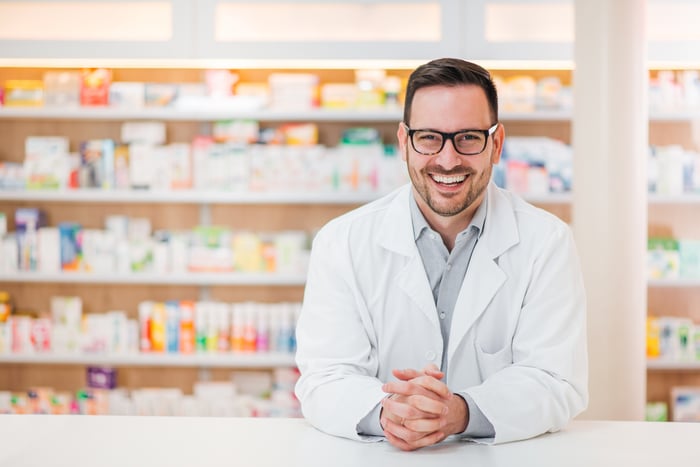 Coming for the underinsured

Traditionally, healthcare plan sponsors hire pharmacy benefits managers (PBMs) to negotiate with drug manufacturers from a position of strength. The digital coupons that put GoodRx on the map route prescription drug sales through a PBM for people without insurance coverage.

Many of GoodRx's 4.9 million monthly active consumers have health plans, but end up paying less out of pocket for prescriptions that GoodRx runs through one of its PBM partners. The growth of GoodRx's customer base has been impressive, but pales in comparison to an estimated 126 million U.S.-based Amazon Prime members.

GoodRx has taken steps to reduce its reliance on prescription transaction revenue. In 2019, GoodRx acquired its own telehealth service, HeyDoctor, and this March, the company launched a telehealth marketplace to connect consumers with third-party providers.

GoodRx doesn't break down how much revenue its telehealth offerings generate, but it probably isn't as much as the company hoped. The prescription coupons that made GoodRx famous still comprise 89% of total revenue.

The bulk of $16 million in other revenue that GoodRx reported in the third quarter came from a subscription-based partnership with Kroger that allows members to access low-cost medicines at thousands of Kroger Pharmacy locations.

Who has the advantage?

Amazon is partnering with Express Scripts, Cigna's PBM business, to provide lower prices for Prime members who want to pay for a prescription without their insurance. Express Scripts is one of three PBMs that GoodRx relied on for a combined 44% of total revenue during the first nine months of 2020.

While GoodRx's relationship with Express Scripts could become strained, the smaller company's wider array of PBM partners should lead to better deals for its customers in the short term. Unfortunately, this advantage isn't very durable.

Look out for contracting margins

In the third quarter, GoodRx reported $53 million in adjusted earnings before interest, taxes, depreciation, and amortization (EBITDA) with just $141 million in revenue. This impressive profit margin exists because the prices on its digital coupons don't represent all of the savings its PBM partners provide.

We don't know what Amazon has planned for its Prime prescription savings benefit program, but we can expect it to compete for consumers. Keep an eye on GoodRx's bottom line for signs it's lowering prices to gain and retain customers who also have Prime memberships.