My dog has recently discovered Freshpet (NASDAQ:FRPT). Freshpet is a company that is the "top dog" and first mover in a new pet food niche: refrigerated food. This is a fast-rising sub-sector that is threatening to upend the whole pet food industry. That's because your average kibble is filled with artificial preservatives and chemicals that are bad for your dog and cat. By using refrigeration, Freshpet can make its food healthier for pets. And it also tastes a lot better.

My dog Vanna runs into the kitchen before I put it in her bowl. That's how much she likes it. It's right up there with people food, in her opinion. Freshpet's dog food actually looks like people food. In fact, the company did a secret taste test with people, and they seemed to like it, too(!) 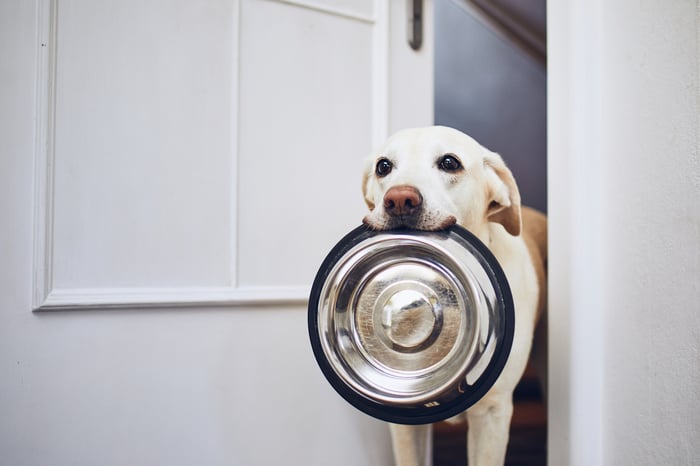 Since my dog thinks Freshpet is the best dog food ever, I decided to research the stock and discovered that it is publicly traded. What an amazing run this company has had. It's one of those Peter Lynch stocks -- a low-status "boring" company and one that even amateur investors can easily understand. Yet Freshpet has outperformed a lot of elite biotech stocks that are splicing genes, and a lot of brainiac stocks that involve writing computer code. It's even outperformed some internet all-stars. You like FAANG stocks? Freshpet has been killing FAANG for years. It's taken FAANG and buried it out in the backyard.

One really nice thing about this stock is that it's still very early in Freshpet's story. While the company is the dominant player in refrigerated pet food, the vast majority of the estimated $90 billion worldwide market for pet food is not refrigerated yet. So there is room for fantastic growth, as refrigeration wins the battle for your dog's food bowl. And as the first mover in "fresh" food for your pet, Freshpet has incredible advantages over any new competitors who try to follow.

When you shop for groceries, how many fridges do you see in the dog food aisle? Chances are the answer is going to be one or zero. If there is a refrigerator, it belongs to Freshpet. The company enjoys a near-monopoly in refrigerated pet food, at least in grocery stores. That's because the company has provided thousands of fridges to retailers for free. So now the company dominates this valuable shelf space. For Purina or any other pet food manufacturer that wants to compete, they would have to convince grocery stores to add another refrigerator in the dog food aisle.

While shares are expensive, with a price-to-sales ratio of 16, Freshpet has a fantastic future. If you have any doubts, buy a bag for your dog, and see what happens.

If I bought shares of Freshpet five years ago, that stock would have outperformed almost all of my other stocks, with a handful of exceptions. One of them is Afterpay (OTC:AFTPF), the top dog and first mover in the "buy now, pay later" category that is transforming retail check-out.

Afterpay only went public in 2017, in Australia. It's returned 3,178% since then. That's a 30-bagger in three years. The stock is not traded on a U.S. exchange, but you can buy shares of its American depositary receipt (ADR). The ADR for Afterpay was started in 2018, and it's run up 1,100% in a little over two years.

Because of all this amazing growth, the Fools in Australia are talking about finding "the next Afterpay." In Australia, Afterpay is old news, which is funny, because in the U.S., so many people have never heard of this company. Instead of trying to find the next Afterpay, Australians might want to buy shares of the first Afterpay. Despite the fantastic gains the stock has had so far, there's still a huge runway of growth ahead internationally.

Afterpay is a fintech company but also a powerful consumer brand. If you have bad credit, or you just want to avoid using credit cards, Afterpay might be right up your alley. The company has declared war on credit cards. It provides free credit to people and runs no credit checks.

The company has very low defaults -- 0.6% of underlying sales. How does Afterpay do it? The company only approves one loan at a time, and if you miss a payment, you're not approved for any more debt until you're paid up.

Afterpay makes its money by charging the retailer a small service fee. So far, retailers are signing up for the service in droves because consumers often use Afterpay to buy high-ticket items.

Growth has been so fantastic, companies like Shopify (NYSE:SHOP) and PayPal (NASDAQ:PYPL) are attempting to copy Afterpay's business plan. Shopify is a $116 billion business. PayPal is a $226 billion business. And yet, it's the $20 billion Afterpay that is the first mover in this space and the one that is transforming the way people shop. The Shopify and PayPal solutions appear to be just a virtual credit card, one requiring consumers to undergo a credit check, which can be annoying at the checkout counter.

Nonetheless, Afterpay has swiftly responded to these new competitive threats by aligning itself with Stripe, a privately held digital payments platform. This partnership will allow the millions of retailers that use Stripe to set up a payments system for their website to add an Afterpay option at checkout.

While internet retail is important for Afterpay, the company actually has bigger ambitions. It wants its service to be used in brick-and-mortar retail as well. It's long been that way in Australia; now in the U.S., shoppers will start to have an Afterpay option in physical stores.

How fast is the company growing? The company reports that underlying sales volume in the U.S. jumped up 229% from the year-ago quarter.

Afterpay and Freshpet are two under-the-radar stocks that have stomped the market in the past and should continue to outperform over the next several years as these companies grow and expand their business. I'm very bullish on both these names.