It's been an amazing year for electric-vehicle (EV) stocks, as investors have bid shares of a number of companies higher on expectations that the automotive industry is going electric.

Tesla has led the charge higher, up nearly 500% for the year, but investors today have a large and growing number of stocks to choose from when it comes to EVs.

These are early days, and the sudden run-up does feel like it could be a bubble. Some of these companies are sure to not live up to their promise. But the potential for EVs is real, and even if the market is a bit frothy right now, strong, long-term businesses do tend to emerge from a bubble. The question is, how do you separate the survivors from the pretenders?

As the headline suggests, these stocks are not by any means guaranteed winners. Investors should limit any exposure to these stocks to a small part of a diversified portfolio. But for those interested in taking a high-risk, high potential reward flier on a next-generation electric-vehicle stock, here's why we think Nikola (NASDAQ:NKLA), NIO (NYSE:NIO), and XPeng (NYSE:XPEV) merit your consideration. 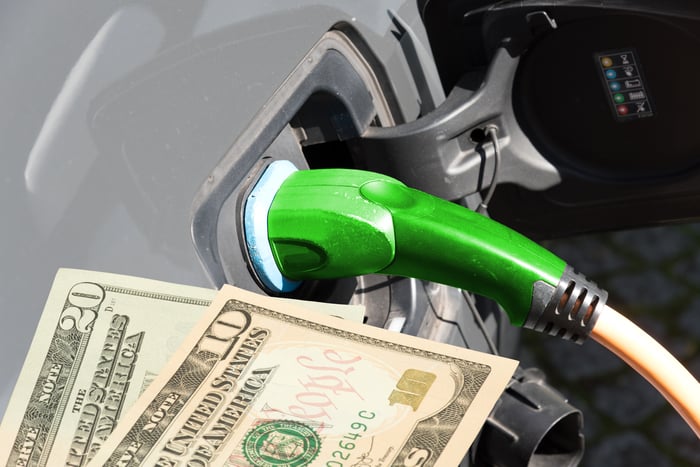 Don't count Nikola out just yet

Lou Whiteman (Nikola): My Foolish colleague Danny Vena, one of the smartest investors I know, says he wouldn't touch Nikola stock with a 10-foot pole. Given the controversies that have surrounded the company in its brief time as a public company, his caution is understandable.

Nikola faces accusations that it overhyped its products and technologies in investor demonstrations, and founder and former executive chairman Trevor Milton has left the company under a dark cloud. A deal the company struck to partner with General Motors (NYSE:GM) is in doubt.

The accusations against Nikola boil down to skepticism about the strength of its technology. Nikola arguably admitted as much in its attempt to partner with GM and use the larger automaker's tech.

It all looks terrible. But it is also all in the past. If Nikola can get the deal with General Motors over the finish line, I believe there is a decent shot the core business can still turn into something.

Nikola is under new leadership, including Steve Girsky, onetime GM vice chairman, on the board. Also, prior to the controversy, the company enjoyed strong consumer interest in its Badger electric pickup and had already taken 14,000 preorder reservations for a line of heavy-duty trucks.

At the end of the day, Nikola just has to deliver a product that lives up to the hype. Customers aren't going to care if it is technology developed in-house or acquired by GM powering their trucks if the trucks perform as promised.

I'm cautiously optimistic that Nikola, with GM's help, can get there. And although the stock still isn't a bargain, it is down more than 65% from its June highs.

The risk is real, and the caution is understandable. But despite Nikola's miserable run in recent months, there is still a chance for a happy ending for this EV truck company.

This stock is up big in 2020, but it could be just the beginning

John Rosevear (NIO): NIO's stock has already surged far beyond anyone's expectations in 2020. Even those who expected great things for the Chinese electric-vehicle maker wouldn't have predicted a gain of over 1,700% since April 1.

But here's the thing: There might be more to come.

As the example of Tesla has shown us, sometimes a company's exciting potential is more important than traditional green-eyeshade measures of valuation. That might be what's happening with NIO, which has emerged as a homegrown leader in China's booming market for electric vehicles. 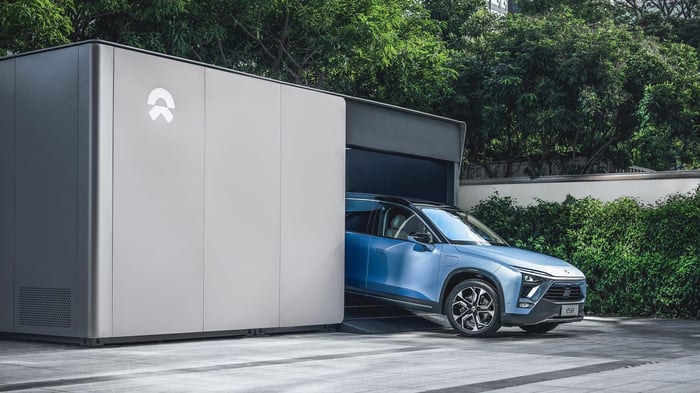 NIO's automated battery-swap stations, which can "recharge" a vehicle in three minutes, have opened up new revenue streams for the company. Image source: NIO.

While it's not impossible that NIO's stock will retreat after such a run, it's also not hard to see catalysts for future growth over the next few quarters. Consider:

NIO is also investing some of the proceeds of its recent secondary offering in its advanced driver-assist and self-driving research, for which it has partnered with global tech leaders including Intel's Mobileye subsidiary. That's yet another area where technology and smart thinking could create recurring revenue streams.

Long story short: Yes, NIO's stock is expensive. But Tesla's stock seemed expensive at $200 a share, and look what happened. If you feel like you missed out on that rocket, here's another that also could go sky-high in time.

This Chinese EV maker is growing like a weed

Rich Smith (XPeng Inc.): Let me preface my stock idea today with a disclaimer: I do not invest in stocks that I cannot hang a valuation on. Full stop.

If a company has no profits, and no free cash flow, it's not a stock I want to buy -- no matter how fast it's growing revenue. That being said, I have to admit that I do find Chinese electric-car manufacturer XPeng intriguing -- and I'm apparently not alone.

I mean, how can you not be fascinated by a company that's gone from barely $1 million in revenue two years ago, to more than a half-billion dollars in sales recorded over the last 12 months? Last week, XPeng reported that in Q3 alone, it grew its sales 365% year over year, achieving generally accepted accounting principles (GAAP) gross profitability for its first time ever (gross profit margins: 4.6%).

Admittedly, operating and other costs did mean that XPeng ended up losing money, with a $169 million net loss on the bottom line. But even so, the company vastly outperformed Wall Street's expectations for the quarter. In fact, analysts at J.P. Morgan called the results "a clear beat from the top to the bottom line."

XPeng is quite simply growing like a weed, projecting that Q4 unit sales will grow 17% sequentially. Assuming the company can keep this up, the stock could conceivably even grow faster than the Chinese market for "new energy vehicles" (i.e., EVs, plug-in hybrids, and fuel cell cars) as a whole -- which is amazing, seeing as analysts are forecasting that sales of such "NEVs" will grow 43% annually over the next five years.

I don't know when -- or if -- all of this tremendous sales growth will translate into actual GAAP profitability for XPeng, but it sure is fun to watch.