Many investors are concerned that a contentious election or changing tax policy will negatively impact their asset performance. Historical results and early market reactions indicate that there is no reason to panic, so more politically biased people should take care to eliminate emotion from investment decision making.

Nonetheless, some people may experience meaningful changes to their taxes. Presidential election results should not cause any drastic reallocation, but investors may find it helpful to investigate efficient investment vehicles or think about the timing of future transactions to avoid proposed capital gains tax increases. 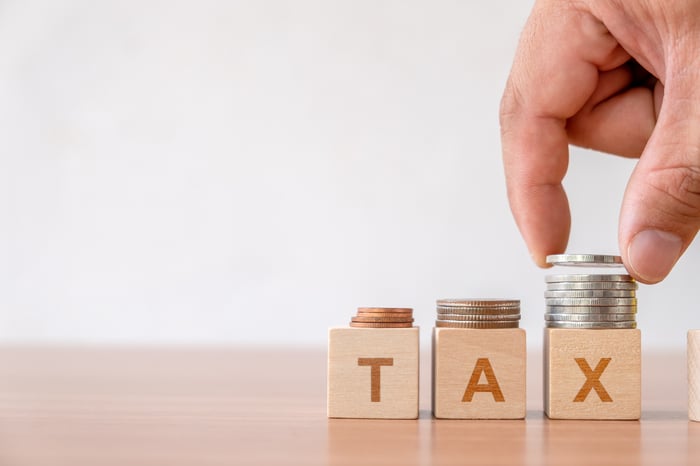 Joe Biden has proposed raising capital gains rates, but not for everyone

President-elect Joe Biden's official tax plan calls for an increase to long-term capital gains rates, which would step up to ordinary income levels for earners over $1 million. A Republican controlled Senate could prevent this legislation from being passed, but the outcome of the last few seats remains unknown, leaving some uncertainty for investors.

Long-term capital gains tax rates are currently 15% for individuals earning more than $78,750 but less than $434,550 annually. Above that threshold, it steps up to 20% for individuals. Joint filers have a higher threshold, at $488,850. Biden's proposal only changes rates for earners above $1 million, but the tax rate on those gains could nearly double for that group, to 37% under current law. Around 99% of Americans have incomes below $300,000, so there are very few people to whom the $1 million threshold will apply.

Furthermore, these changes would not impact liabilities for holdings in IRS-recognized retirement plans such as 401(k)s, 403(b)s, traditional IRAs, or Roth IRAs. All of these accounts have specialized tax treatment that has not been addressed in the current policy proposals. Even if that were at stake, distributions from tax-deferred accounts are taxed as ordinary income, and the increase in capital gains rates is not proposed to exceed ordinary income.

This should still be on some people's radar

Even though many people will be unaffected, there are still investors who would feel the negative effects of this policy. The sale of privately held businesses or real estate could easily exceed the $1 million threshold one time for people who may not have high earned income. Wealthy investors who are liquidating or rotating a portfolio are also potentially exposed.

Mutual funds incur capital gains taxation at the fund level when holdings are liquidated, so this could meaningfully contribute to the return erosion experienced by mutual fund shareholders. This would be especially true for funds with high redemption activity, which forces them to sell assets before paying out the exiting shareholders. More than 45% of American households own mutual funds, so this is relevant to many investors, albeit at a lower magnitude than large realized gains.

Again, it would not be prudent to make any drastic changes to allocation in this situation, but investors would be wise to consider some options that would reduce outflows to the government. The tax efficiency gap between ETFs and mutual funds would grow wider under the proposal, so investors should consider substituting mutual fund holdings with ETFs when appropriate substitutes with similar methodology are available. This is one simple strategy that could improve net returns without changing portfolio allocation at all.

This may also be a critical moment for investors who are approaching planned asset rotations due to aging, retirement, or other circumstances, such as the sale of a private business or property. Pre-retirees often reduce equity exposure and shift toward bonds as they approach the planned cessation of earned income. It could make sense to accelerate such a rotation by several months for investors who hold assets with large embedded capital gains liabilities. Late-career earners could reduce potential capital gains tax outflows by 50% while taking on less volatile assets that produce dividends and interest.

Investors considering this tactic should note that dividends and interest are treated as ordinary income, which would potentially be taxed at the rate that they were attempting to avoid in the first place. That said, the appreciated capital in a portfolio is almost certainly a much larger number than the passive interest yielded. Rotation steps up the cost basis and allows investors to circumvent higher taxes while moving to lower-risk positions.

Ultimately, Biden's capital gains tax rate proposal should not instigate any drastic reactions from investors, and it shouldn't prompt fundamental changes to your asset allocation. However, there are some smart decisions around timing and investment vehicles that can optimize net returns.