Even for people who like to bet on the underdog, it doesn't make much sense to place a bet after the race is over. Now that Moderna and Pfizer have both announced that their coronavirus vaccine candidates appear to be effective at preventing infection, distant laggards look less desirable than ever. That is, until you realize that the coronavirus vaccine race was never a winner-take-all scenario, at least.

Inovio Pharmaceuticals (NASDAQ:INO), Vaxart (NASDAQ:VXRT), and Novavax (NASDAQ:NVAX) aren't going to start selling their candidates to the public anytime soon, but they could still be lucrative stocks. All three have moved more slowly than Moderna and Pfizer, but they share one of the same challenges. Much like the two probable victors, each company is relying on a unique and unproven technology or scientific approach to make its vaccine. These technologies could easily make these companies worth betting on -- as long as you're comfortable with a deferred payoff. 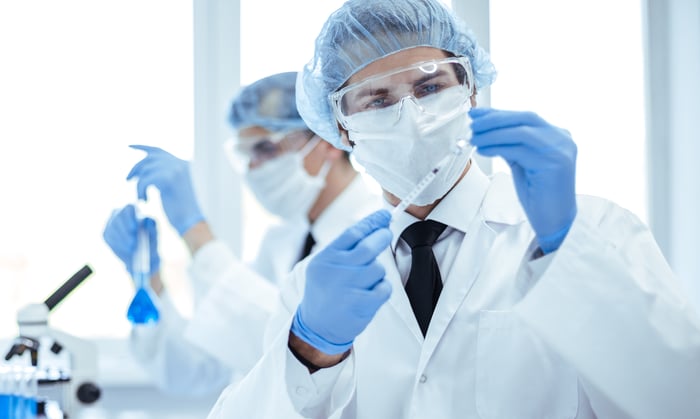 Investors breathed a sigh of relief several days ago when the U.S. Food and Drug Administration (FDA) finally gave Inovio the green light to proceed with its combined phase 2/3 vaccine trial. This go-ahead means it can leave the limbo that it entered in late September when the FDA forced its trial to pause after the completion of its first phase. Technically, Inovio still needs to resolve a few of the FDA's questions regarding its Cellectra 2000 injection device before it can advance from phase 2 to phase 3, but at least it isn't completely blocked anymore. Once it gets the OK from the FDA, it probably won't encounter the same issue when the time comes to advance its other pipeline projects.

As a bonus, Inovio also announced that the U.S. Department of Defense would be footing the bill for both phases of the trial thanks to the government's interest in the Cellectra 2000. While the phase 2 component of the trial will be quite small with only 400 participants, the fact that Inovio is proceeding at all means that it is back in the game. Keep an eye out for growth catalysts like preliminary efficacy data, as well as any additional collaborations with U.S. government entities, both of which may be imminent.

Earlier this month, Vaxart released a bit more data from its preclinical research program that supported its bid to enter phase 1 clinical trials. In short, its candidate significantly reduced the viral load observed in the lungs of vaccinated hamsters compared to a placebo. This result is positive, but investors should take care not to read too much into it. If Vaxart didn't have a strong preclinical study with animal models in hand, it probably wouldn't have proceeded to trials in humans. Plus, animal models are only a rough proxy for how a vaccine or medicine will perform in humans.

On that note, Vaxart just finished enrolling people in its vaccine's phase 1 clinical trial, which had started to dose participants in October. This means that it might have some preliminary safety data to share by the end of this month. Whenever the company does decide to start sharing safety data, investors should pay close attention to any reports of gastrointestinal side effects. Because Vaxart's candidate is in pill format thanks to the company's technology platform, its palatability and tolerability may be surprisingly good compared to the other vaccines -- or perhaps the opposite.

Novavax jumps onto the fast track

Earlier this month, Novavax announced that the FDA had granted its candidate a fast track designation, which puts it at a high priority for regulatory review. Phase 3 trials in the U.S. are scheduled to initiate by the end of the month, and similar trials are enrolling around 15,000 people in the U.K. The efficacy reports should start to roll in during the first months of 2021.

At the moment, Novavax is missing a compelling story that explains to investors how its vaccine could outcompete other products in the market, assuming it's approved. While the company does have a special immune system-boosting technology called Matrix-M that aims to improve the effectiveness and dosing economy of its vaccines, it's still unproven. If it can demonstrate in the context of a clinical trial that Matrix-M confers some decisive advantage over other boosters, Novavax will be sitting on a gold mine both with its coronavirus program and its other pipeline projects.