The next few weeks represent a critical moment in the coronavirus vaccine race. That's because a vaccine may soon be authorized for use. Pfizer (NYSE:PFE) recently became the first vaccine developer to apply for Emergency Use Authorization (EUA) from the U.S. Food and Drug Administration (FDA). And four other programs out of the U.S. and Europe are close behind.

The pace of this race is accelerating as the finish line approaches. So, for investors hoping to identify the near-term winners, it's important to closely follow the situation. Here's what to watch for next. 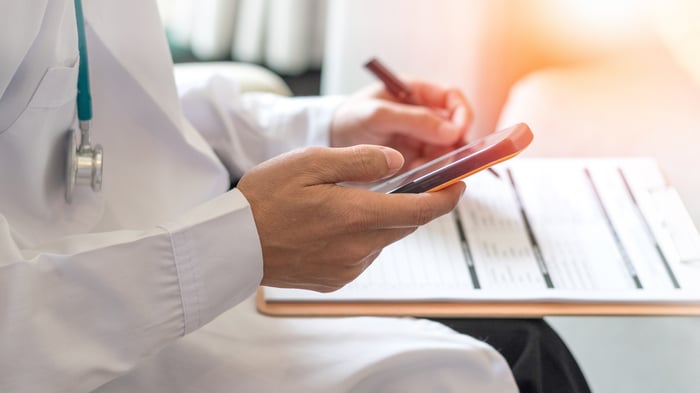 Moderna (NASDAQ:MRNA) has led this race from the start. Back in March, the biotech company became the first to launch an investigational coronavirus vaccine in human trials. Since then, the program has progressed smoothly, with a late-stage trial beginning in July. Last week, Moderna announced positive data from that trial. It involved more than 30,000 participants who were given either Moderna's vaccine candidate or a placebo. The first interim analysis showed vaccine efficacy of 94.5%. The analysis was based on the development of 95 cases of COVID-19. Only five of those confirmed cases were in the vaccinated group, and the rest were in the placebo group. Eleven of the COVID-19 cases were severe -- and all of those occurred in the group that received placebo.

The company also said the vaccine didn't produce safety problems. This is a critical point for regulatory authorization. But Moderna has to wait a few more days to apply. The FDA requires two months of follow-up safety data prior to considering a candidate for EUA. Moderna CEO Stephane Bancel said earlier that requirement would be met as of Nov. 25. So, later this week, we might expect news of an EUA request from this early leader.

The coming days may also bring a regulatory submission from AstraZeneca (NASDAQ:AZN). The big pharma company announced data from phase 3 trials of its investigational vaccine on Monday morning.

AstraZeneca studied its vaccine in two dosing regimens. Both involved two doses of vaccine. The regimen with a half-dose followed by a full dose a month later produced the best result, with 90% efficacy. The other, two full doses given a month apart, showed 62% efficacy. Of those who received the vaccine, none developed a severe case of COVID-19. This analysis examined 131 coronavirus cases. The trial includes more than 23,000 participants who were given one of the two dosing regimens or placebo.

While AstraZeneca's efficacy results so far aren't as strong as those of rivals Moderna or Pfizer, that doesn't mean it's lost its shot at EUA. There is worldwide need for a vaccine, so regulatory bodies are likely to authorize several vaccines -- as long as efficacy and safety meet certain thresholds. The FDA says it expects at least 50% efficacy from a coronavirus vaccine candidate. This means AstraZeneca and others meeting this goal and safety guidelines are on the right path.

AstraZeneca says it "will now immediately prepare regulatory submission" in all countries that offer emergency authorizations.

As mentioned above, Pfizer already applied for an EUA after announcing trial results earlier this month. The company's vaccine candidate showed 95% efficacy in a trial involving more than 43,000 participants. The analysis included 170 cases of COVID-19. Of those, 162 occurred in participants who received the placebo and eight occurred in those who received the investigational vaccine. Nine of the 10 severe cases of COVID-19 were in the placebo group; one was in the vaccinated group.

So, what's next for Pfizer? The FDA has scheduled a Dec. 10 meeting to discuss the company's results with its Vaccines and Related Biological Products Advisory Committee (VRBPAC). The FDA doesn't have to follow VRBPAC's recommendations. But it does seriously weigh conclusions from this panel of experts before making a decision. The FDA didn't say how long its review will take, but government officials are aiming for year-end commercialization. Operation Warp Speed's chief scientific advisor, Dr. Moncef Slaoui, told CNN the government may begin shipping a vaccine as early as Dec. 11.

Near-term share gains may be on the horizon for all three companies -- if the FDA grants them EUAs. But I wouldn't expect a dramatic stock gain from Pfizer or AstraZeneca. Considering their vast array of marketed products, these big pharma companies won't depend on the potential COVID-19 vaccine for revenue.

In the final stages of this race, Moderna is likely to benefit the most. The biotech company doesn't yet have other products on the market, so investors' hopes have been riding on the coronavirus vaccine candidate. A win here could offer a big lift now and in the future as revenue starts rolling in.