You hope that every single stock you buy goes up. Otherwise, you wouldn't buy the stocks in the first place. Predicting whether they'll actually appreciate in value and by how much is just guesswork.

It's easier to guess with some stocks than with others, though. There are certain stocks that have such tremendous growth prospects that even a relatively small upfront investment could pay off handsomely in a relatively short period of time. If you've got $3,000, here are three such growth stocks to buy that could skyrocket. 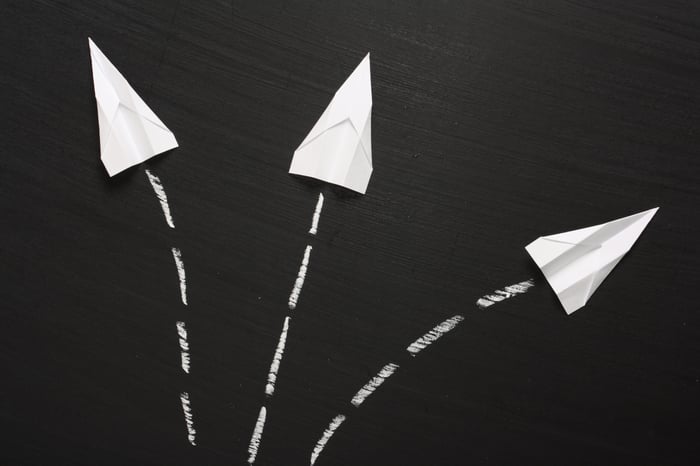 Guardant Health (NASDAQ:GH) has already been a big winner, soaring close to 250% since its initial public offering in late 2018. The good news for investors is that the company has barely begun to scratch the surface of its potential.

In August, Guardant Health's Guardant360 CDx became the first liquid biopsy test approved by the U.S. Food and Drug Administration for comprehensive tumor mutation profiling across all solid cancers. Liquid biopsies are tests that analyze DNA fragments of tumors in the blood. Comprehensive tumor mutation profiling enables the identification of specific types of cancers, which can be used to determine the most effective treatment.

Guardant Health is on track to generate revenue of close to $300 million this year. That's only a drop in the bucket compared to the $6 billion potential U.S. market that Guardant360 CDx targets.

The market for Guardant360 also pales in comparison to the estimated total addressable U.S. market of more than $45 billion for Guardant Health's LUNAR liquid biopsy tests. The company is evaluating two tests in clinical studies: LUNAR-1 for cancer recurrence monitoring and adjuvant (secondary) cancer treatment and LUNAR-2 for early stage cancer detection. If these products are successful, Guardant Health will become a much bigger company over the next few years.

MongoDB's (NASDAQ:MDB) performance has been even more impressive than Guardant Health's. The stock has doubled so far this year and is up close to 800% over the last three years. Can MongoDB go even higher? Absolutely.

The company offers arguably the best cloud-based database on the market. In October, MongoDB announced that its Atlas product is the first cloud database that enables customers to run applications simultaneously on all major cloud providers -- Amazon Web Services, Google Cloud, and Microsoft Azure. This could be a big draw for customers who want to leverage the strengths offered by each cloud provider.

Organizations are flocking to the cloud. The COVID-19 pandemic has only accelerated this migration. At the end of 2019, MongoDB claimed more than 15,900 customers in over 100 countries. Its customer count now tops 20,200, with nearly 19,000 of them using Atlas.

Despite its tremendous growth, MongoDB's market cap is still only around $15.5 billion. The company remains a much smaller player than the leaders in the database market. This relatively small size combined with an enormous market should give MongoDB plenty of room to run.

If you liked MongoDB's gains, you'll probably love The Trade Desk (NASDAQ:TTD). Its shares have vaulted close to 230% higher year to date. Over the last three years, The Trade Desk has skyrocketed around 1,560%.

This company is a textbook case of being in the right place at the right time. The Trade Desk markets the leading software platform for advertisers to buy digital ads. The rise of connected TV (CTV) -- televisions connected to the internet -- has created a massive opportunity for digital advertising.

The Trade Desk CEO Jeff Green stated in the company's Q3 conference call that "broadcast TV is a ticking time bomb where the economics are unsustainable." He's right. CTV, on the other hand, offers advertisers a way to target specific audiences and obtain detailed data about which ads are most cost-effective.

The company plans to launch one of its biggest platform upgrades ever in 2021. The last big upgrade in 2018 fueled significant market share gains for The Trade Desk. If history repeats itself, more big gains could be right around the corner. With CTV still only in its early stages, The Trade Desk should remain in the right place at the right time for years to come.