The holy grail of investing is finding stocks that you can own for a lifetime. These companies should have a strong competitive moat, long-term growth catalysts, a dominant market position, and a competent management team that knows how to allocate capital efficiently. By owning such stocks over years, you can easily compound your wealth.

The search can be arduous, but you can rely on two aspects to help quickly identify whether a company might deserve a long-term place within your investment portfolio. The first is whether it has a great track record of growth through good times and bad. That speaks to management's skill. The second is whether conditions are right for it to continue growing.

Here are two stocks that I think qualify as long-term buy-and-hold candidates. I would hold them "forever." 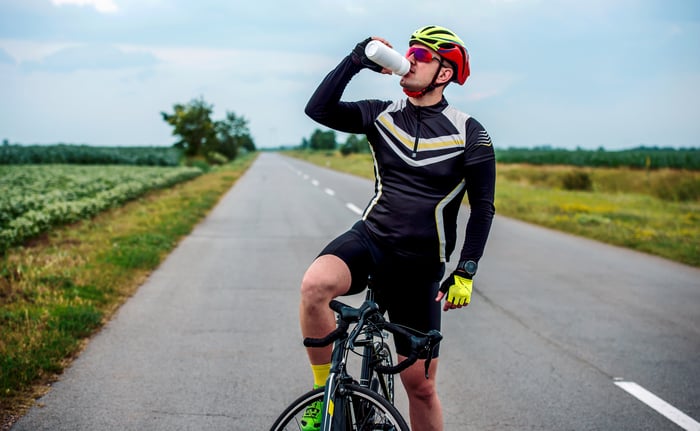 Facebook (NASDAQ:FB) remains a dominant social media force. The owner of both Instagram and WhatsApp has grown its revenues and net profits by leaps and bounds over the years as more and more people join its various platforms. The company benefits from powerful network effects that make its platforms invaluable for advertisers. Its advertising revenue for the third quarter amounted to $21.2 billion, up 22% year over year.

In the chart below, you can see how the number of Facebook users has been growing.

The chart above shows there has been a consistent increase in both daily active users and monthly active users over the last two years. The pandemic has acted as a catalyst for the company in this regard as in-person socialization has been curtailed. And as more people in emerging economies gain access to the internet and smartphones, Facebook should see the number of users continue to rise.

Another tailwind for user growth is the increasing number of small business owners turning to Facebook to advertise. The pandemic has pushed more businesses online, and Facebook is an effective medium for them to reach out to customers. Facebook is also working on initiatives to link messaging across all their products, which should attract more people onto its platform as lockdowns continue to keep people physically apart.

Facebook also continues to innovate and adapt. Recently, it added new features for its Instagram photo and video-sharing platform, including one that allows users to activate a "chat theme,"  and another that allows groups of friends to watch the same movies or shows simultaneously within a video chat. Chat themes allow you to choose different colors or backgrounds to categorize different people or groups and is an attractive feature that has excited many.

The company has also ventured into the cloud gaming market through Facebook Gaming. It recently launched several free cloud-streamed games that can be played through both its app and browser, and which have already racked up 200,000 players per week. Facebook does not make money directly off game streamers. In fact, some of these streamers are paid for attracting users to log onto Facebook Gaming to watch live gaming action, and this helps to bump up the active user numbers on Facebook's platform, an attractive feature for advertisers (who are ultimately the ones paying Facebook). Each gamer needs to have at least 100 followers before he even starts earning any money from Facebook (and meet other qualifications), which is an excellent incentive for them to gather more users onto Facebook's platform.

Many people who want more of an energy boost than coffee or soda can provide turn to the products of Monster Beverage (NASDAQ:MNST)to get it. The energy drink maker has grown both its top and bottom lines consistently over the years, and it has cultivated a strong brand presence.

On the company's latest earnings call, CEO Rodney Sacks noted that for the four-week period that ended Oct. 24, the company's market share in the energy drink category in the convenience and gas channel was 38.2%, a slight decrease from the previous year but ahead of rival Red Bull's 36.4%, which was a gain of 3.1 percentage points. Although it may seem that Monster's rival is gaining ground, investors should note that these are just numbers representing four weeks of data, and may not represent a long-term trend. The fact that Monster was ahead of its closest rival during this portion of the pandemic shows how its share is holding up well despite the disruption caused by shutdowns. With the impending release of new products, Monster should be able to continue cementing its pole position within the industry.

Check out the chart below for some numbers. 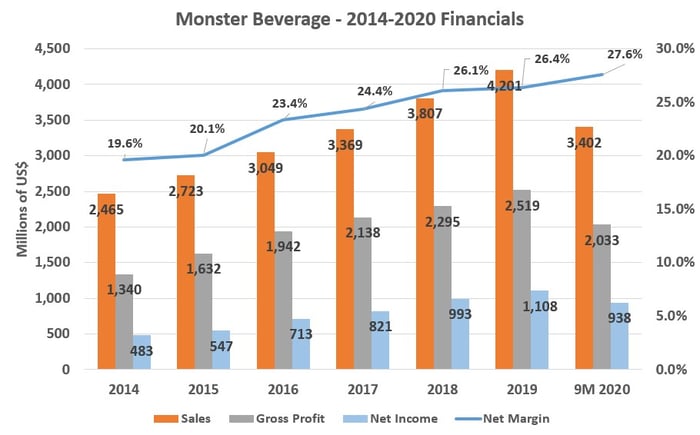 The above chart shows the steady increase in Monster's sales since 2014, and it even managed to grow sales by 10% year over year during its latest quarter. What's even more impressive is that net income has climbed faster than revenue. Monster's net margin was just 19.6% back in 2014, but it increased that to 27.6% for the first nine months of 2020.

Monster is seeing an impact from coronavirus lockdowns, but says things are improving. In the Nov. 5 conference call, CEO Rodney Sacks said that second-quarter sales "were initially adversely affected as a result of a decrease in foot traffic in the convenience and gas channel, which is our largest channel, but improved sequentially from the latter half of the 2020 second quarter and throughout the 2020 third quarter. Now e-commerce, club store, mass merchandiser, and grocery-related business continued to increase in the quarter, while our food service on-premise business, which is a small channel for the company, remained challenged. "

The company launched new Monster brand and Reign Total Body Fuel energy drinks in various markets during the quarter and in October, proving that, as much as possible, it's business as usual for the company despite the ongoing health crisis. Reign Total Body Fuel Lilikoi Lychee was launched in the U.S. in August, Monster Ultra Paradise was launched in Malta in September, and Monster Mule was introduced in Germany, Sweden, and South Africa in September. I'm impressed with these moves to keep the company on track for growth.

Monster does not stick to just pure energy drinks alone, but has branched out into other drink categories that contain its signature energy blend. Some examples are Espresso Monster Mocha launched in Hungary, which contains coffee, Monster Energy Green Tea launched in China in May, and Juice Monster Mango Loco, which was launched in Africa and contains real juice. The wide array of beverages helps the company to target different consumer segments for multiyear growth.

These two companies both have long track records of growth as well as long runways for even more growth. Their resilience during this pandemic, along with their commitment to explore multiple streams of revenue, make them suitable for investors to own forever.