No doubt, the "reopening" trade has done phenomenally well over the past month. These stocks include the airlines, travel stocks, financials, and advertising-dependent businesses that would benefit from a return to normal business operations. Yet perhaps no companies were more relieved at the positive COVID-19 vaccine news than cruise line companies.

The smallest major publicly traded cruise line, and thus one with perhaps the best growth and recovery prospects, is Norwegian Cruise Line Holdings (NYSE:NCLH). But after stunning 42.4% gains just in the month of November, is all the good recovery news already priced into the stock? 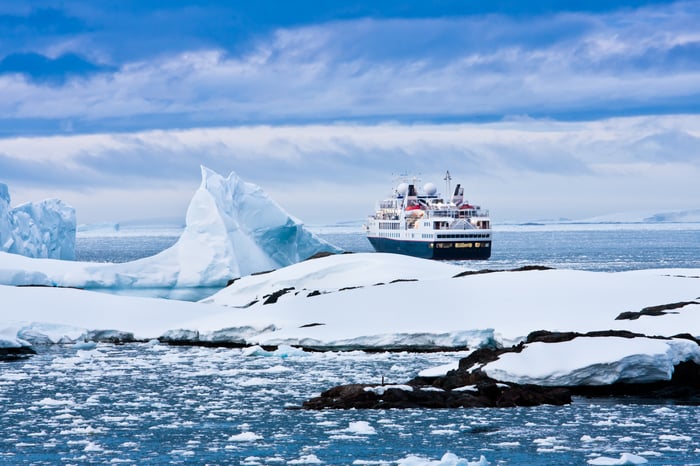 How to value Norwegian

Since March, Norwegian and other cruise lines have been burning through cash to the tune of hundreds of millions of dollars every month. In a recent press release, the company disclosed it would be burning about $175 million per month in the fourth quarter and $160 million over the second half, with the discrepancy due to the timing of interest payments.

Norwegian had about $2.4 billion of cash on its balance sheet as of last quarter, and just raised another $800 million or so in a recent equity raise (more on that later), so it should have plenty of cash to make it until a vaccine is distributed by mid-2021.

Investors are thus looking through the next few months and picturing how the company might look when things get back to "normal." In both 2018 and 2019, Norwegian brought in about $1.2 billion in operating income, so it's a fair assumption that the company could get back to those levels, perhaps in 2022.

Of course, Norwegian's balance sheet, interest expense, and share count will be wildly different at that time. As COVID-19 has taken its toll on travel, Norwegian has had to issue billions in debt at sky-high interest rates, as well as issue new shares at low prices to raise cash for the no-sail period imposed by the Centers for Disease Control and Prevention. So, prospective investors need to figure out how all of that will affect earnings per share into the future.

Additionally, Norwegian has issued lots of new shares and convertible stock during this same period. At the end of the third quarter, the company had about 275.6 million shares outstanding. However, Norwegian just issued 40 million new shares in November, and if its convertible notes are all converted to equity, it would add another roughly 120 million more shares down the road.

In total, that would increase Norwegian's share count to about 435.6 million shares, about double the amount Norwegian had this time last year.

Looking at the big picture, Norwegian looks as if it could earn about $1.80 per share once it gets back to full strength. Considering that Norwegian typically traded at a low-teens P/E ratio prior to COVID-19, it appears that today's price around $23.68 as of this writing is already pricing in the full recovery. Despite trading well below pre-COVID-19 highs, Norwegian may not be the value stock many consider it to be.