A pullback to end a huge month was probably inevitable.

It's always hard to come back to work after a long weekend, and Wall Street seemed to have the same sort of post-Thanksgiving malaise that many workers faced on Monday morning. Even though markets have fared extremely well during the month of November, they don't look like they're likely to carry that positive momentum forward into the final month of the year.

Yet even as most of the market went through a rough ride on Monday morning, a couple of major deals got a lot of attention. A merger involving S&P Global ( SPGI -1.12% ) and IHS Markit ( INFO -1.21% ) produced gains for both companies, as did the debut of SPAC-inspired QuantumScape (NYSE: QS) on the public stock markets.

It isn't every day that a stock-based merger involving two major companies leads share prices for both stocks higher. However, that's what happened with S&P Global and IHS Markit on Monday morning, with IHS Markit climbing 8% and S&P Global settling for a 2% gain. 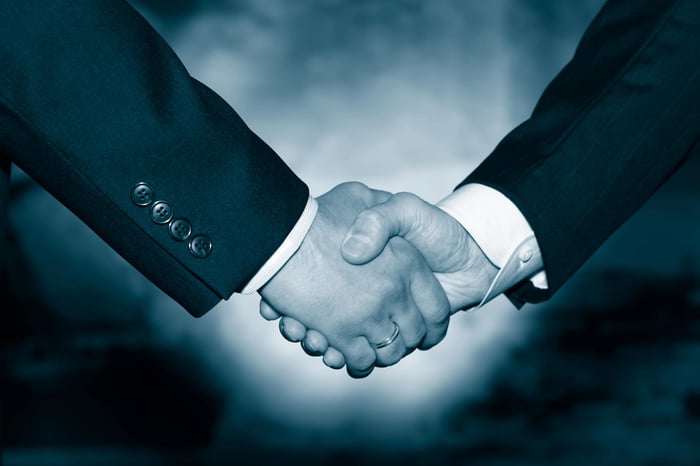 The two market information providers said that they will join forces in an all-stock transition that puts a $44 billion price tag on IHS Markit. Under the terms of the deal, IHS Markit shareholders will get 0.2838 shares of S&P Global stock for every share of IHS Markit they own. That'll leave S&P Global's current investors owning just over two-thirds of the combined company after the merger goes through.

The combination will allow the postmerger company to enjoy larger scale and a broader product mix, opening the door to some interesting growth opportunities. For the information, data science, research, and benchmark provider, the chance to offer more value to customers should help entice new clients into the combined company's fold.

In addition, S&P Global and IHS Markit expect some big financial benefits. Synergies could save $480 million annually, and with more than three-quarters of its sales coming from recurring revenue, the postmerger company should have solid growth prospects. Moreover, the all-stock deal avoids the need to raise debt, preserving strong balance sheets.

The trend toward consolidation in financial services has been ongoing for some time. This latest move ups the ante for those looking to benefit from providing vital information to financial institutions across the globe.

A quantum leap for QuantumScape

The move to go public was announced back in early September, when QuantumScape agreed to merge with Kensington Capital Acquisition in a $3.3 billion deal. QuantumScape got a lot of attention from investors because of its backers, which include global automaker Volkswagen ( VWAGY -2.54% ), Microsoft co-founder Bill Gates, and former Tesla ( TSLA -6.42% ) CTO J.B. Straubel. A shareholder vote on Nov. 25 made the deal final.

QuantumScape is just one of many companies vying for supremacy in the EV market, but its focus on battery technology could have applications well beyond electric vehicles. Many investors who've looked at Tesla argue that the underlying battery technology could be more valuable than the car business, and that view appears to be driving QuantumScape's shares higher as well.

SPAC investors have enjoyed a nice payday, given that Kensington's shares went for $10 as recently as late August. Now it's up to QuantumScape to show whether the big stock price move is sustainable.