A wild year for Walt Disney (NYSE:DIS) is now just a month away from the finish line. It's been feast or famine for the House of Mouse. Disney's theme parks and studio entertainment segments have struggled in the wake of the COVID-19 closures, but it's also had Disney+ save the day.

There are a lot of moving parts to Disney, and a lot of things will be happening as 2020 huffs and puffs to the finish line. Let's look at some of the things that investors will be watching. 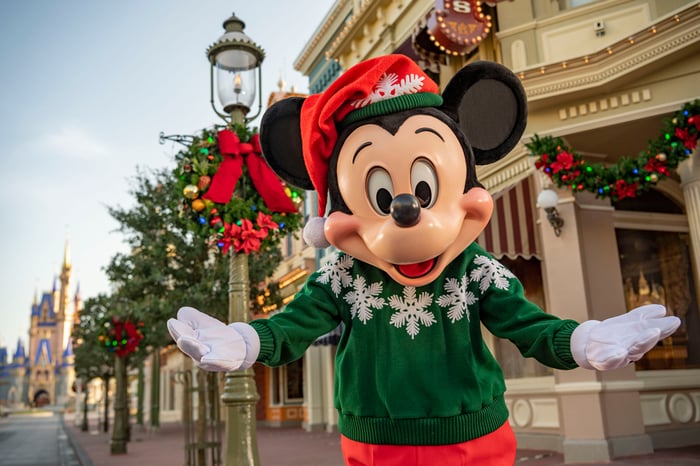 Hong Kong Disneyland is closing down again on Tuesday after a recent uptick in the COVID-19 case counts. This is the third time the resort will close down after pandemic-related shutdowns in January and July. Whether this interruption lasts for months like the first closure or weeks like the second will naturally depend on the containment of the COVID-19 crisis.

Disney owns 47% of Hong Kong Disneyland, so the interruption isn't exactly immaterial. It obviously doesn't move the needle the same way as Disney's domestic theme parks, but with the original Disneyland in California closed and the larger Disney World in Florida open with tight capacity restrictions since July, the disruption at Hong Kong Disneyland could leave a mark.

If you're a Disney+ subscriber -- and there are at least 73.7 million of you out there worldwide -- Friday is when you can start streaming the live-action reboot of Mulan. Disney pulled the film from movie theaters this summer, choosing instead to offer it as a premium-priced streaming purchase. Disney+ subscribers who paid an extra $30 were able to stream the new film from home on Sept. 4. Three months later, it will become available to all Disney+ subscribers at no additional cost.

Disney chose a much higher price point for Mulan than what rivals were charging for their consumer-direct offerings. It will be interesting to see what Disney does with its 2021 slate of theatrical releases if it decides that movie theaters are still not a viable outlet for its new films.

The eighth and final episode of the second season of The Mandalorian airs on Dec. 18. Disney+ has taken an old-school approach by releasing episodes in weekly installments, eating away at the binge mentality of the leading premium streaming service that prefers to push out an entire season on the same day.

It was natural to wonder if the media giant could keep the buzz going for the show that was undeniably the streaming sensation of last year's holiday season. Disney has been able to raise the stakes with a few meaty revelations, but you won't hear any spoilers from me.

Disney has largely avoided tapping the multiplex as a distributor for its studio entertainment since the industry started to welcome guests over the summer. The numbers just aren't there to justify releases, and that's a pretty big deal for exhibitors since Disney put out the six highest grossing movies in the country last year.

Pixar's Soul became the last of the major planned theatrical releases for 2020 to get pulled. It was expected to hit movie theaters just before Thanksgiving, but Disney decided to simply release it on Disney+ on Christmas Day. It will not have a three-month window for premium access like we saw with Mulan earlier this year.

The biggest surprise through all of this is that Disney stock is actually trading higher through the first 11 months of 2020. We're talking about just a 3% gain this year as we head into the final month -- losing to the market -- but a positive return is impressive for a company that has posted back-to-back quarters of double-digit declines in revenue and a rare quarterly loss last time out.

Dec. 31 is the final trading day of 2020. Will the media stock bellwether manage to keep its head above water long enough to post a positive return for the year?

"Just keep swimming," is the singsong motto of Finding Nemo's Dory. Disney will just have to keep swimming to the finish line of 2020 to see if it can hold on to its year-to-date gains.