There's a maxim in business that it's best to underpromise and overdeliver. The idea is that it's always better to deliver a pleasant surprise than an unpleasant one. But this isn't a maxim that Novavax (NASDAQ:NVAX) seems to be following.

On Monday, the biotech announced another delay in the initiation of a U.S. late-stage study evaluating COVID-19 vaccine candidate NVX-CoV2373. Should investors be worried? 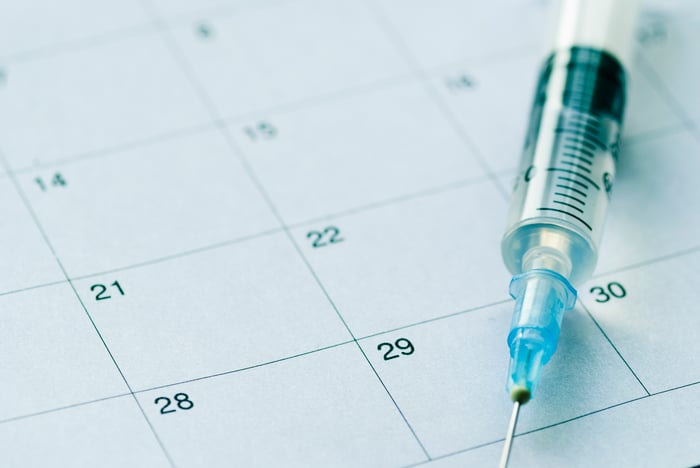 Slipping into the future

Novavax initially expected to begin its U.S. phase 3 study of NVX-CoV2373 in October. However, the company didn't hit that target because of issues in scaling up its manufacturing of the experimental COVID-19 vaccine.

For the last month, Novavax has stated that it would initiate the U.S. phase 3 clinical trial by the end of November. However, the month ended instead with the announcement of a further delay.

The biotech stated on Monday that it now expects a pivotal late-stage study of NVX-CoV2373 in the U.S. and Mexico "to begin in the coming weeks." In the press release, Novavax said that it "has been working closely with the FDA to complete trial-initiation gating activities related to its commercial-scale production" at a North Carolina facility operated by Fujifilm subsidiary Fujifilm Diosynth Biotechnologies.

Investors would have a legitimate reason to worry if NVX-CoV2373 had been placed on clinical hold by the FDA because of potential safety concerns. But is this latest delay in the start of late-stage testing a major cause for concern? I don't think so.

It doesn't appear that most investors are alarmed at this point, either. While Novavax's shares initially fell after the company's announcement, the market promptly shifted its viewpoint and the stock jumped significantly higher. As of 3 p.m. Monday, Novavax was up by about 11.5%, even as the broader market declined fractionally.

Manufacturing scale-up issues appear to be taking longer to resolve than anticipated. However, the important thing is that these kinds of issues can be and will be resolved. Each party involved -- Novavax, Fujifilm Diosynth, and even the FDA -- wants that to happen as quickly as possible.

Aside from the manufacturing-related hold-up, Novavax seems to be in a good position to hit the ground running with this clinical trial. The FDA has already positively reviewed preliminary blinded data for the COVID-19 vaccine candidate in older adults -- a key step needed to advance into phase 3 testing in the U.S. Novavax has also already selected more than 100 trial sites in the U.S. and in Mexico, with some alternate sites identified in case they're needed.

Big news on the way

Novavax will have some really big news on the way soon regardless of how long it takes to begin its U.S. late-stage study of NVX-CoV2373. The company expects to announce interim results from its U.K. late-stage study as soon as early in the first quarter of 2021.

How big of a catalyst might these results be for the biotech stock? Novavax anticipates that the data will serve as the basis for regulatory filings in the U.K., the European Union, and elsewhere. The company signed a deal with the U.K. to supply it with 60 million doses of NVX-CoV2373. Although the financial terms of this agreement weren't disclosed, it seems likely that Novavax could be set to receive well over $1 billion if its vaccine proves to be safe and effective.

Novavax also has supply deals with Australia and Canada for a combined total of 106 million doses of NVX-CoV2373. Excluding the company's $1.6 billion in funding from Operation Warp Speed, which came with an agreement to supply the U.S. with 100 million doses of its COVID-19 vaccine, Novavax probably stands to make more than $3 billion right out of the gate if NVX-CoV2373 is safe and effective.

That's a lot of money for a company with a market cap of less than $10 billion. The soon-to-come U.K. results will be tremendously important for the biotech's future.