For the first time in many months, paying passengers will look out over the deep blue waters of the South China Sea from the deck of a Royal Caribbean (NYSE:RCL) cruise ship. The cruise line announced recently it is preparing to launch its first short voyage since COVID-19 scuttled cruise schedules around the globe early in 2020. The cruise is launching from Singapore and is booked exclusively for residents of the Asian city-state, but is an important test for a whole series of brief cruises Royal Caribbean hopes to operate in the coming months.

Capacities of less than 50% of available passenger space and a lack of port stops are designed to limit the possibility of coronavirus exposure. All passengers and crew must undergo COVID-19 testing prior to boarding, and hospital-tier sanitation, including electrostatic fogging, will be used frequently to keep the ship's surfaces as pristine and germ-free as possible. 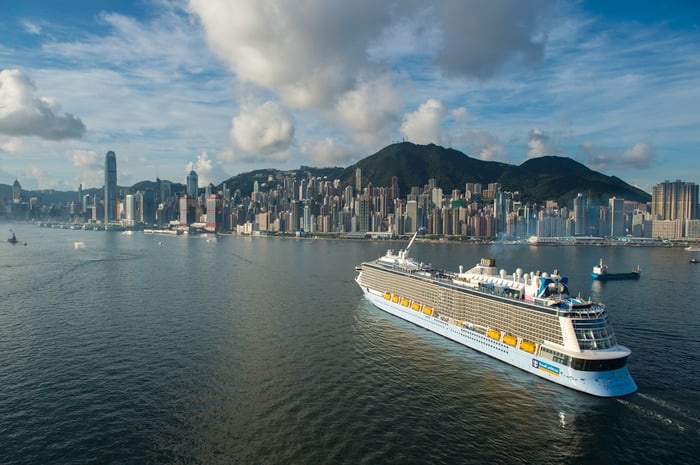 The so-called "ocean getaway" is intended, if successful, to be the bellwether of a whole series of similar brief cruises with no additional port stops. These mini-cruises are paid, unlike the free "test cruises" the company began to its CocoCay private island, which attracted nearly 100,000 volunteer offers from cruising enthusiasts several weeks ago.

Like other cruise lines, Royal Caribbean has been squeezed between lack of incoming revenue and the massive expenses of maintaining an idle fleet of gigantic cruise ships in a state of good repair for months while awaiting better sailing conditions. Royal Caribbean has burned through billions during the no-sail period but has buttressed its liquidity by issuing stock and drawing down revolving credit, among other measures.

The Singapore cruise is taking place aboard the Quantum of the Seas, a vessel with plenty of restaurant and entertainment facilities to keep passengers busy.