Though still struggling with COVID-19 pandemic fallout, Royal Caribbean (NYSE:RCL) showed today it's still looking to the future with the first launch of its new, immense Odyssey of the Seas cruise vessel. Under construction in Papenburg, Germany, the ship floated for the first time as its builders transferred it between docks, marking a crucial milestone in the ocean liner's lengthy construction process, the Orlando Sentinel reports.

The Odyssey is finally back on course to take passengers on forays across ocean waters next year. The ship will sail from Rome, Italy, for the first time in April 2021, but will begin operating from its planned permanent homeport, Port Everglades at Fort Lauderdale in Florida, in November 2021. It was originally billed to start sailing from Port Everglades in November 2020. 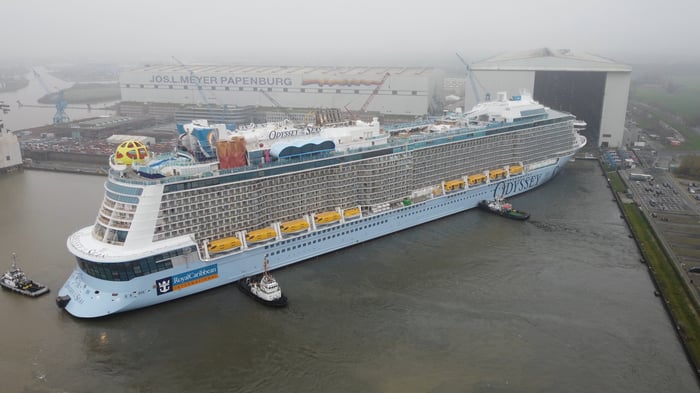 The ship's first "float" was a seven-hour transfer to the outfitting dock where its equipment and other fixtures will be added prior to its first ocean trials, according to Seatrade Cruise News. The vessel, 1,139 feet long and able to hold approximately 5,000 passengers at full capacity (much less with COVID-19 social distancing measures in place), will include a number of attractions to differentiate it from the competition. World of Cruising reports these will include a two-level pool deck, onboard bumper cars, a laser tag area, video-gaming areas, movie theaters, and restaurants.

Royal Caribbean also launched its first short "ocean getaway" from Singapore today as it tries to reintroduce paid cruising after a revenue drought lasting most of the year. The Centers for Disease Control and Prevention (CDC) increased its risk assessment for cruises a week ago, but Royal Caribbean appears to be battened down for the long haul with good liquidity and a positive longer-term plan.