Shares of Kohl's (NYSE:KSS) were moving higher today after the department-store chain announced a new strategic partnership with Sephora, a division of Louis Vuitton Moet Hennessy and the largest specialty beauty retailer in the world. As a result, Kohl's stock was up 15.1% as of 11:17 a.m. EST.

The companies said that the new partnership, "Sephora at Kohl's," would include 2,500 square-foot Sephora shops prominently located at the front of Kohl's stores. Sephora plans to open 200 of these stores in the fall of 2021, which will expand to at least 850 locations by 2023. There will also be a digital component to the partnership. Next fall, the Kohls.com online beauty selection will convert to be exclusively Sephora merchandise. 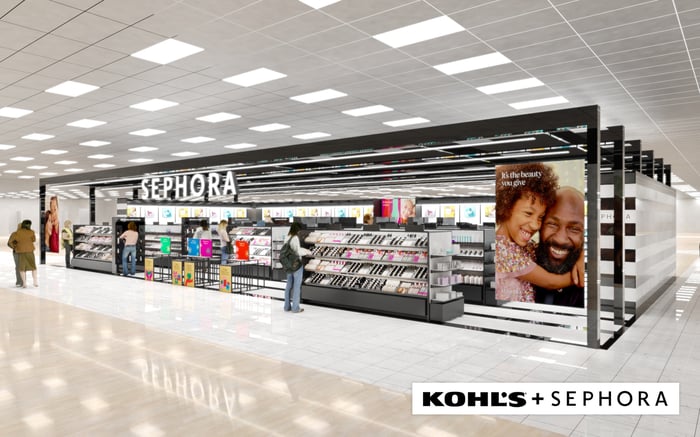 Kohl's CEO Michelle Gass said, "The Kohl's and Sephora partnership will bring a transformational, elevated beauty experience to Kohl's from the top global name in beauty," and added, "Today's announcement is a perfect illustration of the bold moves we are making at Kohl's to accelerate our growth and reimagine our future for the next era of retail."

Sephora also has a partnership with J.C. Penney, which has been a boon for the ailing department-store chain, but the status of that arrangement is unclear following Penney's earlier bankruptcy, a plan for it close more than 200 stores, and a buyout by mall operators Simon Property Group and Brookfield Asset Management. With Penney's shrinking footprint, it's not a surprise that Sephora is looking for a new retail partner.

With Penney, Sephora demonstrated an ability to drive traffic, and investors are clearly expecting a similar benefit for Kohl's.

Kohl's strategy increasingly appears to be tying itself to other brands in order to drive traffic to its stores. The company controversially partnered with Amazon, and all of its stores now accept Amazon returns. It also teamed up with discount supermarket operator Aldi to sublease excess space in a pilot program at a handful of Kohl's stores.

Of all of these deals, the one with Sephora seems like the smartest and mirrors a similar tie-up between Target and Ulta. Sephora is a popular prestige brand and a proven traffic driver. The deal itself, while a winner, doesn't seem to warrant a 15% pop in the share price but could be a sign of better things to come for the department-store stock.