Please ensure Javascript is enabled for purposes of website accessibility
Free Article Join Over 1 Million Premium Members And Get More In-Depth Stock Guidance and Research
By Rhian Hunt - Dec 2, 2020 at 7:37AM

The recently popular beverage company has a lot of priced-in growth still to live up to.

A relatively small but plucky contender in the beverage market, Celsius Holdings ( CELH -3.35% ), has enjoyed red-hot growth since early May, when its share price started climbing before rocketing up at the start of August following a positive earnings report.

Making a real splash in a market usually dominated by established giants like Monster Beverage ( MNST -3.54% ), Celsius has slurped up stock market gains, putting its shares at a multiple of approximately 5 times revenue and 100 times its current profits.

Investors seem to continue finding this consumer discretionary stock refreshing. The question remains whether Celsius can grow into its optimistic stock valuation and then keep climbing, or if its gains are all fizz and no substance.

A look at Celsius' meteoric rise

Celsius' focus on fitness and energy drinks places it squarely in the fastest-growing, most profitable sector of the beverage market. In just six years since 2014, energy drinks have exploded approximately 50.5% from $9.3 billion to $14 billion annually. Market research firm Mintel Group expects sales to rise another 37.1% to $19.2 billion by 2024.

Celsius has existed for 16 years, and its stock price remained below $6 per share for most of its history, until May 2020. Since then, its price has spiked upward twice following its second- and third-quarter earnings reports. Now, it is trading at more than $34, representing an approximately 467% jump in a six-month period. It has nearly reached the $40 price target that its most bullish analyst, Maxim Group, posted on Nov. 15, and is trading above the Wall Street consensus $30.10 target price.

Celsius' August gains, which included a 28% one-day jump in its share value, followed its report of an 86% year-over-year rise in quarterly revenue, along with significant expansion of its distribution partnerships. The second major leap, 12% on Nov. 12, was triggered by an 80% year-over-year third-quarter revenue increase, as well as 6.75% growth in its retail footprint (to 79,000 outlets) over the previous quarter.

How Celsius measures up

Celsius is clearly valued by the market as a growth stock with plenty of room to run, but can it actually deliver on the potential being priced into its current share value by investors?

Its fruit-flavored energy drinks, which the company says contain "healthy" ingredients that are "clinically proven to boost your metabolism and help you burn body fat," use proprietary formulas. That's also true for its zero-sugar, vitamin-enriched, high-caffeine Celsius Heat performance and thermogenesis drinks.

But all the ingredients, such as green tea extract and L-citrulline, are well-known substances over which Celsius has no monopoly, and only the specific blend is proprietary, limiting the company's ability to differentiate itself from competitors on ingredients only.

In order to continue its upward arc of growth long term, Celsius has to remain competitive in a market where giant rivals are already operating, racking up impressive growth figures of their own. Privately held Red Bull, still riding on its nearly 40-year first-mover advantage, controls 41.7% of the energy drink market, according to IRI research, and saw its sales grow 10.1% between Sept. 5, 2019, and Sept. 5, 2020. The runner-up, Monster Beverage, holds 31% market share and generated 4.8% growth over the same period.

Next to these major players, Celsius appears diminutive, despite its $2.45 billion market cap. Its market share was too small to be measurable in 2018, rose to 0.2% in 2019, and reached 0.7% by September 2020. But even if it is competing with Goliaths, Celsius doesn't need to go head-to-head against the much larger enterprises. At this point, with sales growth in the energy drink market continuing its explosive expansion, Celsius' main goal needs to be widening its distribution network -- a strategy it is executing with focus and determination.

During the third-quarter earnings conference call, CEO John Fieldly detailed how Celsius is expanding its sales and distribution across multiple channels. It worked to boost the crucial (and largely pandemic-proof) e-commerce channel, with more than 100% growth there. 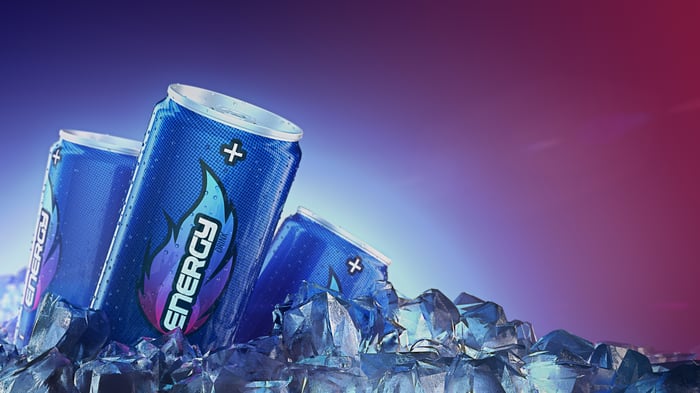 Additional channels that saw strong growth, and which Celsius is targeting in 2021, include drugstores, convenience stores, and international sales.

Rather than being forced into being a David trying to wrest market share from the established Goliaths of its industry, Celsius can bypass the giants or even enlist them as distribution partners, because of the rising tide of energy-drink market growth. Its scorching sales growth suggests it can more than hold its own against other small, health-oriented competitors, while Monster and Red Bull continue profiting from more-traditional formulas and have little motivation to muscle in on Celsius.

Is Celsius a buy?

Long term, investor confidence in Celsius' ability to grow far beyond its current level will likely be vindicated, but some short-term downward corrections are possible in the meantime. Those who already have Celsius in their portfolio may want to hold some of their stock and sell some of it to await a dip in share price that creates a good reentry point. Or they can simply hold, depending on their tolerance for risk.

Similarly, those thinking of buying the stock for the first time may want to do so now before it climbs higher. The alternative would be to wait out for a possible lower entry point, however that "opportunity" may not materialize until Celsius' stock price has climbed further, making that wait "agonizing".

The one thing that seems very likely is that Celsius is indeed destined to climb. A popular product, good distribution strategy, and swiftly growing market will probably combine to drive its upward momentum to fizzier, more energizing heights.