Shares of electric-commercial-vehicle maker Workhorse Group (NASDAQ:WKHS) and a related company, electric-pickup start-up Lordstown Motors (NASDAQ:RIDE), were trading lower on Wednesday after the U.S. Postal Service (USPS) said it is delaying a major contract award for which Workhorse is a finalist.

Trucking-news site Trucks.com reported that the USPS has delayed the award of a $6 billion contract to replace its fleet of mail-delivery trucks until sometime next year. The award has been delayed several times; it was most recently expected by the end of 2020.

Workhorse is one of three contenders competing for the contract, which could involve building as many as 180,000 mail-delivery vans to replace the Postal Service's aging fleet -- and which could be split between several manufacturers. 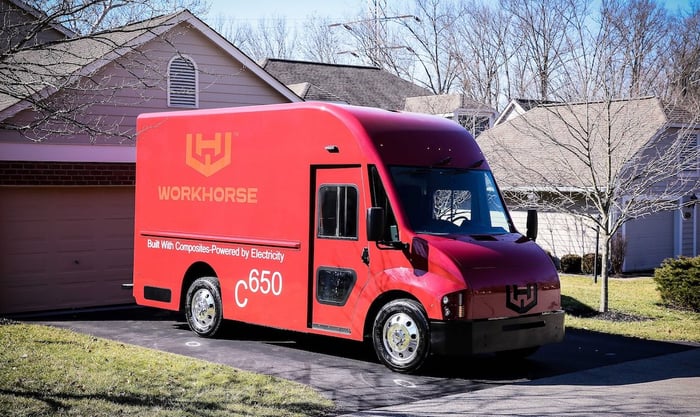 Workhorse is hoping to win a contract to build electric mail trucks that will likely be based on its C-Series commercial vans. Image source: Workhorse Group.

If Workhorse lands a contract for all or a large portion of the new fleet, it's expected to tap Lordstown to help manufacture the vehicles. (Workhorse owns 10% of Lordstown, which in turn owns a large former General Motors factory in Ohio.)

Workhorse and Lordstown investors had been hoping for good news before the end of the year; the delay is why the stocks are trading lower today.

Auto investors holding Workhorse stock should be very clear about this point: It's far from certain that Workhorse will win any part of this deal.

The other contenders include Turkish electric-truck maker Karsan Otomotiv, which has teamed with Michigan-based commercial-van specialist Morgan Olson on a plug-in hybrid entry that they will build in the United States; and a joint effort from Oshkosh and Ford Motor Company that is based on Ford's popular Transit commercial van.

One more thing to keep in mind: While the USPS told Trucks.com that it now expects to award the business in the first quarter of 2021, that's not guaranteed either. With a new administration coming into the White House in January, it could be several months before the Postal Service's new leadership is ready to commit to a deal. Patience will be required here.