Bank stocks have been on a wild ride this year as the industry has attempted to cope with the challenges of both the coronavirus pandemic and an ultra-low-interest-rate environment, among other headwinds. Most banks' market caps dropped significantly below their tangible book values earlier this year, but have since rebounded back to more normal levels.

I recently had the privilege of speaking with Bruce Van Saun, the chairman and CEO of Citizens Financial Group (NYSE:CFG), a nearly $180 billion asset bank based in Providence, Rhode Island. Here are some of the key takeaways from that conversation. 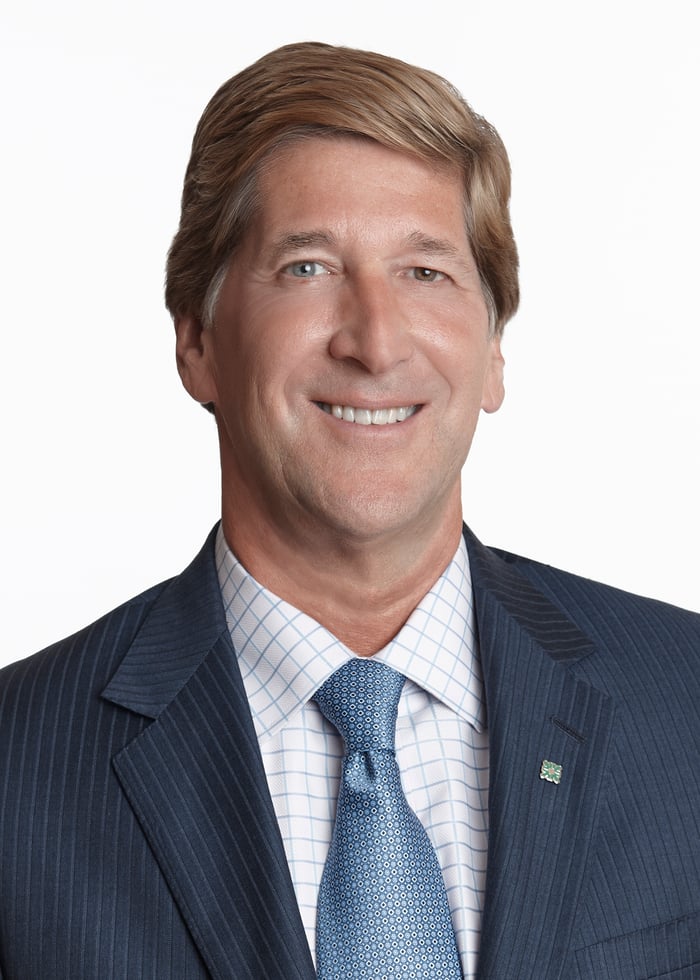 On the outlook for the fourth quarter

On the outlook for fourth-quarter earnings, Van Saun said, "I don't think there will be any big surprises here." He thinks the economy is fundamentally on the same trend line that it was when banks held their third-quarter earnings calls in October. The ongoing surge in news coronavirus cases has been more severe than many might have anticipated, and some states and municipalities are reinstating their lockdowns, but there has also been some excellent news regarding COVID-19 vaccines.

Van Saun thinks most banks likely did their last bit of significant reserve building for anticipated loan losses in the third quarter, and he expects some institutions will release some of those reserves back into earnings in the fourth quarter. He also thinks the impact from the Fed cutting interest rates in March will likely be less dramatic on banks' net interest margins in the fourth quarter. Lastly, Van Saun said fee businesses such as capital markets and mortgage refinancing should continue to be healthy. So, all in all, it looks like the fourth quarter is shaping up to be as good, if not better, than the third.

On economic stimulus and the outlook for 2021

Banks have not been factoring the potential impact of another federal economic stimulus package into their modeling and projections, so Van Saun believes that any such bill passed before year's end would boost the credit outlook. But he was not optimistic about Congress acting before the inauguration. However, if a second round of emergency stimulus does pass, Van Saun believes it could ultimately result in banks taking lower loan losses than they're currently projecting. The important thing to watch, he said, will be how any stimulus is distributed, and whom it targets.

Looking at the environment for 2021, Van Saun said banks will be watching their expenses very carefully, especially with loan margins shrinking to record lows because of low-interest rates. Credit costs will likely be lower, which is a plus. But the problem will be determining what to do after the positive factors of 2020 for the industry, such as strong mortgage refinancing activity, begin to level off. Van Saun said banks will likely need to find some smart loan growth. And outside of residential mortgages, that has been very hard to come by in recent months.

Most experts expect to see a big uptick in bank mergers and acquisitions following the pandemic, and Van Saun doesn't disagree. He views the smaller regional and community banks as prime targets, given the pressures they are facing and the industry's transition to a more digital business model.

While he initially thought the consolidation wave wouldn't begin in earnest until the second half of 2021, Van Saun now expects more deals will happen in the first half of the year. For one thing, banks' valuations have recovered from their steep discounts to levels closer to what targets would be willing to sell themselves for. For another, Van Saun points to the recent deals between First Citizens BancShares and CIT, and PNC and BBVA, as evidence that M&A activity may already be picking up.

"Typically, if you are in a recessionary period and you haven't seen peak charge-offs [write-downs of debts unlikely to be collected], you would see banks often wait, because they don't want to expose themselves to credit issues," he said. But by going ahead with these deals, Van Saun said, PNC and First Citizens showed they had the confidence to do the due diligence on an acquisition target's loan book during the pandemic, and that the credit outlook may be turning the corner.

On the coming Biden administration

The pending transition from President Donald Trump to President-elect Joe Biden has left many investors wondering how the new administration will impact the banking sector. Van Saun said he could see the new administration putting more focus on three areas: consumer protection; scrutinizing large banks' M&A activity; and pressing for higher standards when it comes to diversity, inclusion, and equality. But overall, he doesn't expect to see big changes in regulation.

"The reform agenda coming out of the Great Recession was very effective from a prudential standpoint and from a customer standpoint," he said.