The bad news is, smartphone sales slumped again last quarter. The good news is, Samsung (OTC: SSNLF) not only used this year's turmoil to gain market share, but it grew its total unit shipments on a year-over-year basis.

That's the word from technology market research outfit Gartner anyway, as detailed in its third-quarter review of the global smartphone market. A much smaller Xiaomi (OTC:XIACF) gained much more market share on a sizable increase in units shipped, though its bar was set lower. Apple (NASDAQ:AAPL) essentially held its ground, while Huawei -- a major disruptor of the smartphone landscape just a few quarters ago -- lost quite a bit of ground. Oppo remains the least relevant of the five biggest names in the smartphone business, and, like Apple, mostly held its ground last quarter.

The big story buried in this data, however, really is Samsung. The lost market share it was starting to claw back before the coronavirus pandemic rattled the world is being rewon, with its third-quarter unit shipments reaching their highest levels since the third quarter of 2017.

It was a much-needed win. 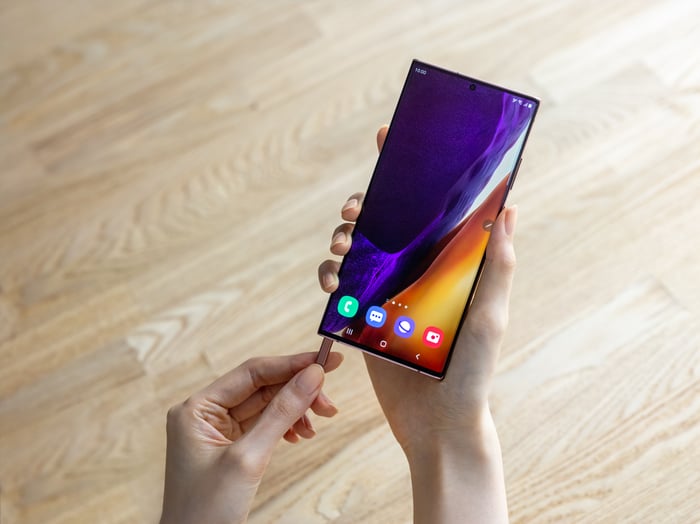 If you're curious (and you should be), mobile phones account for about 45% of Samsung's annual revenue and, on average, roughly a fourth of its operating profits. Mobility is its single biggest business.

Translation: Strength on the smartphone front can meaningfully move the fiscal needle for this company.

That's what makes the graphic below such an encouraging one. Samsung seems to be coming out of the COVID-19 shutdown lull in even better shape than it entered it. 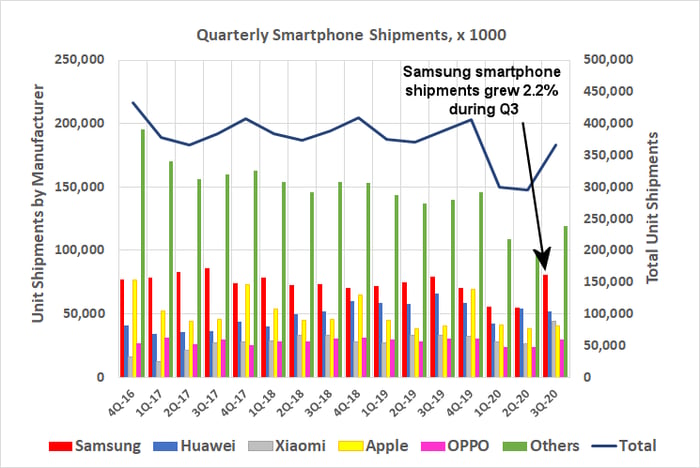 The company is certainly restoring production and deliveries faster than any other brand, save the aforementioned (and much smaller) Xiaomi. Xiaomi's biggest and best market is India, though, where its lower-end and mid-priced phones are far more marketable than Samsung's higher-priced alternatives. Indeed, IDC says Xiaomi's shipments to India alone last quarter reached 13.5 million units, up 7.1% year over year, making up around 30% of Gartner's estimated Q3 shipments for the company. IDC further suggests that Xiaomi delivered around 11 million units -- around a fourth of Gartner's estimated unit shipments -- to China last quarter, where Samsung isn't a contender.

Samsung's reach and market share, meanwhile, are rematerializing in other global markets that support higher prices, such as the United States and Europe.

That's important. Higher-priced phones tend to be higher-margin phones. That's why the next graphic is even more compelling than the prior one. Not only is Samsung regaining market share, it's more likely than not regaining more profitable market share. 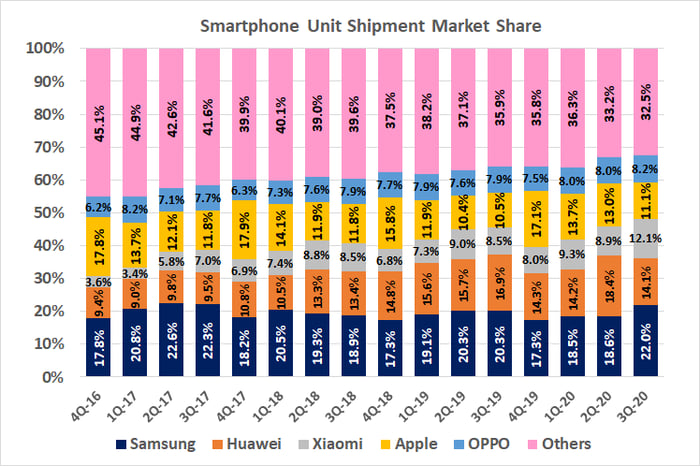 A revolution that plays right into Samsung's hand

One good quarter doesn't necessarily make a new trend. But all trends start out with that first quarter in which a pivot is made.

Investors would be wise to consider the circumstances -- the pandemic is making it tough to judge the sustainability of anything we're seeing that looks different than it did before. Still, it's a potential shift investors would be wise to keep on their radars, searching for more clues that confirm this budding trend. For a while, it appeared Samsung was struggling to find its place, trapped between consumer demand for ultra-premium smartphones like Apple's iPhone, and demand for value-priced devices like those offered by Xiaomi and Huawei (including in the U.S.). Now the data is starting to say there's a healthy enough market for Samsung's mid-priced and upper-mid devices after all.

To this end, IDC's research director Nabila Popal commented earlier this year: "In the long term, IDC expects the fastest growth will be in the $400-$600 price band as 5G sales grow and the average selling price (ASP) for 5G phones drops to $465 in 2024." Samsung certainly sells higher-priced phones, but it's got plenty to offer in that range.