The U.S. stock market has risen to new heights this year, rebounding nicely from the steep plunge it took in late winter as the coronavirus crisis surged into a pandemic.

Investors may feel good about their returns, but analysts point out that the market is now overvalued. The price-to-earnings (P/E) ratio of the S&P 500 is hovering above 41 currently, compared to 24 a year ago, and earnings of the companies in the index are expected to drop by more than 15% in 2020.

Not surprisingly, finding fast-growing companies that are trading at reasonable valuations is a challenge under such circumstances. But Logitech International (NASDAQ:LOGI) and Applied Materials (NASDAQ:AMAT) fit that description, even after rallying impressively in the past few months. And both tech companies still have a lot of room for growth, making them ideal bets for investors looking for a mix of both value and growth. 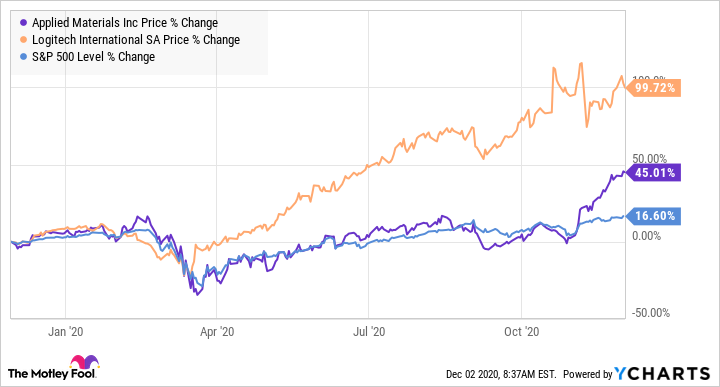 The COVID-19 crisis has been a huge tailwind for Logitech International. Demand for the computer peripherals it makes has surged as people gear up with what they require in order to work, attend school, and remain entertained from home.

In the company's fiscal 2021 second quarter, which ended on Sept. 30, its revenue shot up 73% year over year in constant currency terms to $1.26 billion. Its adjusted earnings jumped an even more impressive 274% to $1.87 per share. In addition, Logitech raised its outlook: It now anticipates revenue growth between 35% and 40% for the fiscal year in constant currency terms, as compared to its earlier forecast of just 10% to 13% sales growth.

Despite all this, Logitech sports a P/E ratio of just 22 as compared to its five-year average ratio of 27. This makes the stock an attractive bet right now, considering that the company is expected to sustain its impressive earnings growth momentum over the long run, according to analyst estimates.

That's not a surprising view, as Logitech stands to benefit from a number of growth trends. For instance, the video gaming segment that supplies nearly a quarter of its revenue stands to gain thanks to the recently launched PlayStation 5 and the Xbox Series X consoles. Newzoo estimates that the gaming peripheral market could be worth $5.13 billion in 2022 as compared to $4.14 billion last year.

The debuts of new graphics cards from AMD and NVIDIA could provide it with another tailwind. The two chipmakers have raised their graphics cards' performance metrics by big margins, which could drive sales of new hardware and in turn boost the growth of Logitech's gaming business.

Meanwhile, sales of Logitech's non-gaming PC peripherals (keyboards, web cameras, and pointing devices) and videoconferencing products could also keep growing at a nice pace thanks to the increasing tilt toward a remote-working culture. The company gets nearly 57% of its revenue from these segments, which have expanded amid the pandemic.

Given that many companies are considering allowing their employees to work remotely permanently, even after the COVID-19 crisis recedes, or are planning to allow them to work from home more often, Logitech has reason to cheer. In all, the tailwinds for Logitech's business that the pandemic has generated appear to be here to stay. Those should allow the company to keep clocking impressive growth, and pave the way for this attractively valued stock to rise further.

After a shaky start to the year, Applied Materials has stepped on the gas, and things are due to improve for the company in 2021 as semiconductor demand in various end markets picks up.

The company recently reported its fiscal 2020 results and delivered 18% revenue growth. Net income shot up 34% thanks to improved margins. In fact, Applied Materials switched into a higher gear in 2020 despite the pandemic, as is evident from the charts below. 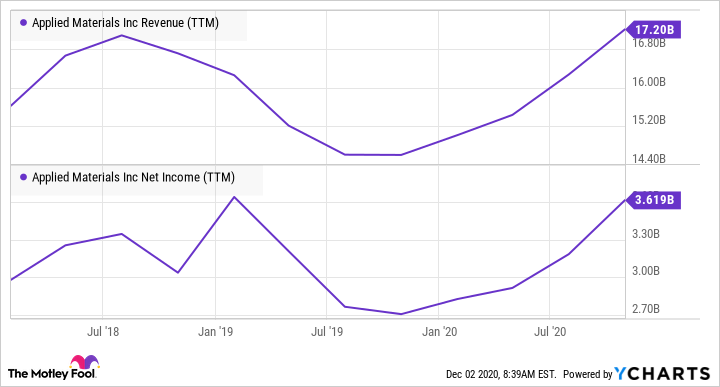 However, the stock continues to trade at an attractive valuation. Its P/E ratio of 21 is identical to its average multiple in 2019, while its forward P/E of just under 17 points toward stronger bottom-line performances ahead.

The company's guidance for the current quarter suggests that it is about to begin the new fiscal year on a high. The forecast is for 19% year-over-year revenue growth and an increase of almost 30% in earnings. More importantly, it won't be surprising to see Applied Materials consistently deliver high earnings growth rates in the future as demand for semiconductor manufacturing equipment that it sells is expected to increase.

This bodes well for Applied Materials, as the semiconductor systems business provided just over 66% of its fiscal 2019 revenue. Additionally, the increase in semiconductor demand is likely to persist beyond 2021 thanks to the automotive, industrial, and communication markets.

According to Deloitte, semiconductor sales could rise by 5.5% in 2021 as more technology is deployed in vehicles. Similarly, increasing automation is expected to boost the use of semiconductors in the industrial space. Meanwhile, artificial intelligence, the Internet of Things, and 5G wireless are all expected to drive rising demand for more chips and increase Applied Materials' addressable market.

As such, Applied Materials could remain a top growth stock for the long run, especially considering its current reasonable valuation.