2020 has seen an acceleration of many digital trends, e-commerce being the poster child of this phenomenon. With stores closed, consumers have had no choice but to order online. In fact, according to data from IBM, 2020 has accelerated the shift to e-commerce by five years!

Not only have people been changing where they buy their goods, but also how they pay for those goods. The latest trend sweeping the e-commerce industry is known as "buy now, pay later," which is exactly what it sounds like. Unlike credit cards, shoppers using buy now, pay later can create payment plans for specific items, and in many cases they do not have to worry about interest expense. This is a huge win for consumers by providing yet another way to pay for goods and services.

There are a few companies pioneering buy now, pay later and many of them are public (or will be soon).

Afterpay (ASX:APT) is based in Sydney, Australia, and is fairly young, having been founded in 2015. Despite its young age, it already has a market cap exceeding $20 billion.

Afterpay grew to great heights due to its innovative product, which is virtually the default payment option in Australia when buying online. The company grants shoppers the ability to pay for purchases in four installments, each due every two weeks. Despite receiving items immediately, shoppers do not get charged any more money for their purchase in the form of a fee or interest payment, aside from late payments. If you do miss a payment, late fees are just $10, and the total fees assessed are capped -- in other words, consumers won't rack up insurmountable debts over time.

So how does Afterpay make money? By charging merchants a fee based on the size of the transaction. Merchant fees are generally around 5% of the transactions, so higher than a typical credit card processing fee, but still a good deal considering that offering Afterpay increases the volume of sales.

(Please note: If you want to buy Afterpay shares, you should do it on the Australian Securities Exchange. Its U.S. shares are too thinly traded to recommend. See if your broker allows for trading foreign stocks.) 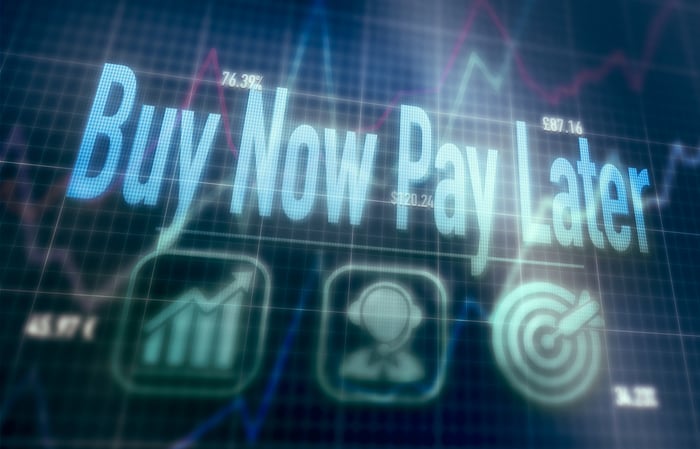 Klarna is a buy now, pay later payments company based in Stockholm, Sweden. Its product looks very similar to Afterpay: Customers pay in four installments spread over six weeks, and their goods ship as soon as the first payment is received. Also like Afterpay, customers do not pay any interest or fees except for late fees. Merchants are billed transaction fees in the form of a $0.30 base fee plus variable fees of up to 5.99% of the transaction value.

Klarna is still private but is rumored to be considering an IPO. The company is reported to have nearly 9 million customers on its platform and is growing at a rapid rate. Klarna is definitely a company worth following in the coming years.

Affirm has a slightly different strategy and actually looks a lot more like a credit card company than its peers.

Affirm offers buy now, pay later but requires customers to pay interest to finance their purchases. When a customer uses Affirm, the company does a credit check and offers financing in the form of a 0% to 30% APY. Roughly half of the people who used Affirm to make a purchase in the past year qualified for a 0% payment plan while the other half had to pay interest on their purchases. Affirm doesn't charge late fees.

For investors interested in Affirm's business, the company recently filed to go public. While it is unclear what valuation the company will receive, it could be a very interesting IPO for growth-minded investors.

Ready to take off

The buy now, pay later space represents one of the most attractive growth areas of the e-commerce ecosystem. Consumers benefit from increased flexibility for making purchases. Merchants benefit from selling more inventory. And investors benefit from the opportunity to invest in a great group of growth stocks. This should be an interesting industry to observe from all sides for many years to come.