The IPO of Coca-Cola (NYSE:KO) took place more than a century ago. The company issued 600,000 shares of publicly available stock in September 1919 at $40 per share, according to a company news release.

Coca-Cola had already evolved significantly since Atlanta pharmacist John Stith Pemberton invented the formula for the original carbonated beverage in 1886. However, few could probably imagine where Coca-Cola or its stock would go in the coming decades.

The value of Coca-Cola today

Consumers can now find Coca-Cola products in more than 200 countries. It has also become a beverage empire encompassing over 500 brands across numerous types of drinks, though it intends to reduce that number over the next few years.

Still, such a footprint means Coca-Cola stock, like most consumer staples stocks, tends not to draw as much attention as newer, higher-growth stocks. 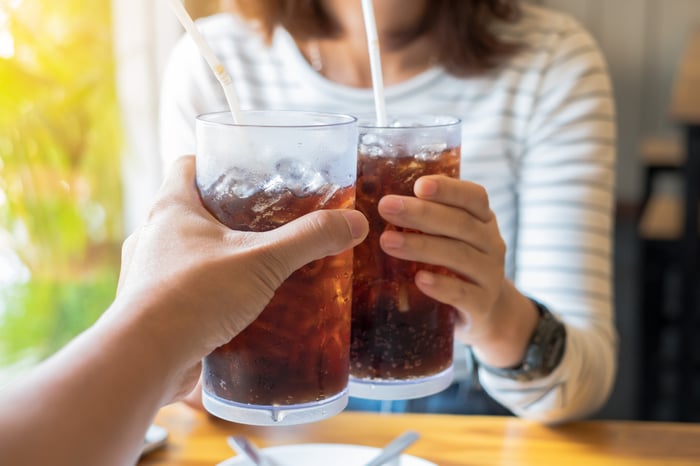 Nonetheless, for investors who imagine the time horizon for owning a stock decades out, the returns look considerably more impressive. Throughout its history, Coca-Cola has experienced 11 stock splits. So one share sold in 1919 has become 9,216 shares today.

Hence, if an ancestor of yours had purchased three shares of Coca-Cola stock for $120 at the IPO and eventually handed over the split shares to you, just those 27,648 shares would now be worth more than $1.483 million.

Today, the dividend payout stands at $1.64 per share. Multiply those 27,648 shares by the dividend and you have a yearly dividend income this past year of $45,342 to add to the share price value. At the current stock price, the dividend yields about 3.2%. To put that into perspective, the S&P 500 index average dividend yield is about 1.6%.

Though that yield sounds compelling for a new investor, the bulk of the benefit has accrued to those who held the stock long term. Coca-Cola implemented its 58th consecutive annual dividend increase in February. Only a handful of stocks have a longer track record of consecutive dividend increases than Coca-Cola. These stocks, as well as Coke, are known as Dividend Kings.

Admittedly, the payout has become a significant expense for the company. The dividend claimed about $3.5 billion of the company's $5.5 billion in free cash flow in the most recent quarter.

Nonetheless, this makes the payout sustainable. More importantly, since breaking the long payout streak could undermine confidence in the stock, investors can probably expect another payout hike next year and in the years to come.

The payout, along with the overall value proposition, is what probably attracted Warren Buffett to the stock. His company, Berkshire Hathaway (NYSE:BRK.A) (NYSE:BRK.B), made its first purchase of Coca-Cola stock in 1988.

Buffett would go on to invest about $1.3 billion in Coca-Cola. The company now holds 400 million shares, or 9.3% of Coca-Cola's stock. That stake is worth approximately $20.6 billion today.

The stock has only risen by just over 60% over the last 10 years, significantly underperforming the S&P 500. Nonetheless, Buffett is probably happy with Coca-Cola's performance in one critical respect. 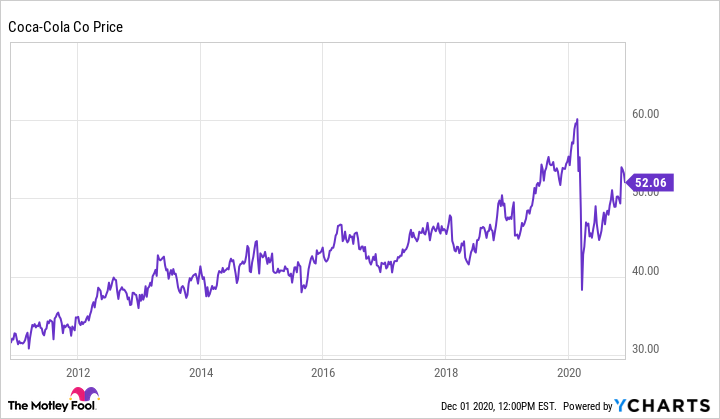 This year, his 400 million shares generated $656 million in dividends. This is more than a 50% return on his original investment, meaning he currently receives the money back on this investment (and then some) every two years without selling a single share!

The lesson of Coca-Cola stock

Indeed, most investors do not have a 100-year investment horizon. Even if they did, they should not expect one of today's shares to split into more than 9,000 a century from now. Since Coca-Cola is now available in nearly all countries, driving growth has become a more difficult challenge.

Moreover, even if investors decide not to buy Coca-Cola stock, it offers one critical lesson. Investors like Buffett who find a solid company and hold on to that for decades could earn considerable rewards.

This is a huge incentive to ignore the day-to-day machinations of a stock. Instead, the largest rewards could come to stockholders who focus on long-term growth and quietly collect dividends.