Shares of Callaway Golf (NYSE:ELY) surged 37.3% in November, according to data from S&P Global Market Intelligence. It was quite a busy month for Callaway, which reported positive earnings early in the month, coming right on the heels of its late-October acquisition of privately owned Topgolf. That acquisition seems like a perfect bit of timing, as Topgolf should benefit from a vaccine and economic reopening.

Callaway's stock came into the month on a low point, after a late-October crash following the Topgolf merger announcement. Before the election and the recent vaccine news, it appeared Wall Street thought the $2 billion all-stock merger of equals was a bad deal, with Callaway's steady golf club business acquiring Topgolf, which had been hurt by COVID-19. 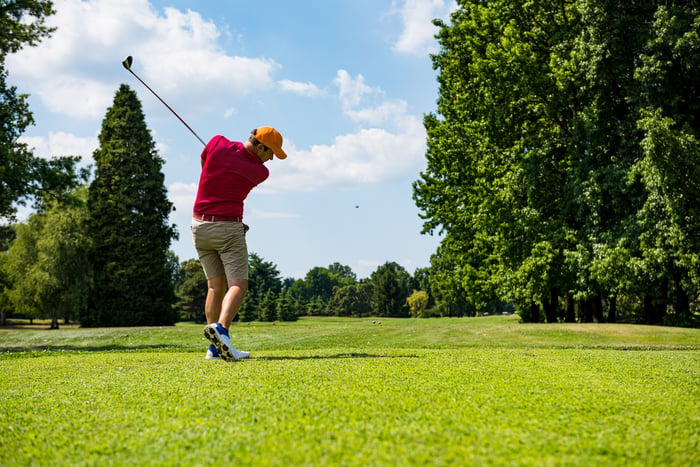 Topgolf is a large entertainment driving range complex with a restaurant and bar meant for large gatherings of casual golfers, so it has been hurt by the pandemic. And not only was Topgolf losing money, but it also came with $555 million in debt that Callaway would assume.

However, Topgolf also has very intriguing growth prospects, owning its proprietary Toptracer technology, as well as a free-to-play golf video game called World Golf Tour. Management has highlighted the potential for 200 Topgolf complexes in the U.S. and 250 internationally, up from just 58 today.

Yet after Callaway's rough 25% drop in late October, shares began a torrid run in November, following a strong earnings announcement. During the pandemic, golf is one consumer discretionary out-of-home activity that can actually be done safely. That resulted in an acceleration of golf rounds played, which were up 13.9% in June, 19.7% in July, 20.6% in August, 25.5% in September, and a whopping 32.2% in October, according to Golf Datatech.

The surge in golf led to strong results in Callaway's core golf club and apparel business. On Nov. 9, Callaway reported 11.6% revenue growth, and earnings per share nearly 50% above analyst expectations.

With the positive vaccine news, Callaway began to rocket higher off its depressed price and amid a change of heart on the part of investors around Topgolf.

Callaway's management team likely could not have timed the acquisition of Topgolf better, exchanging its own strong shares for a business that was weak during COVID-19. Looking forward, the fate of Callaway will largely rest on the shoulders on Topgolf.

Thus far, Topgolf customers have incredibly positive opinions of it, but it still has a relatively small footprint. If Topgolf retains its popularity and is able to fill up its driving range centers all over the world, the acquisition will be a home run. But if the capital-intensive Topgolf fails to fill up amid competition, Callaway's stock could cool off.