Stocks are not like sports teams. It's OK, even accepted, to jump on the bandwagon in the market, particularly if that bandwagon appears to be a long-term trend.

If you're looking at cannabis stocks, there's a simple reason to invest in Cresco Labs (OTC:CRLBF), Green Thumb Industries (OTC:GTBIF) or Trulieve Cannabis (OTC:TCNNF). All three just turned in record quarters and are turning a profit.

The last part is still a rarity among marijuana companies. However, these three companies are multistate operators with enough scale to thrive as more states open up to medical and adult-use marijuana. 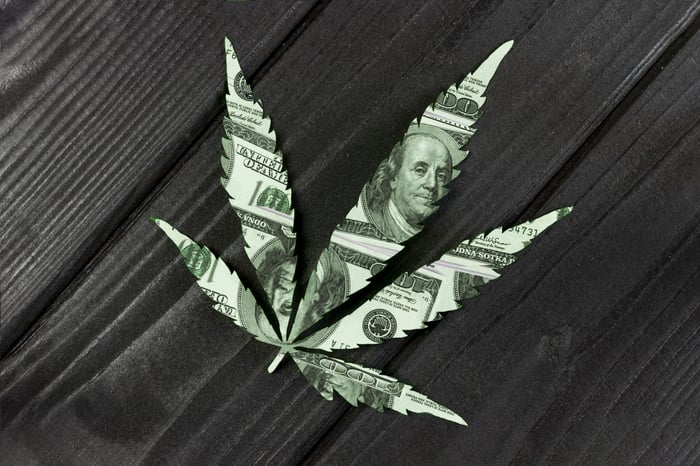 Green Thumb Industries led the trio during the third quarter, reporting $157.1 million in revenue, up 31.3% sequentially and 131% year over year. More importantly, the company listed positive net income in the quarter for the first time, reporting $9.6 million. Green Thumb also said it increased its gross margin in the quarter to 55.4%, compared to 53.2% in the second quarter.

The company is based in Chicago but operates in 12 states. It has 25 retail stores, but much of its business is connected to its brands, which include Beboe, Dogwalkers, and Dr. Solomon's. The company's branded-product gross sales were up a reported 32.6% over the prior quarter.

With all of that positive news, it is easy to see why the company's share price is up more than 120% year to date. 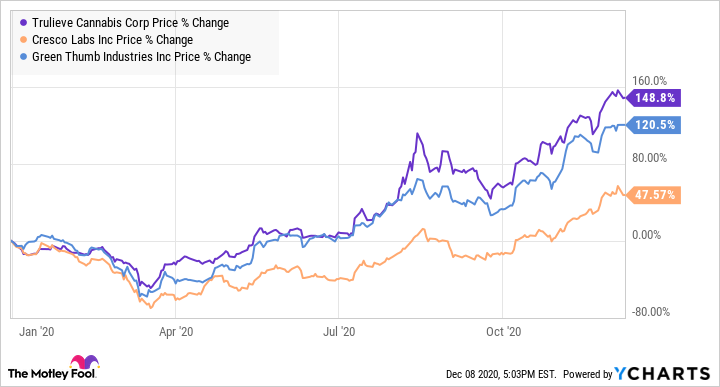 Cresco Labs' shares are up more than 47% since January. It posted $153.3 million in revenue in the third quarter, up 63% sequentially and 326% year over year. More importantly, it recorded positive net income for the first time at $4.9 million.

Cresco is also based in Chicago. It owns 19 dispensaries over nine states and its products are sold in more than 700 dispensaries in the United States. In its third-quarter earnings call, the company said it made $90 million in wholesale sales, making it the top cannabis wholesaler in the country. It has made significant wholesale sales inroads into California, the nation's largest cannabis market. In the third quarter, while California grew cannabis sales overall 21%, Cresco's own sales in the state increased 56%, the company said.

Perhaps the most impressive thing about Cresco is how it has grown adjusted earnings before interest, taxes, depreciation, and amortization (EBITDA). It listed $46.4 million of adjusted EBITDA in the quarter, up 182% sequentially and 1,403% year over year.

3. Trulieve is dominant in the Sunshine State

Trulieve just posted a record third quarter with revenue of $136.3 million, up 93% year over year, and a net income of $17.4 million. It was its 11th consecutive quarter of profitability -- a longer streak than any other cannabis company can boast. Its shares are up almost 150% year to date.

While it is primarily based in Florida, Trulieve now operates in six states with 68 stores nationwide. The company also reported third-quarter adjusted EBITDA of $65.8 million, giving it 11 consecutive quarters of EBITDA growth, and an improvement of 83% year over year.

Choosing between these three is a nice dilemma

What's happening with these cannabis companies is that their size and scale are coming into play, allowing them to achieve wider positive margins and greater profitability. After five new states opened up to adult-sales marijuana use thanks to ballot initiatives in November, there's plenty of new room for growth in the industry. All three of these companies have strong cash positions and are poised to grow in budding markets.

Trulieve is the safest bet right now because of its consistent growth in profits. Its stock has had the best rise of the three year to date, but I also think with a price-to-book (P/B) ratio of 8.84 it may be overpriced compared to Cresco Labs and Green Thumb Industries, which sport P/B ratios of 3.5 and 5.2 respectively. The question for me is how well Trulieve can build its revenue growth and whether it can maintain profit margins as it expands into other states. Keep in mind, however, the company could really take off if Florida adopts adult-use sales in the next couple of years.

The best bet, however, may be Cresco Labs. Its revenue increase is the most explosive of the three and with a P/B value ratio of 3.5 and a price-to-sales ratio of 5.3 (also the lowest of the bunch), it's the best priced of the three companies.

Green Thumb Industries has also seen explosive revenue growth and it is growing its brand expansion now, before the market becomes overly saturated. I think it is a great long-term choice, not far behind Cresco Labs.