Just a year after its new Purina pet food factory in Hartwell, Georgia started operations, Nestle (OTC:NSRGY) announced it is spending more than half a billion dollars to expand the facility. Among the planned additions are bigger warehousing spaces and the necessary infrastructure to start producing Friskies cat food there, joining the current manufacture of Fancy Feast and other brands.

Governor Brian Kemp expressed his support for the plans. It is a pleasure, he said, "to see a world-renowned company like Nestlé Purina expand their operations in the Peach State." The governor added that he is "grateful for Nestlé Purina's continued investment in Georgia." The new expansion will increase the facility's total jobs by 130 to 370 people and is expected to start operating by 2022. 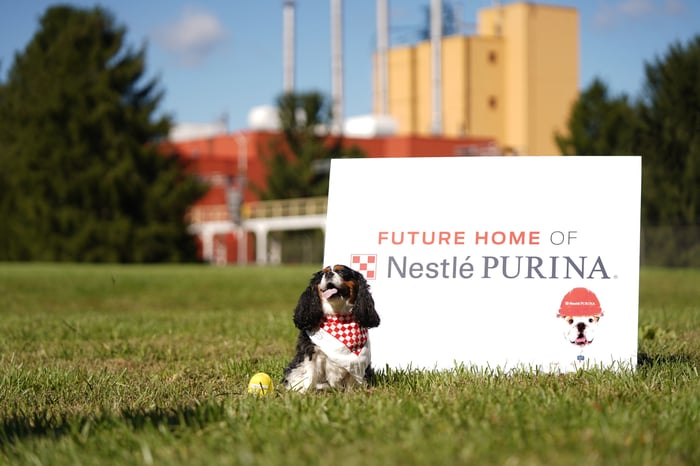 According to Star Tribune reporting, Nestle's Purina brand reached $9.4 billion in sales last year, a 30% jump since 2011. The pet food industry in general has seen strong growth this year. Purina rival Chewy (NYSE:CHWY) explained to Yahoo! Finance the increase is "not driven by a second surge of COVID or the pandemic." Rather, it's due to ongoing trends and companies' ability to react to them.

Purina is of course just one segment of Nestle's far-flung operations, which include the production of many different brands. The company even attempted the rollout of a plant-based "Incredible Burger" in Europe earlier this summer. It also initiated multiple expansions this year, including a $450 million dry pet food factory in North Carolina announced this September. In addition, Nestle has begun an effort to tap into the eco-friendly, insect-protein market through a planned launch of bug-based cat and dog food in Switzerland, as Treehugger reports. This move suggests Nestle is "tuned in" to the pet sector's rising profit potential.