Please ensure Javascript is enabled for purposes of website accessibility
Free Article Join Over 1 Million Premium Members And Get More In-Depth Stock Guidance and Research
By Brian Stoffel - Dec 10, 2020 at 6:45AM

The business model these social media companies follow is not serving the world, or our country, right now.

Five years ago, I developed a framework of parameters to score companies and used it to help populate my portfolio. Over the years, only nine stocks have scored high enough to make buying them automatic for me.

During 2020 (a year that has thrown enough curveballs at us to qualify as a great test of my investing framework), these nine stocks have averaged returns of 160%. Truly, it's been a great tool for growth stock investing. 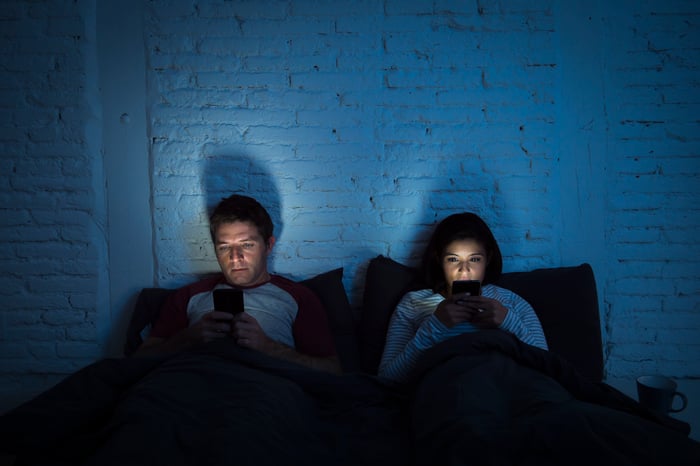 A personal experience changes me

We'll start with a sad story. This July, my 95-year-old grandma passed away. She and I were very close; though I knew her time would eventually come, it was a profound experience. But in a way, it also became a gift.

Before this happened, I had developed an almost-addictive habit of posting on Twitter. I was "engaged" in the social media platform. But it was more than that: My thoughts were grounded in how I could post something that could get attention.

That habit ended when my grandma's health began to fail; Twitter seemed utterly pointless in the face of this loss. One month after she passed away, I noticed a subtle shift. Instead of my attention constantly being on Twitter, it was on something right in front of me: my family, the activity I was doing. In other words, real life.

Only then did the consequences of my Twitter use become as clear to me. I went back and looked at the stats: My use of the platform fell 90% following her passing, and it has remained as low since. Twitter (and social media in general) can be fun in small batches. That's no different than, say, alcohol. But like alcohol, it can become absolutely toxic in larger doses.

Thus, it was with piqued interest that I watched Netflix's new documentary, The Social Dilemma.

What is the "social dilemma" we are facing as a society?

I won't give the full CliffsNotes version here. But the thesis of the documentary is pretty simple: Social media, because of its addictive nature, is inherently unhealthy for both individuals and society. Here's how Tristan Harris, the focal point of the documentary and former engineer with Alphabet's Google, put it in an interview with Joe Rogan: "In a system that's ... based on attention -- in grabbing attention and harvesting and strip-mining our brains -- you ... get maximum polarization, addiction, mental health problems, isolation, teen depression, suicide, polarization, breakdown of truth."

In the documentary, a slew of high-profile former executives at social media companies, from Google and Facebook to Pinterest and Twitter, all come forward to say there are major problems that will crop up if action isn't taken. Mental health issues and polarization fueled by fake news are the two largest threats.

This isn't about bad intentions

But the problem here is not the result of some evil cabal of supervillains looking to exploit our worst natures. In fact, many of the most-toxic tools on social media started out with genuinely good intentions. Here's how Justin Rosenstein, co-inventor of Facebook's "Like" button, describes it: "When we were making the Like button, our entire motivation was: 'Can we spread positivity and love in the world?' The idea that, fast-forward to today, and teens would be getting depressed when they don't have enough likes, or it could lead to political polarization -- was nowhere on our radar."

So while we might bemoan Facebook CEO Mark Zuckerberg, I think he genuinely wants to create a company that "brings the world closer together." I'm convinced that CEO Jack Dorsey believes Twitter can be a place where great minds get together.

Intentions are not the problem. It's how these companies stay in business that's the problem.

The real problem is the business model

Feedback loops are probably the most important (and oft-misunderstood) dynamics in the world today.

Let's take an example: If you stepped into the shower and felt scalding hot water, a healthy response would be to (1) get out of the shower, or (2) immediately turn the knob to a cooler temperature. Both of those moves would be based on a very fast feedback loop: your nervous system or your plumbing, respectively.

If, however, your nervous system or plumbing (or both!) had much slower feedback loops, you'd constantly be at risk for burning your skin. Multiplied over a lifetime of showers, you'd be looking at death via skin overheating.

The bottom line: When feedback loops are slow or out of whack, bad things can happen. (This is the key reason that investing is so hard: The feedback loop to see if you made a "good investment" is a minimum of three years. Anything short of that is just noise.)

When it comes to social media, the feedback loop is broken because users are not customers. Facebook, Twitter, Pinterest, Snap's Snapchat, Google -- at the end of the day, they are not here to serve you and me. They can only survive if they serve their customers (the advertisers) first. The best way to serve those customers is clear: Get users addicted to the screen. Remember: If something is free, you are the product.

Here's another way to look at it. If you subscribe to a Motley Fool premium service, nothing good can come from us feeding you false information. Don't get me wrong, we're not perfect and we do sometimes make mistakes. But if a company is boring but profitable, we'll say so. When volatility hits, we'll march out and tell you it's probably best to sit on your hands. Neither comment is very sexy.

Even on free Fool.com articles like this one, you can click on an author's name, check out the writer's CAPS score (here's mine), and determine for yourself if this person's track record warrants you paying attention or not.

The opposite is true for social media companies:

Is this my brightest vision for the future?

At the end of the day, those forces combine to tilt the scales decidedly against us individual users. As Harris puts at the end of the documentary: "Our attention can be mined. We are more profitable to a corporation if we are spending time staring at a screen, staring at an ad, than if we're spending our time living our life in a rich way."

One of my favorite investing quotes comes from Motley Fool co-founder David Gardner: "Make your portfolio reflect your best vision for our future." With Facebook, I can no longer justify holding my shares and saying this reflects my most optimistic vision for the future. I'm not so keen on Alphabet's data-gathering either, though I'm willing to cut the company some slack because of the promise of its moonshot projects.

Therefore, I'll be selling all of my Facebook shares, and half of my Alphabet shares, when Motley Fool trading rules allow. This isn't to say anyone needs to do the same. These are still two very anti-fragile companies that could be relevant for decades to come. But for me, what the companies are doing just doesn't square with my conscience.