Yesterday, shares of small-cap biotech Greenwich LifeSciences (NASDAQ:GLSI) surged by nearly 3,000% to an all-time high of $158.07. Today, shares are priced at $90.57, representing stock price growth of 1,650% in two days. The wild trading followed the announcement of positive clinical results for its sole immunotherapy candidate, GP2. Immunotherapies treat cancer by boosting the body's own immune system to fight it.

Are investors buying into irrational exuberance? Or did Greenwich find an effective treatment that can stop the recurrence of breast cancer? Let's find out. 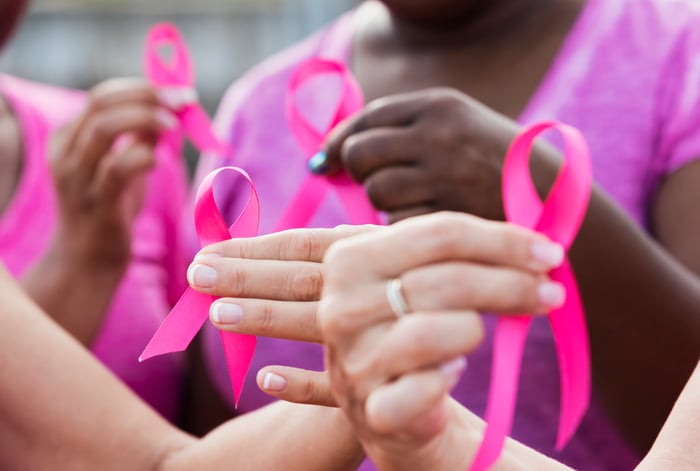 What's the hype all about?

The enthusiasm surrounding Greenwich stock seems to originate from a subgroup of patients who had 0% recurrence of their breast cancer within five years after treatment with GP2. In this placebo-controlled phase 2b clinical trial involving 168 people, breast cancer patients first underwent surgery for tumor removal.

Afterward, treatment to prevent the cancer's reappearance began. Some participants received treatment with trastuzumab, an approved immunotherapy, while some did not. Regardless of whether a study participant took trastuzumab, trial investigators randomized them into one of two cohorts, one with GP2 plus GM-CSF and the other with a placebo plus GM-CSF; GM-CSF is an approved immunoadjuvant that stimulates the performance of immune cells. Out of the four groups, the patients who received trastuzumab and then GP2 plus GM-CSF had no relapses of breast cancer.

Is the data really this good?

Unfortunately, there are more significant limitations to the study than meet the eye.

First of all, the placebo cohort also had a fantastic performance. In fact, only 10.6% of women in this subgroup saw a recurrence of their breast cancer within the same time frame. Compared to the GP2 cohort, the difference was statistically significant but not robust. For example, in trastuzumab's pivotal study, the drug demonstrated considerable efficacy in treating breast cancer.

More critically, among the two groups of patients who did not take trastuzumab, 22.4% of patients in the GP2 cohort saw their breast cancer relapse after five years, compared to 22.1% in the placebo cohort. In other words, the experimental therapy failed to prevent the recurrence of breast cancer in this instance.

Lastly, there are no results yet on whether cancer will return beyond a period of five years for patients in the GP2 cohort who were first treated with trastuzumab. However, the money, time, and effort required to investigate cancer drugs in decade-long trials is a problem that affects the entire oncological treatment industry. It's by no means specific to Greenwich LifeSciences.

Is the stock a buy or sell?

The main takeaway of the phase 2 study is that GP2 is somewhat effective at preventing the reappearance of breast cancer when given in conjunction with trastuzumab, but does not work on its own. However, the therapeutic still requires validation in a large-scale phase 3 study, which could take a few more years. So Greenwich LifeSciences would be a speculative buy, or perhaps a tiny investment for a biotech investor with a tolerance for risk.

That said, Greenwich certainly deserves credit for being able to advance an immunotherapy candidate to this stage while spending $27.9 million in research and operating costs since inception. Right now, the company has little cash and no revenue, so it would probably need to raise equity on these results to fund GP2's late-stage clinical trial.

If that succeeds down the line, then Greenwich shares could be up for a huge pop. The company only has a market cap of $1 billion as of Dec. 10. However, big pharma companies frequently acquire clinical-stage biotech companies with experimental cancer therapies in deals worth as much as $5 billion to $10 billion.

Since GP2 has a therapeutic signal compared to placebo at this stage, and the company is still a small cap, investors should consider opening a small stake if they find Greenwich intriguing. For those who don't like the volatility, are doubtful of the results, or want to wait for a better price down the road, check out these alternative biotech stocks instead.